Cousins & Cousins’ house both stands out and fits in to its street, but it’s the impeccable detailing that makes it really special

As the first project that Cousins & Cousins took on, Kenwood Lee House in London’s Highgate was something of a test case for Ben and Jelena Cousins’ business relationship when the husband and wife set up in practice together back in 2012.

Six years later, with the 650m2 project finally finished, it’s fair to say the gamble has paid off. The practice is now 17-strong and the house is shortlisted for numerous awards – as well as attracting the attention of a number of passing north London footballers enquiring whether it’s for sale.

Kenwood Lee House is a quietly impressive family home with a relatively restrained street elevation that belies the more radical moves within. The project stands or falls on the quality of its detailing – which has fortunately been impeccably realised by high-end residential contractor New Wave London, whose owner just happens to be the client.

Located near Hampstead Heath in a conservation area with many Arts & Crafts residences, this was a potentially challenging context for contemporary architecture. However the planning process proved straightforward, helped by both the unremarkable nature of the 1960s house being replaced and Cousins & Cousins’ respectful approach to the environs. Given free creative rein, it aimed to create a contemporary version of a double-fronted suburban villa, taking care in the street elevation to reference the eaves line, gable and pitched roof of its neighbour.

‘The front of the building responds to local vernacular as much as a modern building can,’ says Ben Cousins. ‘Clearly it’s not an Arts & Crafts building, but there’s an appreciation of those buildings in these streets.’

At first, this double fronted house with dormer windows looks fairly conventional, although closer inspection reveals a gently asymmetrical facade. Secondly, the muted greyish brick tones deliberately contrast with the area’s prevalent red brick, which the architect feared might feel like pastiche, and work better with the patinated zinc roof.

Inside, the axial hallway is the central spine of a logical symmetrical layout that leads through to the kitchen/dining room at the rear, past reception rooms to either side. However the triple-storey garden elevation is entirely glazed within a rendered frame in complete contrast with the brick front, maximizing light and views over the garden. Movable louvred hardwood screens can be moved as desired across the 9m high elevation for privacy, and to avoid it looking ‘too sterile’, says Cousins. ‘The front respects the street scene but at the back it’s unashamedly modern with a full width glazed dormer,’ he adds.

The real star turn is what Cousins refers to as the ‘big move’ of the house – a highly tactile, exposed concrete core, which forms a triple height atrium traversed by bridges leading to bedrooms on the upper two levels. Rising through this top-lit space are crisply elegant cantilevered oak staircases with bronze anodized steel balustrades. The bridges are timber clad except for that between the master bedroom and dressing room, which looks like Corten but turns out to be polished plaster.

But it’s the highly-textured finish of the 250mm thick concrete of the stairwell that really holds the attention – created using larch formwork arranged horizontally in bands of varying widths after extensive testing of different finishes and arrangements. In total, 25 boards were used per floor with no repeats, the carefully lined-up shuttering holes filled but still legible.

‘We knew the finish of the central space was key to the success of the whole building,’ says Cousins, adding that exposed concrete is rarely used in high end residential and has to be handled well.

There are five upper bedrooms including the top floor master suite, with two more at the front of the lower ground floor. Reached via a helical staircase, this lower level is an impressive 325m2, with facilities including a further lounge, home cinema, gym, pool, sauna, steam room, plus rooms for utility/plant, IT and even a car lift. Despite a large amount of dark oak panelling, the architect has managed to get a reasonable feeling of light into this potentially gloomy level – helped by a niftily-opening 4.2m by 6.1m wide window with counter-balanced sliding glazing, which opens onto a light well in the garden.

Elsewhere, highlights include an elegant 3m by 2m travertine double-sided fireplace – a definite nod to the marble of the Mies van der Rohe Barcelona Pavilion – that also neatly conceals the air-conditioning unit. The house is full of beautiful oak joinery – notably in the enviable dressing room where garments and accessories are displayed in internally lit, glass-doored cases akin to museum vitrines.

Yet this is not just a luxury design showpiece – its success is that it does feel like a real family home, helped by the relatively compact layout of the above ground levels and the warmth and tactility of the materials.

Gazing at the satisfying alignment of shadow gaps and beautiful finish of the concrete, Cousins is hugely appreciative of the client commitment and workmanship that enabled the practice to realise its first commission with such aplomb: ‘It’s been a special project because of the client’s  desire for perfection, and allowing us such creative freedom.’ 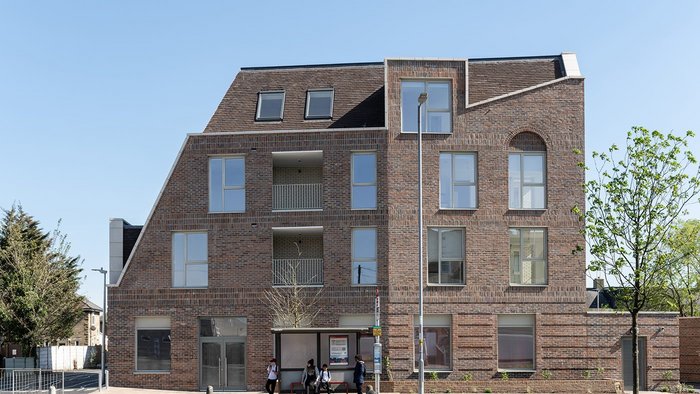