Much of the charm of this quirky and engaging house is a result of its Norfolk floodplain location – but was the house it replaced really so irredeemable?

Architects can sometimes be disparaging about the existing buildings on a site before they get to unravel their creativity on it. I have a friend whose former childhood home was described by the architect for its RIBA Awards submission as suffering from ‘decades of neglect’, ‘eerily cold’ and ‘draughty’ – even though it had been entirely refurbished a few years before the new owners. Convincing planning departments a development should happen can play a role in the words that emerge, but journalists should be wary of repeating adjectives like ‘rotten’ and ‘dilapidated’ which architects use to describe the homes most people are content living in. Since that experience with my friend’s house, I’ve learned to be more careful. 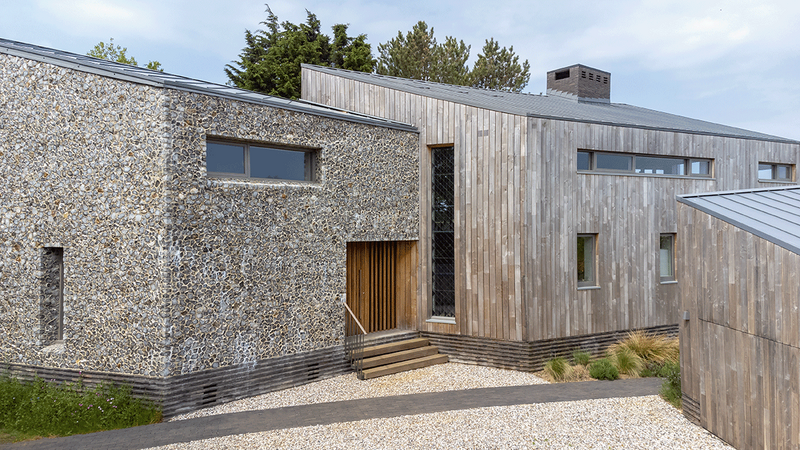 The three volumes of the building were inspired by the patterns in the bark of a tree, but also the client’s desire to build something interesting. Credit: Peter Cook

My thoughts turned to this again last month as I stood with Cowper Griffith architect Stuart Everatt in the zinc-lined loggia off the first-floor master bedroom at the front of Marsh Edge House in Norfolk. Below, on the narrow lane that leads past the house to the sea, a woman had stopped her car and was peering over the hedgerow at the new knapped flint and timber building with its dynamic angular roofs. She looked perplexed and then started talking to us, wondering if we might be the owners.

It turned out the bungalow that had previously been on the site was her mother’s home for 25 years until a few years ago. She recalled how it had been a happy place, full of memories and how it had been a ‘wrench’ to let go. Knowing the architect was in front of her, it was notable she didn’t say she liked the look of it now. She was more concerned to know if the new house had retained the name of the old.

Everatt hadn’t actually been too tough when describing the existing building to me. He only used a couple of the words mentioned, but it’s interesting to acknowledge how the themes of finding beauty in things ageing well and patinas in today’s architecture are only acceptable if they develop after a site has been renewed. Since we need to find ways to demolish less and reuse more, maybe we also need to find different intrinsic beauties like those reminisced by the woman at the gate – those less tangible and perfectly good. 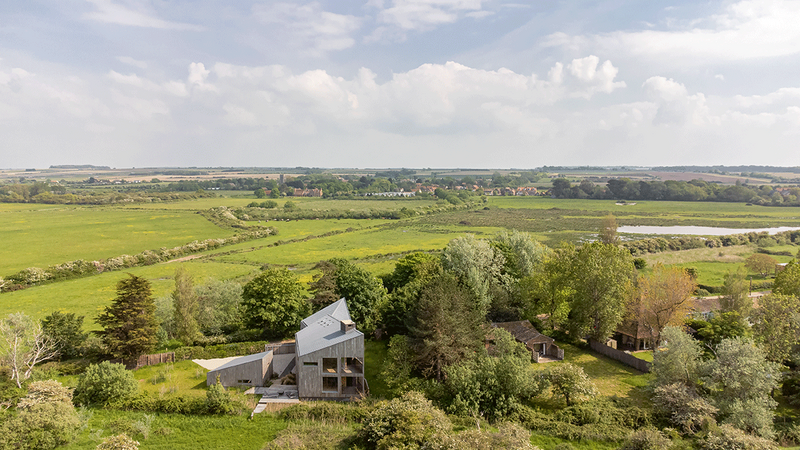 The house sits on a flood plain, at risk from the sea but also the surrounding marsh. Credit: Peter Cook

Marsh Edge House is the last home on a track that ends with the sea in north Norfolk, beyond Hunstanton. Twenty years ago, Cowper Griffith completed a house further back which the clients bought 10 years ago and loved. More recently they commissioned the practice to build a chalet studio opposite. When this latest plot came up, the clients decided to build a new home as well. The brief was to maximise the number of bedrooms, views of the setting, build as sustainably as possible and make a unique, interesting home worthy of its location. A row of conifers bounds one side of the triangular plot while to the north, the site is separated from the beach by a stream, the coastal path and three-quarters of a mile of salt marsh. There is a bird sanctuary at the end of the lane on the other boundary and to the south is the village. The clients are a musician and his family. He likes to paint and birdwatch, and would bring references to artworks to project meetings. You can see these interests coming through in the house’s architecture.

Memories of the site are not completely erased, however. The triangular arrangement of its three blocks, two collided together separated from the other by a miniaturised canyon leading to the sea, was inspired by patterns found on the bark of a tree on the site. The triangular theme is replicated across the finished building in the two-storey stained glass window by the entrance, the design of the stair railings, and the joinery of the bespoke oak fitted wardrobes in the ante room of the master bedroom used as a dressing room.

‘This is not a normal home,’ explains Everatt. ‘It has small purposeful bedrooms and there is an emphasis on living space. A major design focus was also around flooding because the house is right on the floodplain of the marsh and the sea.’

To the left of the plot is the main house, a flint-faced front block with an interlocking timber weatherboarded block offset behind. To the right is a double garage, also weatherboarded, which is being converted into a recording studio now the clients have decided to spend more time in Norfolk. The buildings step down in height from the conifers to the house then garage. The knapped flint is inspired by the local vernacular, albeit carried out in a more challenging contemporary way with continuous corners rather than traditional red brick coins. 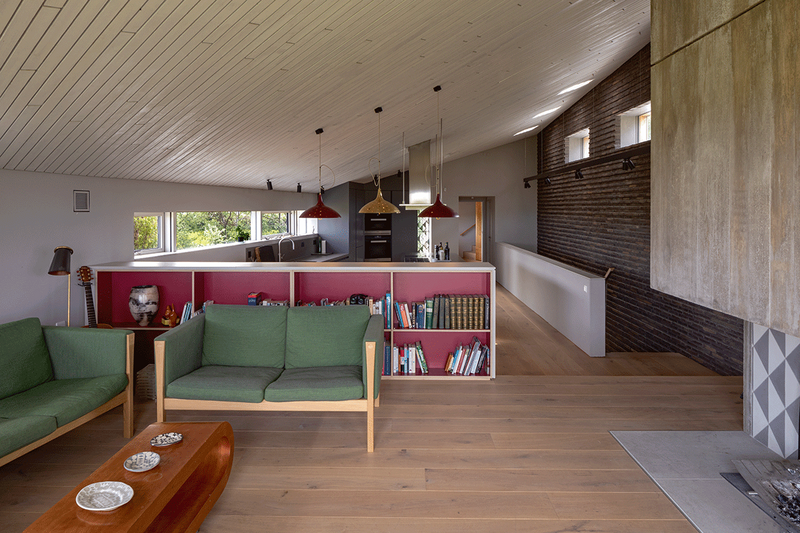 Looking back through the house from the living space, past the kitchen to the master bedroom suite. Credit: Peter Cook

Where the two volumes intersect along the central side is the entrance, set back with a deep reveal like the windows on the front elevation. The stained glass window creates a sense of arrival. As you climb the horizontal railway sleeper steps, you notice the building sits on a brick plinth around 1m tall. Through the front door, these bricks become an internal spine wall that stretches the width of the house and leads you up to the living space on the first floor – the ground floor is deliberately darker/moodier to add to this purpose. Also on the ground floor are two guest bedrooms and two bespoke bunk rooms with plywood joinery, designed to recall the tour bus. There is a TV snug, utility and family bathroom, as well as a rear veranda with an external store for logs that hovers beside the boundary ditch.

Upstairs is an open-plan living room, kitchen and banquette-seating dining area. Ahead, up more steps, a concrete boardmarked chimney rises through the room with a cutaway fireplace turning the corner between the living space and kitchen. Another veranda, stacked on top of the one downstairs, has even better views. The exposed hanging timber cladding is reminiscent of Swiss chalets. Back down to the kitchen, the focal point is the stainless-steel island with its open-fronted oak drawers. Horizontal band windows all along the eastern wall recreate the pleasure of peeping out of a bird hide and almost encourage you to recalibrate your behaviour; step about more quietly and speak in whispers.

Double-backing from the stair at the front of the house is the master bedroom with its own en-suite bathroom and the enclosed terrace. Here again, the level changes from the dressing area to the bed area, which is a theme throughout the house. The changes in level create idiosyncratic spatial experiences but were initially created to deal with the flooding risk. The hallway is high up enough in the event of the 10-15-year flood, while the snug and bedrooms that come off it each have their own short associated stair to raise you up again for the 100-year flood. The trick Cowper Griffith has pulled off so brilliantly is that the level changes happen so effortlessly and comfortably you barely notice them.

This carefulness is evident all around the house, which is stylishly quirky and engaging – you are in continuous dialogue with the architecture and its setting as you move around. That might become burdensome if executed badly but here the references and interactions create a subconscious context appropriate for a second home designed as a retreat and place to enjoy oneself. Downstairs, the CLT is simply white painted in the guest bedrooms, giving a kind of European holiday camp vibe. At the same time, the sliver of cork detail where the oak timber meets the wall is minutely accurate and refined. Everywhere there is a richness of materials: limestone hearths, encaustic and zellige tiles in the bathrooms, the blackened steel handrail, oak, ply, sweet chestnut, flint and concrete.

To many designers the array of materials and textures would spell disaster. But here it creates enough interest and architectural weightiness to give a sense that the home could endure. It’s precious in how carefully it has been designed, but less so in style terms, which is refreshing, easier to imagine living in. Maybe it is in that complexity that Marsh Edge House perpetuates the memories made in the old bungalow – and how you can see it becoming the site of many new ones too.