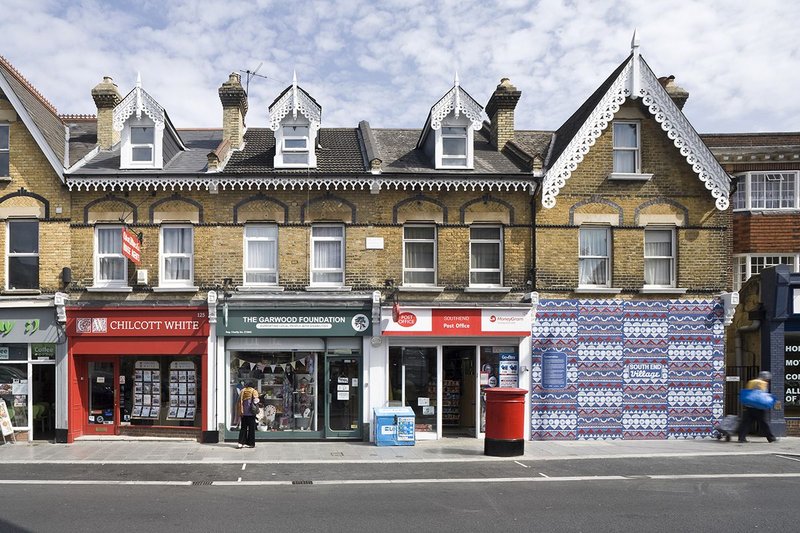 Many of the existing shops have started their own refurbishment . Credit: Jakob Spriestersbach

We Made That with Hassell for London Borough of Croydon

This regeneration scheme made it onto the MacEwen shortlist as a great example of a project that achieves a lot with little.

‘To do something with very little is a big deal,’ explained judge Steve Martin.

‘This project shows how on a small budget very small interventions can make a difference – that is giving a little attention and respect to the everyday, and understanding that adding a nicely positioned bench, for example, can totally change the way people interact on the street and make something feel safe that was previously not,’ said judge Amanda Levete.

The £2.8m scheme has transformed the streetscape of a key gateway into central Croydon to create a coherent and welcoming place. Improvements over an area of 14,000m2 have included a range of finely balanced proposals from extended footways and junction re-alignments to focused new public spaces, shopfront upgrades and economic support. Some distinctive interventions have amplified the area’s character and highlighted existing heritage assets. The elements of the delivered scheme combine to make the area more accessible, greener and more prosperous.

‘I found it playful and well done; it is a lovely little vignette. Suddenly it becomes a place where you might want to loiter rather than hurry along,’ said Levete.

The design team’s input went beyond physical improvements. Interventions included a vacant retail unit on the high street being transformed into the ‘South End Ideas Shop’ by construction students at Croydon College as a focus for community consultation on the project. Over the course of a month, residents of all ages, business owners, community groups and visitors dropped in to share their ideas for the street.

Although the panel agreed that the project’s success has coincided with a lift in the London economy in general, the high street was suffering a 16% shop vacancy rate which has dropped to just 5% since these small interventions – significantly below the national average.

The judges felt that the council had made good use of post-riots funding by visibly and socially enhancing the public realm. Multiple new trading licenses have also been granted to restaurants offering ‘al fresco’ dining on the new widened footways. Beyond the building frontage upgrades undertaken as part of the scheme, a number of shop owners have also begun to make independent improvements to their units. These are all positive signs that South End’s economic performance is improving, and that it has a lively and successful future ahead.