Hornsey Library is a modest triumph of the 1960s that deserves to be better known. Much used and loved locally, its architects – Frank Ley and GFS Jarvis – were modest local men. The building was never published in the architectural press, and most experts on the period had never heard of it until it was threatened with closure in 2000. Then a local resident campaigned successfully to have the building grade II listed. Twenty years on, it has been sensitively refurbished and finally recognised. 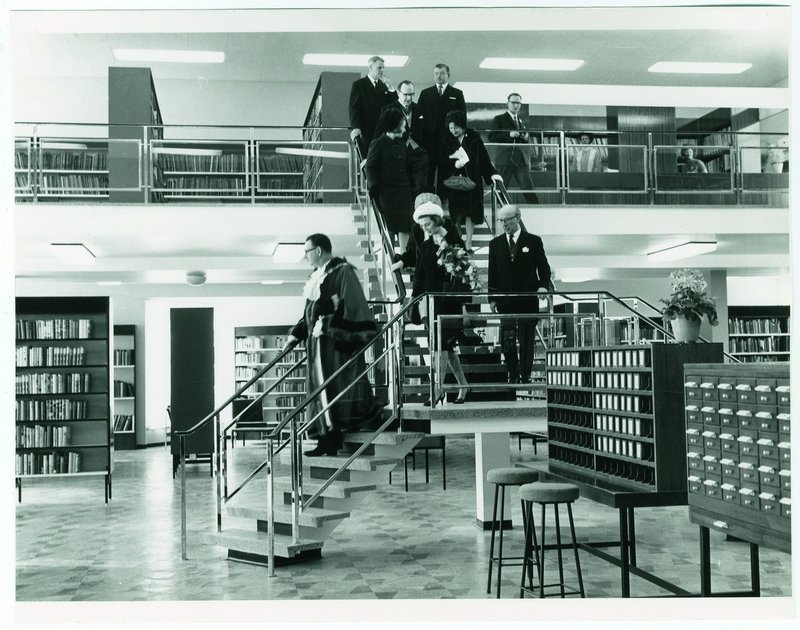 Opening of Hornsey Library on 5 March 1965 by Princess Alexandra.

Until 1965, north London’s tranquil suburbs of Muswell Hill and Crouch End had their own borough council, named after the oldest settlement in the area. Dubbed ‘healthy Hornsey’, it was Conservative yet progressive, preserving local woodland in the 1930s and building a modern town hall in the style made fashionable by Willem Dudok at Hilversum in the Netherlands. The library followed on the street behind in 1963-5 when the council splashed the last of its cash before merging with (Labour) Wood Green and Tottenham to form the London Borough of Haringey. A fountain by Thomas B Huxley-Jones features bronze reliefs outlining Hornsey and its medieval church tower while a window on the main staircase is etched with a decorative map by Fred Mitchell of Hornsey School of Art.

While it never appeared in the architectural press, Hornsey Library was acclaimed in the Library Association’s own journal. For years the association had run trips to Denmark to see the latest in library planning, but it was only in 1960 that a library in Britain was built on the same progressive lines.  Holborn Library featured separate children’s and reference libraries, a lecture room with its own coffee bar, and – most importantly – its lending library was on two levels. By introducing a gallery for all save the most popular books, the main floor could be left open for exhibitions and talks, with comfy chairs where visitors could relax.

So influential was Holborn that this sounds unexceptional today. Hornsey was one of the first to adopt the formula on a larger site. The double-height lending library is to the left of the broad entrance, with the reference library and lecture hall to the right, placed above the separate children’s library and reached via a wide staircase or a lift. Ley and Jarvis’s detailing was also rather Scandinavian, somewhat old-fashioned in the heyday of brutalism, but perhaps more inventive. The building’s precast panels have an abstract pattern resembling raindrops running off a series of blinds and there is a colourful mosaic. The bookcases are brightly coloured and the two staircases boldly cranked, each split into two flights and featuring open terrazzo treads.

The library’s renovation by Curl la Tourelle Head Architecture is a sensitive one, improving the building’s thermal performance with a new roof, windows and heating system. Inside, the architect has introduced a lift to give access to the lending library balcony and made a clever alteration to the popular children’s library to add space. But the brief recognised that any grand gesture was inappropriate as well as unaffordable. Most of the original features have been preserved, while carefully chosen additional lighting and furniture fit with its 1960s look – a little bit Scandinavian, a little bit Mary Quant.

Curl la Tourelle Head’s first concern was to repair the building envelope to eliminate leaks and draughts. Spalling to the concrete panels may look unseemly, but was deemed not to harm the building’s performance so has been left. Instead money was spent on a new and insulated roof. More difficult was the replacement of the glazing to improve thermal performance, for there are large windows to the street and a full system of curtain walling around an internal courtyard behind the main staircase. The replacement is double-glazed with an anodised aluminium finish but follows the pattern of the old, and it still has opening windows giving natural ventilation – particularly useful in Covid times. The most difficult part, job architect Richard Taylor explains, was to carefully ease out Mitchell’s etched panel from the old curtain walling and put it back into the new. That pane is still a single sheet and it is hard to imagine the delicate operation that has left it looking untouched. The courtyard garden has also been restored so it can be used again, a good example of the care taken on little details that give pleasure.

The main internal reconfiguration is to the entrance hall and children’s library. Crouch End is popular with young families, and the children’s library also works with local schools, particularly one for children with learning difficulties. It was made bigger by halving the originally very broad entrance. The remaining half will be used for self-serve equipment so readers can check books in and out themselves; the old desk where a librarian once sat in all-seeing splendour will be replaced by roaming staff, thought to be more helpful. New display shelving is chunky plywood, economical but with a nod to Alvar Aalto. The other half of the entrance has been used to create a space for children’s storytelling and events, separated by a new glazed screen and fitted with the latest video, audio and sensory technology. It is linked to the main children’s library, where the entrance is now through an illuminated golden arch, a sunburst through which the young users totter forth from their new buggy park. There are new book bins and low shelving on wheels, comfortable yet wipe-clean flooring and seating, as well as hanging lights.

The other major change is the introduction of a lift behind the entrance display to serve the balcony, part of which houses teenage collections and music. Otherwise the emphasis has been on repair rather than renewal. Bookcases have been restored in a labour of love which involved salvaging and reassembling bottom boards, panels and parapets from those deemed beyond repair. A similar but still more delicate operation in the former reference library involved cleaning the Perspex pelmets to the perimeter bookcases and restoring their concealed lighting, which casts a warm reflective light up the walls. The charming but tiny desks, each cranked to give a little space from its neighbour, have been moved to the café area and replaced by more practical tables with plugs and connectors. The café counter has been repaired, but otherwise it and the lecture room are little changed. IT has been upgraded throughout and is a major part of the building’s transformation. Enhanced LED lighting in the form of hanging globes is inspired by the original fixtures.

Money has only been spent where it shows, and the rear staff rooms – always rather tight – are little altered. However, inefficient heating has been replaced by a low NOx boiler along with a 29kWp rooftop system of photovoltaics. Based on initial use from late 2020, carbon emissions related to regulated energy consumption are predicted at 35.9kgCO₂/m2 annually, a reduction of 49 per cent, remarkable for a building with a very stretched-out plan and a lot of glazing.