Commissions for grand new architectural commissions don’t come around too often in Venice. A place culturally entwined with loss, death, and absence – whether James Bond’s collapsing Palazzo, Thomas Mann’s cholera-infected labyrinth, or the damp grief of Don’t Look Now – and perhaps anxiety and loss has also affected architects’ attempts to work with the city. Whether Le Corbusier’s sprawling unbuilt hospital, Calatrava’s completed but criticised glass bridge, or even Rossi’s Il Teatro del Mondo which only achieved its architectural purpose by floating away from the island into the mists, the city can be seem resistant to accepting new architecture.

It has had successful contemporary additions – Tadao Ando’s Punta della Dogana or OMA’s reworking of the city’s post office into a space of luxury consumerism, for example – though they rarely present themselves immediately to the city, but rather entwine and secrete themselves within the depths of existing architecture. The protected facades and urban set-pieces of Venice can remain apparently unaltered, while interventions conceal themselves behind a historical face. 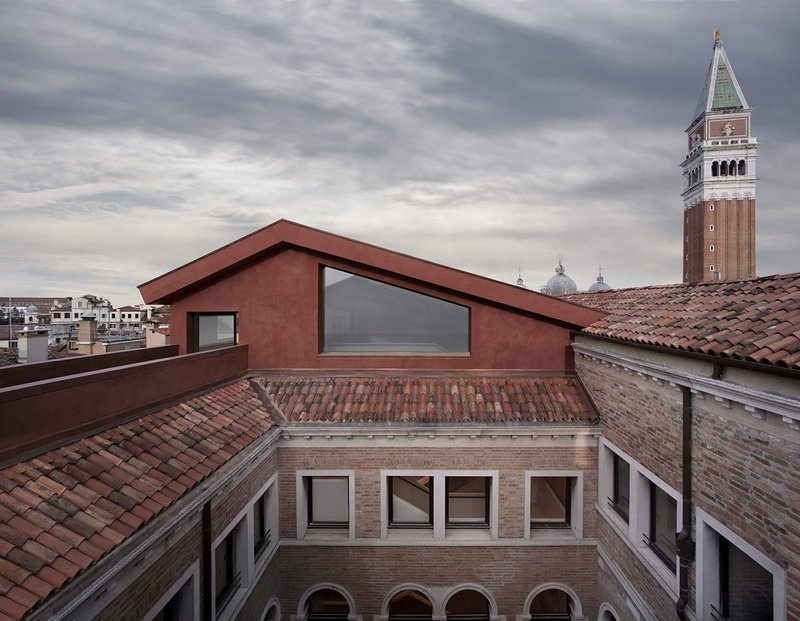 David Chipperfield’s Milan office is the latest to apply its touch to this most delicate of cities, with a restoration and reworking of the Procuratie Vecchie, one of the three colonnaded elevations of Piazza San Marco addressing and framing the Basilica. The Piazza – backdrop to the city’s politics, power and trade as rendered in celebrated artworks as well as billions of tourist photographs – reads as a continuous form, though its buildings were constructed as separate components over three centuries. The oldest, to the north side and the subject of Chipperfield’s attention, is the Procuratie Vecchie, begun in 1517 by Bartolomeo Bon, then continued and completed by Jacopo Sansovino in 1538, serving as base for public prosecutors.

A tourist in the Piazza would not realise anything has changed. Externally, there has been no scrubbing clean, no polishing or aspic coat. Instead, the architect has worked internally through a series of what it terms interventions, conjoining and opening up previously disjointed spaces across the building with respect and sensitivity to local craft and material. These interventions don’t so much impose a new architectural language on the historical, as jigsaw cohesiveness and clarity without overpowering – or, in the words of Cristiana Billia, associate director of David Chipperfield Architects Milan, ‘[demonstrated] utmost respect for architecture, guiding careful choices in a delicate balance between conservation and the integration.’

The client was insurance firm Generali, with the first and second floors – the firm’s most prestigious offices – now fully restored. The third floor has been opened for public use through Generali’s charitable arm The Human Safety Net, and previously publicly unseen loft spaces are now available for a variety of cultural and community uses. At the ground floor, discreetly away from the piazza, conservative and refined entrance lobbies are all that suggest there may be more above. From here, visitors can find information or buy a ticket, then stairs and lifts take them up into the reworked spaces.

One of the architects’ key interventions was to organise vertical access through the various levels. Some of the new staircases seem a million miles from the crowds, queues, and chaos of the Piazza outside, with a withdrawn monastic aesthetic which instantly introduces a calm and perfectly composed invitation to move through the building, a single balustrade leading eye and hand. Similarly, the lifts are immaculately detailed, a transition from bustling street to the repaired sanctity above.

One element, however, breaks the neat, minimal convention of the other vertical interventions: the Central Staircase leading from the second floor into a new offset-pitch rooftop pavilion, is a contorting form bathed in light from new openings inserted above. It is a single moment of architectural play, deep at the heart of the project, celebrating not so much itself but the notion of transition, dialogue and connection. From the pavilion, steps lead to a discreet roof terrace, a sequence of spaces not only read physically by the body, but also visually as the changing light gives way first to the pavilion’s external red Cocciopesto walls, and then to the terraces formed of crushed-tile recomposed terracotta – the architect considering these external materials as a dialogue of material rather than contrast.

This notion of dialogue is central to the building’s re-composition, notable also across the third floor, with the brief calling for public uses despite a challenging existing spatial configuration. An existing series of small rooms ran the near-length of the Procuratie Vecchie, offering beautiful glimpses of the Piazza through oculus windows but which were too boxy and repetitive for most potential cultural uses. Chipperfield has cookie-cut an archway through each dividing wall, connecting and celebrating the length of the historic building through a new sequencing. Formed of reconstituted stone, the resulting enfilade creates a new spatial dialogue, encouraging exploration and rescuing what could have been tight spaces through creation of an altogether more functional rhythm of rooms.

Billia embeds dialogue deeper still, beyond the building and into process: ‘Only the daily exchange of ideas between people representing the clients, designers, managers, companies and artisans made it possible to achieve such a spirit of continuous inspiration – which  Procuratie Vecchie will continue to have for the future.’

Clarifying its terminology, and rooting it within that artisanship, the architect considers deployment of two types of interventions: integration and revelation. The former includes the vertical and horizontal circulation, as well as the replacement of fabric damaged beyond preservation. Across all floors, uniform approaches were taken to unify the building’s parts, including covering internal walls with a Marmorino or Scialbatura finish. Throughout, new flooring has been laid in Pastellone and Terrazzo, and while the immediate aesthetic may read as any Chipperfield composition, craft, material and touch has been deeply contextual to both the historic building and Venetian craftmanship.

Giuseppe Zampieri, partner and director of David Chipperfield Architects Milan, states that the project began ‘with a highly sensitive reading of the Procuratie Vecchie in order to understand the nature of the building itself as the basis of any subsequent intervention’, and it’s from that reading spatially and materially that the new processes were introduced. Speaking of a continuing architectural history of Venice, he adds that ‘the [whole] building was a constant source of inspiration for us with regard to both its older parts and its more recent parts, such as the Olivetti Store, designed … in 1958 by Carlo Scarpa’. There is a clear lineage between the detailing of Chipperfield and that of Scarpa.

As part of its attempts to shift a focus away from mass tourism, Venice is working to rekindle its historically rooted skills in craft and making. Some, like Murano’s glass, have never moved from the place, while others, including woodworking and weaving, are reduced but clinging on. Local Terrazzueri craftsmen laid the floor with an expertise embedded in the city since the 16th century – a complex layering of earthenware fragments, pigmented pit lime, smoothed and compacted paste, then a boiled linseed oil polish. Each other process is equally as complex, profoundly connected to longstanding fabrication skills of the region, not just to appease the city’s conservation superintendents, but to sincerely embed the new architecture within the dense city that contains it. Chipperfield hopes that the Procuratie Vecchie can contribute to that movement, hoping to see ‘the building re-embed itself into the city, supporting Venice as a living place of activity and innovation’.

Aside from the central staircase, the other obvious architectural insertion is the auditorium. When the RIBA Journal visited Biennale was in vernissage week. Artist Antony Gormley – who has worked with Chipperfield on his studio and second home – was standing onstage discussing his exhibition in the Olivetti Showroom. The auditorium itself is a darkened chamber terminating the white enfilade, pitched roof timbers picked out with fine strip lights, rows of red seating, and simple stage. It’s a deliberately unspectacular, unceremonial recess within the whole, deferring to the culture it facilitates.

Other third floor public spaces have also been adopted for the Biennale. A retrospective of American artist Louise Nevelson fills gallery spaces of perfect proportion for her blackened wooden constructions. As with Gormley, one can read a dialogue between her spatial practice and Chipperfield’s, not just in each’s devotion to uniform shade – Nevelson’s blacks sit comfortably within Chipperfield’s muted whites – but also in shared desire to shape order from chaos, each artist subtly connecting, shaving, and rearranging a clarity from broken components.

Speaking of this process of delicate reconfiguration, Chipperfield states: ‘Repairing, reunifying and adapting the many layers of this historic structure has been a highly complex and rewarding challenge that reconnects us to the power of architecture both as physical substance and as a process of collaboration.’