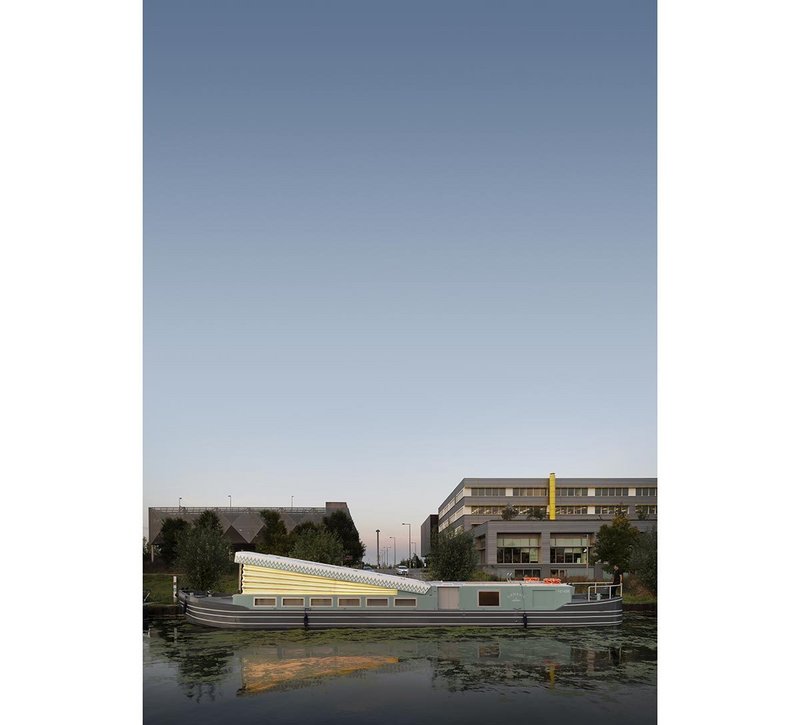 Genesis, the Diocese of London’s new floating church, is a building that shines, both literally and figuratively, out of its somewhat profane surroundings: the turbo-developed territory controlled by the London Legacy Development Corporation. Indeed, it’s a small miracle that Genesis came into being at all, given that the LLDC does not permit single-faith places of worship within its boundaries. There is a visible absence of community-led facilities within the Queen Elizabeth Olympic Park and its environs; something that this floating church aims to address through its radiant appearance and welcoming spirit.

The unusual project, which was designed by Denizen Works in collaboration with Turks Shipyard and the naval architect Tony Tucker, was commissioned by the Diocese of London to serve the parishes of St Paul Old Ford and St Mary of Eton, as well as reaching out to new communities. Though it isn’t the Diocese’s first foray onto water (it has another boat further down the Lee Navigation, where Genesis is currently moored) the mission of this floating church is to establish itself as a visual beacon of modern Anglicanism – the brief was to create a ‘conspicuous presence’. It has achieved this to great effect, although there’s little to alert the casual observer to the fact that it’s a place of worship. Indeed, what’s striking about Genesis is that it’s much more than a church. In addition to formal services, the promotional literature suggests that it might accommodate such activities as ‘parent and toddler groups, lunch and supper clubs, Pilates classes, support workshops and counselling’. In this respect it follows the growing trend towards mixed-use spaces in contemporary church design. Under the guidance of Reverend Dave Pilkington, however, Genesis goes further than most, welcoming people of all faiths (and none) to pray, meditate or just congregate for discussion – although this might be in part to get around the LLDC’s injunction against mono-faith buildings. This is predominantly a Christian space nonetheless and it’s in that spirit that one of its objectives is to bring people together to eat. To this end, the boat features a relatively large, high specification kitchen to deliver expanded versions of communion.

On winning the competition to design Genesis, Denizen Works’ Murray Kerr immediately thought of the floating church in Peter Carey’s novel Oscar and Lucinda. His ambition for a great glass church sailing through London was thwarted, however, by the realisation that it would have to tackle bridges. This led to practice co-director Andrew Ingham developing the idea for an inventive ‘kinetic’ roof that could be raised and lit internally to generate a lantern effect. The roof had the dual benefits of allowing the boat to navigate London’s waterways and creating a striking impression wherever it was moored, providing the ‘conspicuous presence’ required in the brief. Organ bellows were Ingham’s inspiration for the concertinaed roof, which is constructed from translucent sailcloth and lined with LED lights. He describes this, rather modestly, as a poetic version of a camper van roof but that doesn’t do it justice. When the roof is up, it does its job remarkably well – on a rainy afternoon, the lantern can be seen from quite a distance along the towpath and one can well imagine it attracting curious visitors.

Internally, Genesis is simple, pleasing and surprisingly spacious – it can accommodate up to 60 passengers when stationary, although Covid-19 restrictions mean it will be some time before this is tested. The boat is entered midship and comprises an office, kitchen and toilet to one side and a large ‘assembly space’ to the other. The latter gestures towards a traditional church, without any obvious or clumsy references. The separated window seats give a sense of side aisles and bays, while the central section is reminiscent of a nave, culminating in something like a sanctuary. This effect is amplified when the roof is raised, drawing the eye towards the compact, flat-pack altar. The design of the seating, which was custom-made by a local company, Plyco, picks up on the V-shaped water theme, which runs throughout the boat. On the day I visited, the seating had been arranged to recreate pews on either side of a central aisle, which added to the overall impression of a liturgical space. To be clear, though, there is no artifice here. It would have been a dismal enterprise to create an ersatz version of a church and the architects steered clear of that. Instead, this is a confident, authentic space that defines itself on its own terms.

Projects like Genesis are never going to replace buildings – indeed, some Pentecostal congregations in this part in of London are now having to build concert hall sized churches to accommodate growing numbers. The Anglican church knows it’s not so blessed and that, despite the burgeoning population in this location, the number of traditional Anglican worshippers is dwindling and diversifying – it will need to develop inventive strategies that cater to an atomised market. Murray Kerr is right when he describes the floating church as a ‘first step in our thinking about how communities can continue to be served as they grow and move away from traditional locations and building types’. Genesis illustrates how the Church might adapt to transient communities who have new ideas about what it means to be spiritual.

Genesis will be moored in its current location for the next three to five years, after which it will move on to serve other canalside communities. At present, it feels like it’s in the right place at the right time. As the architectural writer Alan Powers has observed, London’s canals are threads of resistance against the inexorable march of market forces and this miniature church, moored alongside growing numbers of houseboats occupied by people who can no longer afford to live on land, offers some respite from the rapacious development to the east. It provides a human scale space that is welcoming, warm and generous. The name is also fitting. ‘Genesis’ was chosen for its association with creation but when you’re inside the boat it’s hard not to think about Noah. This is a million miles from the Ark in both function and scale but one feels that, in the event of an environmental apocalypse, something profoundly human would be saved aboard this floating church.