A Devon cowshed converted into an archive, studio and gallery for sculptor Peter Randall-Page is distinguished by hand-made details in wood, stone and steel 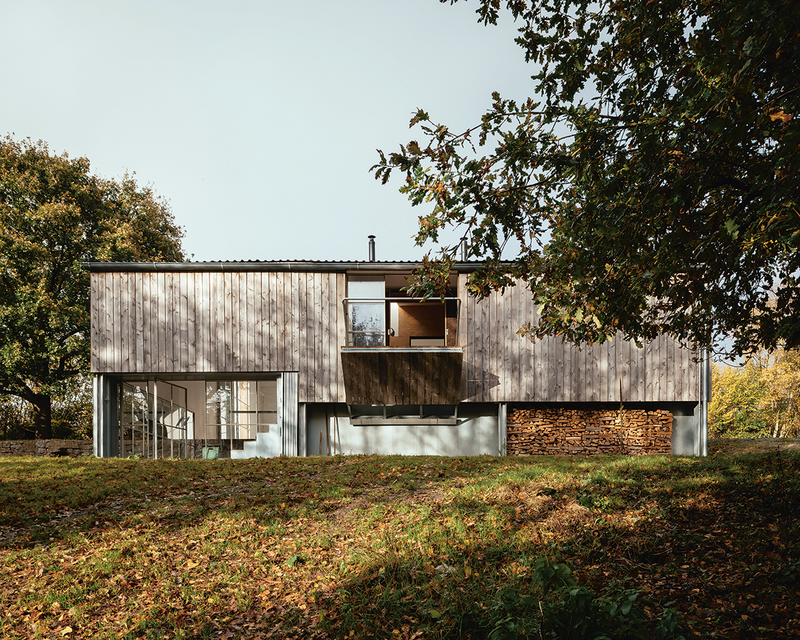 A folding balcony overlooks woodland that drops into the valley to the south of the building. Credit: Jim Stephenson

There is no postcode or street address for the Art Barn, an archive and private gallery constructed within a Dartmoor farm building for the sculptor Peter Randall-Page. I am sent a Google Maps pin which guides me to a narrow lane in open country. There to meet me is Thomas Randall-Page, Peter’s son and the architect of this unusual and delightful art space.

The barn is at the end of a rough track which runs across fields and into a wood that drops sharply into the Teign Valley. On the way, I learn the background to the project. Peter has lived and worked in this part of Devon for more than 30 years. Ten years ago, seeking a permanent home for his archive and a place to show work to clients and collectors, he acquired a dilapidated 250m² cow shed and entrusted its conversion to Thomas, who was then working at Heatherwick Studio but who has established his own practice during the course of this long project.

The artist’s brief was concise, asking that the building retain its agricultural character, and appear as a sealed box when uninhabited, but open up to admit lots of daylight and connect the interior to the landscape when in use.

As the track bends, the building comes into view: the east-facing gable end of a generic modern barn with a gently pitched roof, clad in vertical cedar planks. A group of large stone sculptures in front of a pair of industrial-scale sliding timber doors offers the only hint to what lies within. On the south side, a skirt of galvanised steel visible below the timber cladding and a set of metal concertina shutters offer evidence of the building’s remaking, but only subtle clues to what lies inside. ‘Part of the fun is the slow reveal’, says the architect. ‘Visitors approach not knowing what they’re going to get, and then the shutters open and they get everything at once.’

There’s a lot to take in. Spaces are arranged across three levels, with stone and steel stairs running between them. Low-ceilinged, intimate nooks open onto a lofty white-walled volume flooded with toplight. Slatted shutters cast shadows over walls and floors. There are carefully composed views within the building – between spaces, and of the way that sculptures touch the ground – and far beyond it to the woods and winding valley below. Local, inexpensive or agricultural materials – waste stone, galvanized steel and wood – are deployed in combinations of rough and smooth, light and heavy, and elevated by the attention lavished on every junction and detail.

The profusion of bespoke elements is a result of the evolution of the design over almost a decade – ‘slow architecture’, Peter calls it – but the main moves were quickly established in a weekend of sketching and model-making following Thomas’ initial site visit.

The original structure had been extended twice, on its south and north sides, ­establishing a tripartite arrangement onto which the programmatic mix of the Art Barn neatly mapped, with the building divided into three environmental zones, differently adapted for the storage, display and studio spaces.

On the north side, a lean-to shelter now contains a long, narrow store for drawings and maquettes. As the barn is off-grid, a stable climate is provided by heavy insulation, airtightness and sensor-controlled dehumidifiers powered by photovoltaic panels.

The soaring central space has become an uninsulated, unheated sculpture gallery. At each end, sliding timber shutters protect delicate glass and steel doors large enough to admit a mobile gantry crane. These openings frame views of distant hills, and with both doors open, woodland scents waft through the gallery. Outside, granite patios extend the exhibition space into the landscape.

The barn’s southern extension has been more radically remodelled. At one end, a curtained doorway leads to a kitchen and composting toilet. Below them, a new basement provides secure storage for valuable bronzes. In the south west corner of the extension, where the earth floor stepped down by about half a metre, further excavation has created a more emphatic half-level drop between the gallery and a wood-floored entrance hall. A Dartmoor granite retaining wall makes a distinctive demarcation bet­ween the lower and upper levels, and extends through a large window into the landscape, joining terraces that correspond to the interior.

Creating additional headroom also allowed Thomas to squeeze in a curious-looking cabin that stands on four tapering timber legs. Warmly wrapped in dark cork and heated by a wood-burning stove, it makes a cosy workspace. Known as the Winter Studio, this timber-lined room-within-a-room makes a conscious allusion to Antonello da Messina’s St Jerome in His Study, and has an animal-like character that suggests some continuity with the building’s past life.

The stairs that rise to the studio are characteristic of the richly inventive details found throughout the building. At the base, six polished stone steps terminate the low granite wall that rings the entrance hall. It was constructed by Peter’s team of masons who achieved tight joints between pieces of rugged natural stone by painstaking trial and adjustment. Above, a lightweight galvanised steel flight hangs from a bespoke bracket. Both were fabricated by a local company whose normal fare is farm gates and livestock pens. It also made slender window frames, chunky door handles and bolts, a space-frame stair and other items.

From here other intriguing marriages of materials are visible: the legs of the Winter Studio sit on flared granite ‘hooves’ – roughly scored with a grinder in a nod to the stone-cutter’s art – and a Douglas fir column supporting the roof is neatly notched into a granite post.

At the top of the stairs, another custom-made component exemplifies Thomas’ interest in the dramatic potential of moving parts in buildings. With a gentle push, a section of cedar cladding folds sharply in the middle to form a balcony overlooking the valley, operated by a hidden assembly of cables and counterweights.

Figuring out the mechanism was just one of many absorbing mini-projects made possible by the unhurried pace of the barn conversion. But why has that taken so long? It was partly a consequence of fitting work for a family member around other commitments, says Thomas. Economy too: with the architect acting as main contractor and a member of Peter’s studio team, PJ Dove, as project manager, and making components instead of buying them, the building was delivered for just £200,000. Perhaps just as important, father and son have enjoyed the journey. ‘It’s been such a luxury to have time for thinking, talking and drawing’, says Thomas, ‘and I do like buildings where the ratio of thinking-time-per-square-metre is high.’

Even with the constraints of an existing structure and a tight budget, the relaxed brief and deadline might easily have led to a building overburdened with ideas. Instead, the architect has used that freedom to hone and refine the project’s language and logics, drawing apparently contradictory qualities into harmonious tension: the building is both ordinary and precious, serious and playful, simple and sophisticated, Art and Barn. 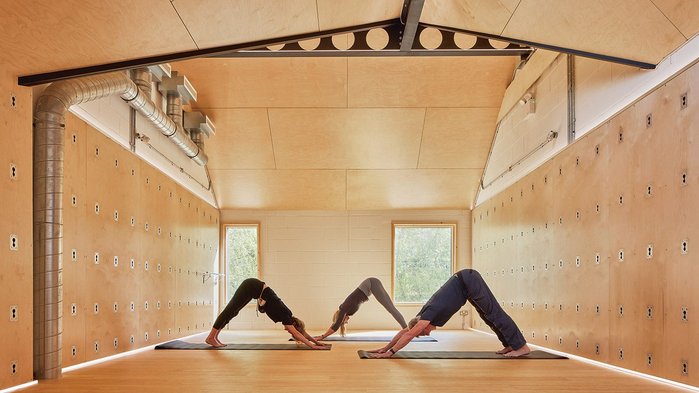