It almost looks like a traditional home but Surman Weston’s house on the edge of London trips your senses with spirits of California, a noble barn and the ghost of suburbia 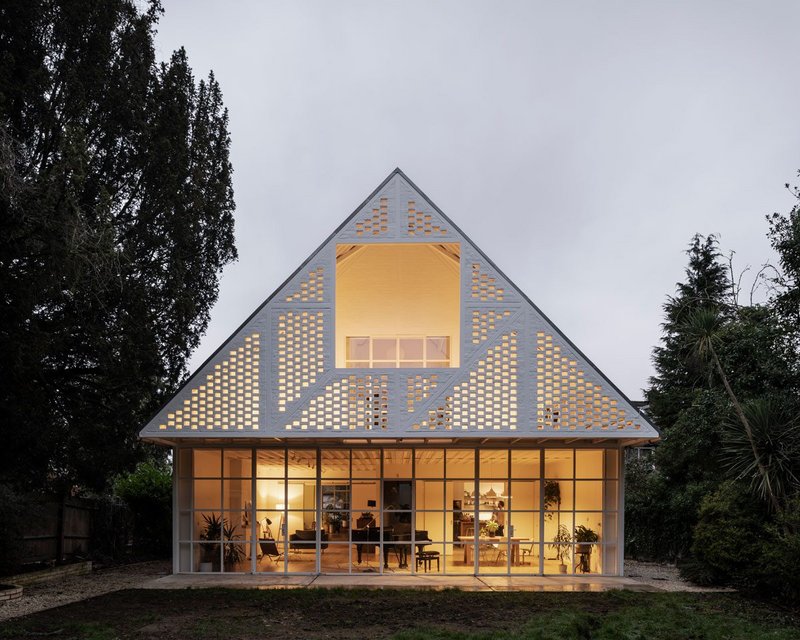 By London standards – and we are right on the south-west London fringe here – this house is a modest, two-bedroom low-budget number, albeit on a sizeable plot of land previously occupied by a much-extended bungalow. This is Surbiton, which is so much of a commuter-generated suburb that for 30 years in the 19th century its official name was ‘Kingston-Upon-Railway’.  When nearby Kingston-upon-Thames finally got its own railway, they reverted to the Old English name for the area: Surbiton means  ‘Southern farmstead’.  Apt in a way, for there is something of the noble barn about this house.

There is something of much else too, for this is a home with multiple visual references. On the one hand you have a young architect, Percy Weston of Surman Weston, fascinated by the surrounding interwar, often half-timbered, occasionally white Art Deco, domestic context, not to mention the white-Deco listed railway station; and on the other you have a very engaged client, boho fashion designer Amanda Winship, who wanted an industrial, almost Californian, aesthetic.

The building they thrashed out between them is a delight, like a ghosted-out version of suburbia. Set well back from the street behind mature trees as many houses here are, implied half-timbering is reinterpreted as an exposed steel frame that is only faintly visible, being painted the same white as its (good quality, handmade) brick infill. Mastic joints between steel and brick take up differential expansion and are also painted out: no cracking has occurred, even after this year’s heatwaves.

The face it presents is a gently subverted child’s drawing of a house. There is the pitched roof, front door, window.  Nothing else (a chimney is tucked away to one side at the back). These simple elements are made hyper-real. The front door and the window are both very large, and arranged not quite symmetrically either side of the centre line.  The door is set in a deep angled reveal acting as a porch, with shallow steps rising to it to emphasise its importance.

It is on the garden front that the barn makes an appearance. An Alpine granary or hayloft, maybe. Here the roof projects in a cowl to protect the full-width balcony to the main bedroom. The client wanted visual privacy, so the balcony retreated behind a complete gable-end of perforated brick, again set within the steel structure, here coaxed into a large square picture-frame aperture. It is the same dimensions as both the bedroom window behind it and the equivalent window at ground floor front.

The low flanks of the house, though treated in the same painted frame/brick infill way, scarcely impinge and nor does the super-insulated zinc-panel roof with its factory-sized electrically-opening rooflights: this house is externally all about its front and its back. What is solid at the front melts away at the rear, where the perforated gable hangs above a ground floor of metal-framed, thermally broken industrial glazing. The strength of the exoskeleton allows this look-no-columns feat of visual gymnastics for the two bays and 12m span of the main living room.

Inside finishes are mostly industrial: floors and stairs of exposed-aggregate concrete, soffits to ceilings just the painted metal undersides of floorslab forming trays, surface-mounted electrical trunking, slurry-painted blockwork partitions, raw steel and mesh stair balustrade. The only obvious touch of luxe is the oak flooring (with underfloor heating) and door joinery in living and bedrooms. Downstairs living and study spaces are in enfilade, separated by sliding doors.

There is space though, and not just outside. The house is larger than it might appear, and its volume is fully exploited in the entrance atrium, rising to the roof soffit with its stair set at 45º to the rest of the house. This move generates a lot of tectonic energy and – combined with a carefully-contrived glimpsed ground-floor view right through to the garden at the back – cracks open the orthogonality of the plan.  More prosaically, it generates space for a utility room behind the stair and a side door to the garden.

When I show non-architects pictures of this house, the response tends to be that it looks sweet, like a doll’s house. There were no planning objections to the design. In actuality the sweetness is cut with considerable astringency. And as Weston remarks, if anyone in the future wants to strip off the white paint, expose the creamy brick and pick out the exoskeleton in another, perhaps startling, colour, he’d have no problem with it.