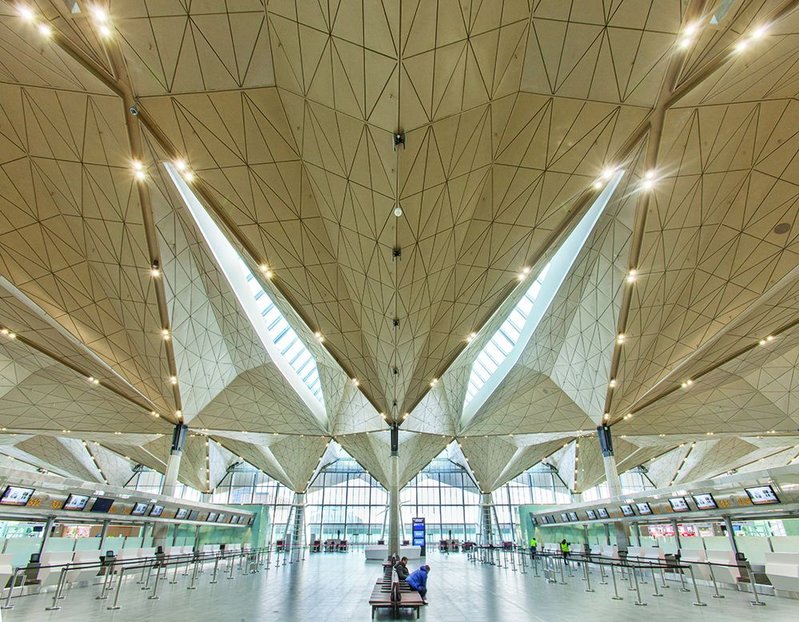 Plate tectonics: For once Grimshaw espouses surface rather than expressed structure, to dramatic – and golden – effect.

Modern airports aren’t exactly known for their local character. As famously discussed in the anthropologist Marc Auge’s 1995 book Non-Places, they tend to have much more in common with each other than the cities they purport to serve, and air travellers often feel as though they’re passing through some kind of purgatory between countries, with the same shops, the same endless corridors, the same gloomy baggage carousels, completely unconnected to anything like normal space. It’s a conundrum for any architect who has to design a new airport: how to give such a technically demanding piece of infrastructure anything like a satisfying architectural experience that achieves a genuine connection to the place it serves? The first phase of Grimshaw’s new Pulkovo Terminal, serving St Petersburg, attempts to do just that. 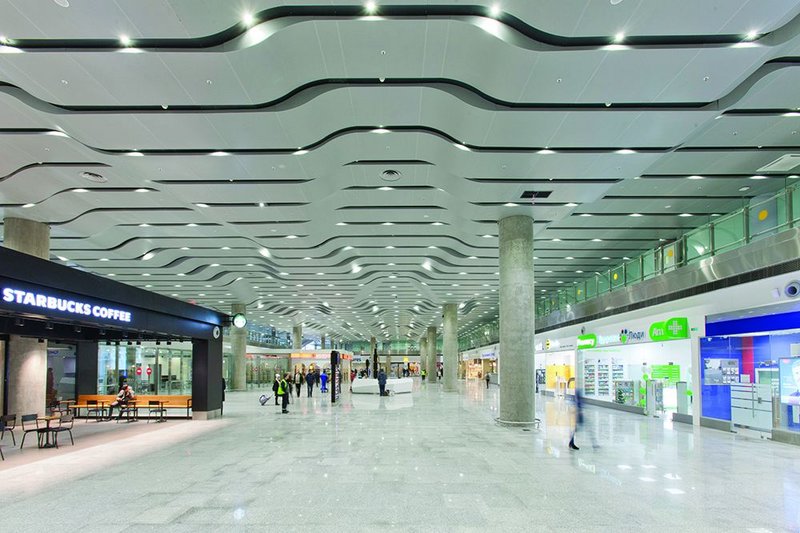 The roof beneath the roof: the arrivals hall has its own very different soffit treatment.

‘This is about surface and modelling the light. It’s not the finer detail, it’s about the bold pen strokes’

Designed to service 12 million domestic and international passengers a year, Pulkovo is an airport in the big-shed manner, where a big rectangular volume, here about 160m by 300m, is defined by a large roof structure with the maximum column spacing that can be practically achieved, in this  case a grid of 18m by 45m. It is a split level terminal, meaning that the arrivals come in at low level, the departures leave at high level, and sandwiched in between are the services and baggage handling systems. While this is an efficient and effective way of reducing the sheer size of what are usually massive buildings, it often means that one set of passengers get all the best of the architecture, while those on the way in are shepherded straight into the basement. Or, as Mark Middleton, Grimshaw’s partner in charge of the project puts it: ‘Why do airports always celebrate departure, and not arrival?’ 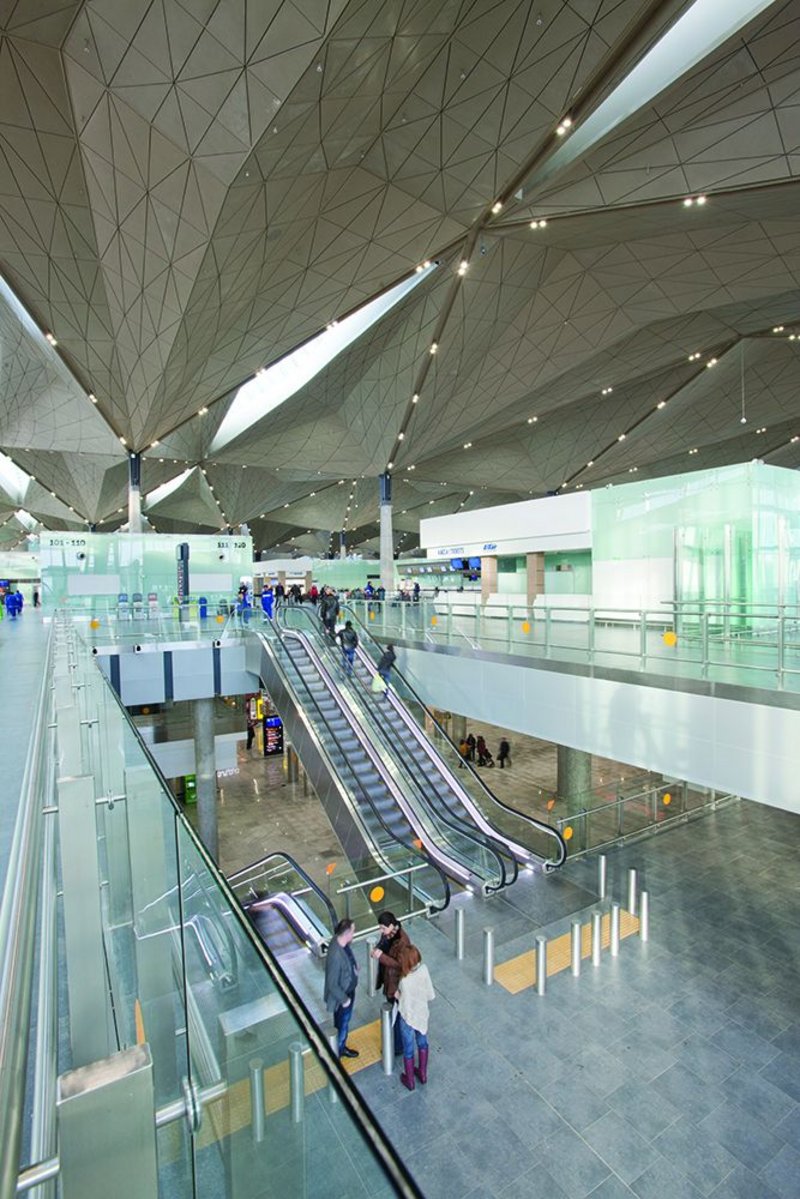 Visually connecting the levels, the main floor slab is removed at key points.

As a result the architect decided to open various voids in the departures floor above the baggage retrieval spaces, in order to bring light down and encourage a greater sense of connection between the two functional areas. This wasn’t easy, for example the baggage handling services had to be routed through bridge structures which lead outgoing passengers past passport control, a strategy which made the baggage engineer’s life more difficult, not to mention the loss of floor area in a typology which requires a high degree of flexibility for future change. But the lightwells were considered vital to improving the arrivals experience.

Climate also constrained the design. The high latitude of St Petersburg means low sun is common, and to compensate, the edges of the building are less transparent than one might expect, although this has the advantage of letting the airport build structures right up against the wall should they want to at some point. The other main local challenge was snow. From the beginning, the need to balance snow loadings meant a near-flat roof was a necessity to avoid the inevitable build-up that would occur in valleys. 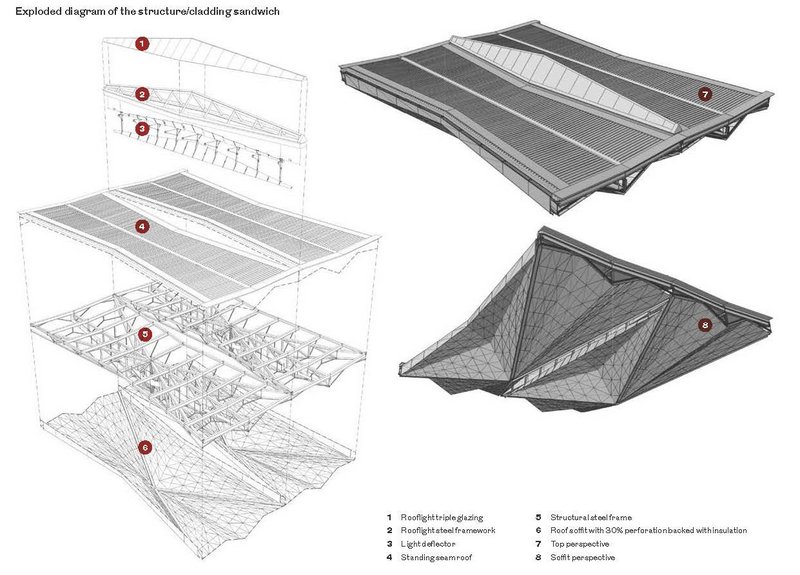 As is usual in such big-shed buildings, the roof soffit is the most dramatic architectural element. It consists of tree-like trusses, which spring from the tops of the concrete columns, meeting the next set at the corner. This is advantageous because it pulls away from the edge of the building, making it easier to extend the project by adding another few bays of the structure and rebuilding the curtain wall at the edge (the intention is for a later phase to increase the capacity to 17 million passengers a year). These trusses define a triangulated, folded interior form, which is also ‘peeled’ apart to create long rooflights all the way down the building. Aluminium panels clad the underside of the roof, cut so that they draw curves across the surface. A seamless skin is quite a departure from the Grimshaw norm, however: ‘We’re known for the separation of structure and skin, of celebrating those individual elements,’ explains Middleton, ‘but a lot of the team’s technical competencies weren’t necessarily in very fine steelwork. So I said: “This is about surface and modelling the light. It’s not going to be in the finer detail, it’s about the bold pen strokes”.’ Overall it’s quite something, like the distant offspring of Foster’s original modern airport at Stansted and Yokohama Port Terminal by the much-lamented Foreign Office, albeit far more accomplished.
The roof is also a slightly luxurious tint of gold, which returns to the question of place: how has Grimshaw gone about tying in to the spirit of the city? Well, first, points out Middleton, ‘St Petersburg is a city of islands and bridges’. 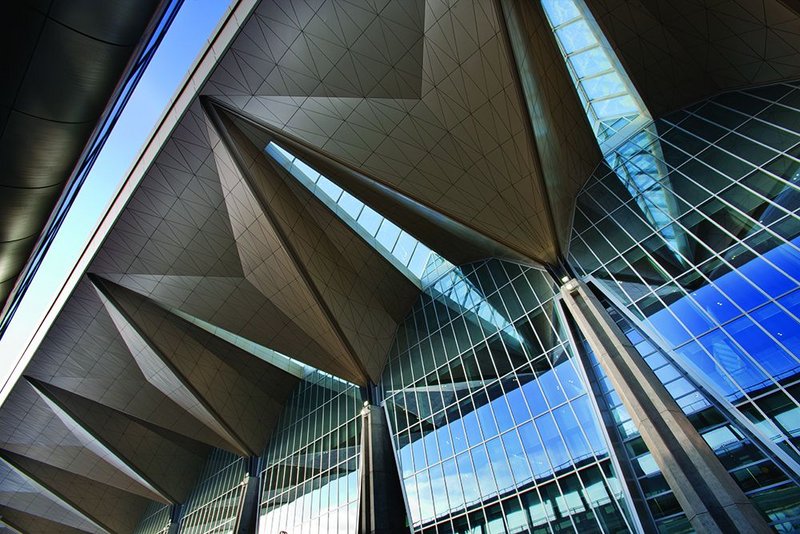 A series of rooflights are expressed as sharp cuts in the folded-plate roof.

The strategy of large cutouts in the upper floor slab came to the team as a response to the urban character of St Petersburg and its many canals, while the golden colour of the roof surface is partly a response to the gilded onion domes of the city churches, and, slightly more tongue in cheek, the folded stars that still adorn many Soviet monuments and buildings in the city. Other points of reference were the ornate ceilings and interiors of rooms in historic St Petersburg buildings such as the Hermitage. The hope is that these touches, which certainly helped bring the client on side, can also help the locals become attached to the new building. ‘There’s nothing so insulting as a ­foreigner coming in and saying “Well actually this is what your country is about”,’ suggests Middleton. ‘You’ve got to take elements or ingredients and synthesise them into something new that’s authentic; that isn’t pastiche or derogatory in any way.’

Surprisingly Pulkovo is the first full airport terminal Grimshaw has completed, ­after its Zurich Airport extension and a couple of piers at Heathrow. But it’s already a ­serious transport specialist, with a great many large train stations to its name, including the old Waterloo International, which was basically an airport terminal right up until the moment one boarded the train. Aviation is a market Grimshaw is trying to grow into, but one which Middleton thinks is changing course, with a greater separation of technical functions across different locations. ‘In future, passengers will go to a more leisure oriented space, a bit more “lifestyle”,’ he suggests. ‘I think the days of the large terminal may be ending.’

Sketch section through the airport showing the clear relationship of upper departure hall to interstitial services level to the arrivals hall at the bottom. Grimshaw’s desire to connect the two halls is evident where cutouts in the departures hall allow views (and columns) up to the roof. 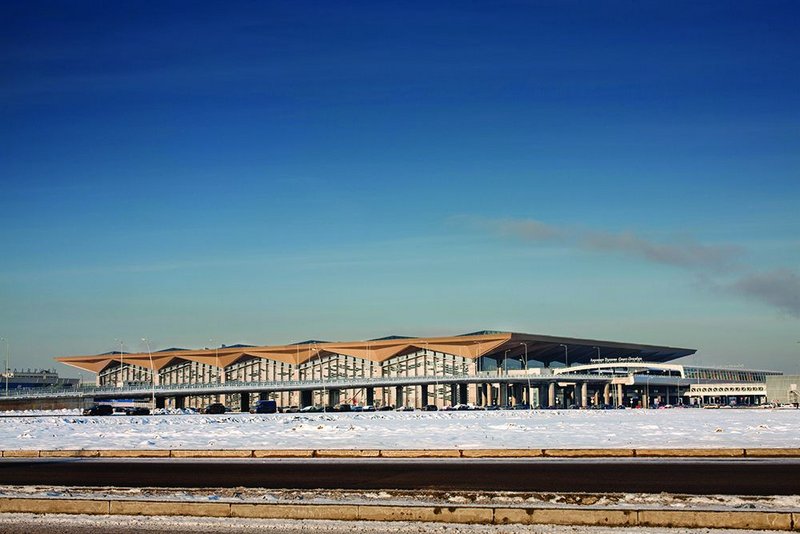 It’s a familiar typology, showing its line of descent from Foster’s Stansted, but geometrically adventurous and adapted to climatic conditions.