Watchet is small town, sandwiched between the Quantock Hills and the muddy, dramatically tidal North Somerset coast. It has two Co-ops, a Spar and six pubs. There are takeaways and gift shops for tourists in search of bracing sea air, fossils and angling.

And now it is has the extraordinary East Quay Watchet. Its salmon pink cliff of concrete rises to embrace the town’s esplanade, a candy-stripe Punch and Judy puppet theatre and five improbable beach hut accommodation pods popping out on top (two on stilts). The form is extraordinary enough, but most extraordinary of all is the warmth of life emanating from East Quay. Café, gallery, workshops, an all-singing all-dancing education room, new streets and courts... on a blustery grey day this place seems to contain a whole world of activity and possibility. It would be correct to call East Quay Watchet a community building but that is a massive simplification. Perhaps we could settle for a community enterprise building with art gallery and eyries for rent, Airbnb-style.

The client is the Onions, more formally, the Onion Collective, originally four Watchet women, moaning in the local over a cider, says one of them, Georgia Grant. They asked themselves what could be done for their Watchet community, starting with a series of conversations with their town neighbours about what the town needed for a stronger future.  The Onions (named for the adding of layers and flavour) came up with a plan for this spot and then secured the site and the money for the £7.3 million building,  and are now running it calculating social impact as carefully as the finances. They have thought through the ethical offer in the shop and figured out how to use the Kickstart scheme to help Watchet youngsters grow in confidence through working at East Quay, embed tenants, and fill in for everyone else, waiting at tables if needed.

What started it off, other than the cider, was the development site at the end of the Esplanade, alongside the harbour and marina. Urban Splash had the option on it, there was a competition won by Riches Hawley Mikhail and plans for 83 flats, information centre and restaurant before planning and re-evaluation intervened. When the council decided to do something different with the site in 2014 the Onion Collective was ready to step in, already having secured a grant for consultation and a feasibility study. The idea was for a joyful, playful cultural space more embedded in the needs of the town. They started looking around for architects, starting with googling young, interesting practices and inviting them to come and visit. Piers Taylor’s Invisible Studio stood out for its energy and materiality and because the Onions needed an advocate and champion who could convince the council. Invisible Studio is happily based in Somerset too, though over two hours away. But it wasn’t a simple brief and design. It emerged and morphed with a series of sketch schemes as ideas were taken to the wider community at regular intervals. 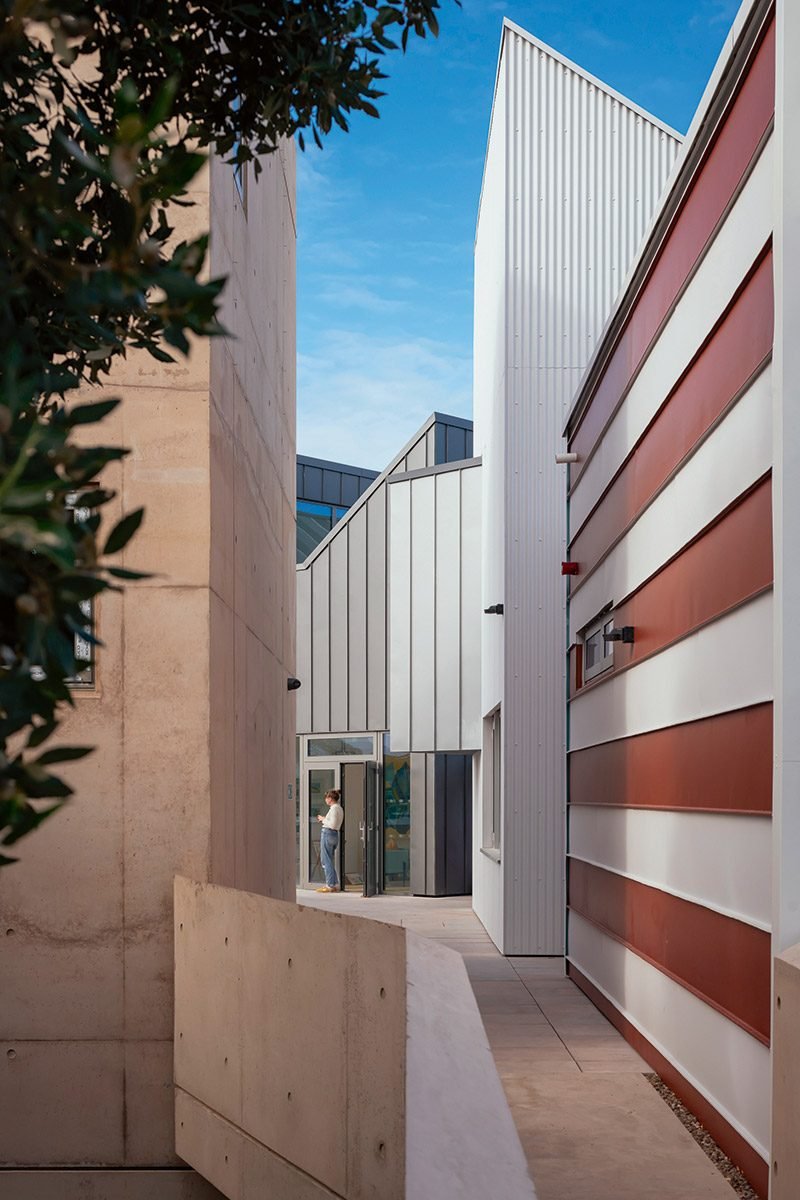 From the coast path alongside the steam train, East Quay is signalled by its candy stripe volumns, and gradually revealed as you enter a ‘street’ at first floor level. Credit: Jim Stephenson

It is worth another quick diversion here. Those answers about the future of a strong Watchet became urgent as the town’s paper mill and main employer closed in 2015, and with the loss of some of the promises of the Urban Splash scheme. Tourists – many of them arriving on the steam train from Minehead or Bishops Lydeard – needed to be captured, so a fast track £340,000 project was launched – with both the Onion Collective and Taylor and architect Louise Crossman – to do up Watchet Visitor Centre and Boat Museum in its Brunel shed, and extended  to create an information centre that doubles as a town council chamber.

Back at East Quay two fundamental ideas were emerging: it needed to be able to develop as funds were secured and it should be part of the town. The final form put the investment in the grainy solidity of the concrete plinth and allowed the other timber-framed elements to grow out of it at a slower rate. The brio of the formal gesture has echoes of FAT’s houses lightly and laughingly perched atop a block of flats in Middlesbrough. But for Taylor the move is more akin to the timber excrescences on warehouses, or the jettied-out house that he points to in a hidden corner of the town. And the scale of the upper floor pods ties East Quay to the town’s assemblage of buildings from which this scheme emerges. There are little twists in the volumes, with windows cut in – avoiding demanding too much from the view, creating protection, not simply exposing them to the sea. For hundreds of years this has been how we have needed to build so it feels a more natural form than the glazed expanses of Grand Designs homes. And, endearingly, this composition of lookouts has just a hint of alert meerkats.

The V-plan of East Quay engenders a sense of protection and town-ness along the first floor ‘street’. Entering through the narrow alleyway from the coast path alongside the steam railway, you are stopped by the candy stripes and enticed through the volumes of the building into this street and the big view of Bridgewater Bay. Past that are more intimate views, with sunny, south facing maker studios showing off work. With stairs linking to the town at either end I imagine school groups racing up from the Esplanade to the Creator Space education room, gallery-goers proceeding to the harbour, or holiday visitors meandering from the stairs back to their pods. On an off-season Tuesday, with construction work continuing on the upper levels, there is still plenty to look at leaning over the railings: visitors, print and paper makers from the studios down stairs, and two incongruous bright blue shipping containers in the courtyard.

The idea was for a joyful, cultural space embedded in the needs of the town

The containers are emblematic of this building. They were the pioneer settlement before the construction got going, with artists using them as studios and gathering to eat and for talks in the broken concrete slab courtyard between them. Owing to the Onions’ attachment to both containers and concrete, they survived the desire for the new building and stayed, the containers sitting in a landscape studded with remnants of the rough concrete in crazy paving form, softened by gravel and plants. It is a bit farmyard, bit back garden. It is this sort of thinking, by the Onions and Taylor, that means that the incongruities that crept in from Stage 4 as the design was taken on by Warrington-based Ellis Williams, are more easily overlooked. It means that the detailing is neither here nor there (though doors and ironmongery are harder to ignore).

For Taylor, who has long been designing smaller education buildings alongside an eclectic mix of houses and inventive rural structures (oh, and that TV career) it is a great disappointment that he didn’t get to see this major project through construction. The Onions felt they needed someone who had done galleries, a practice that could do work worth £150,000 at risk while grants were secured – a larger practice. Taylor’s relationship with the Onions survived though – they now teach for his studio on design and making at Reading University giving a perspective on community building. And what is missing in detail design in much of the building is being brought to life in a spectacularly fun way by PEARCE+Fægen, a group of two young architects and an artist who moved down to Watchet to do the interiors. They teamed up with an educational physiologist to invent the Creator Space, which lined in ply with a landscape of stacked platforms working as climbing frame, hiding place, storage and seating. Or you can sit on inflated fabric coloured balls that you take down from the walls. The lights do almost everything in colour.  PEARCE+Fægen also took on the interiors of four beach hut pods. The group has inserted mezzanines and a hanging stair, a lounge space in a suspended net, it uses colour to create a sunset bathroom and made an etched illustration to draw out the story of Watchet over high walls. These are not holiday homes so much as sherbet explosions of experience. Just like this building is much more than a gallery, studio space or café.  Looking at this place you feel Margate missed out when it got Chipperfield’s Turner.