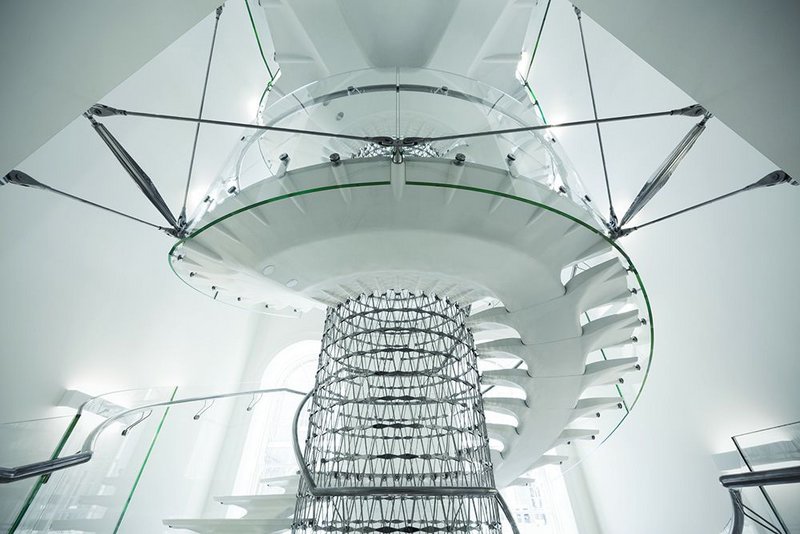 Eva Jiricna is known for three decades’ worth of exquisite staircases, usually with treads of glass. Her latest stair, however – engineered as so often with her projects by Matthew Wells of Techniker – is rather different. It’s a more solid affair, as befits Somerset House in London, and is the latest phase of the continuing project to turn the whole of this ­Georgian one-time home of tax inspectors, naval captains and arts institutions into a cultural centre.

In fact it is the last of several projects there by the indefatigable Gwyn Miles, just-retired director of the Somerset House Trust who before that was in charge of the Victoria and Albert Museum’s building programme. Miles, an honorary fellow of the RIBA, is one of architecture’s great patrons. ‘She is demanding and strict but extremely capable of getting the best out of people,’ says Jiricna. ‘Without her, her team and their support we may well have started the race but never finished.’

This staircase is at the north end of the west wing of Sir William Chambers’ original complex, a place with some dauntingly daring precedents including Chambers’ oval Nelson Stair. But the site of the Jiricna project was a nondescript 1960s stair put in by the previous tenants, the Inland Revenue. For access, Miles wanted a proper circulation core including lift – this part of the building houses many of the ‘creative industry’ tenants in refurbished spaces that provide an income stream for the Trust. There was insufficient room for both stair and lift in the existing well, so it was decided to remove a stack of floors to make a wider shaft, bringing it up to the edge of the building. ‘We were aiming at a simple and beautiful sculptural object floating freely in the space, enriched by elements of the original fabric, with the windows bringing in light,’ says Jiricna.

For durability of treads and landings – this is an attached stair, not a true spiral – Techniker suggested Lafarge’s Ductal, an ultra high performance fibre reinforced concrete originally developed for marine uses, which produces beautiful castings. The weight of the stair is taken by a central latticework newel tube in polished stainless steel. Curving balustrades in laminated glass have mirrors at the top and bottom of the shaft, making the stair seem endless.

Now in full use with only the odd bit of snagging to sort, it feels effortless, and somehow in the spirit of the building. It is a ­testament to the regard in which Jiricna is held that this intervention – requiring some radical surgery in a grade I listed building – overcame not only the very real technical problems and inevitable design rethinks but also the hurdles of conservation and planning consultation with relative ease.  As ­client, Gwyn Miles has departed on a high.