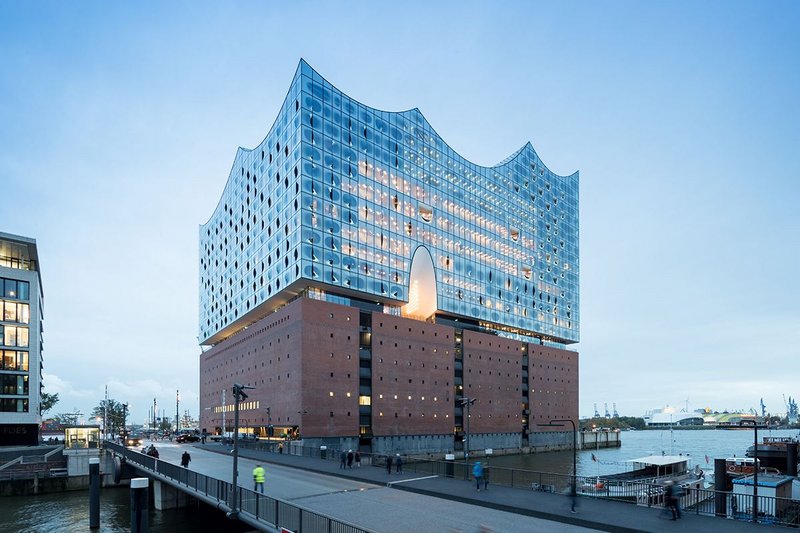 Sandwiched between a luxury hotel and apartments, the Elbphilharmonie is denoted by the presence of two arched forms, part of the plaza lobby. Credit: Iwan Baan

If Hamburg residents are still wondering how they came to stump up €789 million in taxes to pay for Herzog & de Meuron’s (H&dM) staggeringly delayed Elbphilharmonie, they might put it down to their past as a maritime free city state and a continuing sense of Hanseatic independence. At least, that seems to be the story from Elbphilharmonie spokesman Tom Schulz, who actually hails from Berlin. I’d assumed the comment was piqued with schadenfreude, but it turns out that his head and heart are very much in Hamburg. Unlike Berlin, Hamburg receives no federal handouts to guard the nation’s cultural assets. ‘It might be Europe’s biggest non-capital city but we’ve never received their kind of state funding,’ Schulz reveals. ‘But Hamburg has a long history as a proud merchant city; with a cultural life funded through taxes and philanthropy. In fact, the mayor would never have dreamed of going to the federal government for the money for its concert hall.’

Then again, I don’t think they’d have got it even if they’d asked, as the €866 million building was the result of both this ‘city-state’ attitude and unconventional procurement. The idea for a concert hall was that of Hamburg power couple, architect Alexander Gérard and art historian Jana Marko; who 15 years ago spotted the cultural and commercial potential of the rundown 1960s Kaispeicher A brick warehouse, at the prominent western end of the central harbour regeneration area. Gérard had gone direct to his old mates H&dM for inspiration, to be presented with the napkin sketch of a wave-like glass concert hall aloft on its massive brick plinth. This sketch proved so persuasive to Hamburg’s Senate that it not only paid off Gérard for his idea but canned a competition win for an office tower on the site. To all intents and purposes the cultural project was a private commission, outside the normal public procurement processes, which left it free to put H&dM at the helm, buoyed up with €272 million of city money.

And the rest, as they say, is history. Seven years late, and after a three-way legal wrangle between the city, contractor Hochtief and the architect due to contractual issues, causing a two year cessation of works and a final reckoning that came in at more than triple its 2007 budget, Elbphilharmonie’s trapezoidal, crystalline form rises incredibly, 110m above the river. Its sheer mass and size seem to have shifted the centroid of the city, making this unlikely post-industrial site the point around which Hamburg’s plan now seems to revolve.

At least, that’s how it appears from a distance, looking from the tower of the 16th century St Michaelis, a symbol of Hamburg and one of the six city steeples still dominating the northern skyline. But their urban dominance is retained, augmented even; Elbphilharmonie’s height defers only to other civic buildings: church spires, the 1968 TV tower and City Hall. These aside, it’s an unprepossessing cityscape that belies its financial wealth; the mercantile and residential north shore facing out across to the sprawling heavy industry of the port district to the south, second only in trade volume to Rotterdam. It’s a culture and industry face-off; the contrast is palpable.

But Gérard was right all along – Elbphilharmonie’s siting is pivotal; sitting on the Grasbrook peninsula that divides these two worlds reflected in the Elbe. It’s an eyrie to the city’s life, breadth and commercial power, where from its plaza level you can take in the urban panorama. Schulz is proud of the view’s industrial look and lack of ostentatious display; a throwback, he argues, to the notion of ‘Hanseatic understatement’ that governed the mores of its mercantile classes in the past. 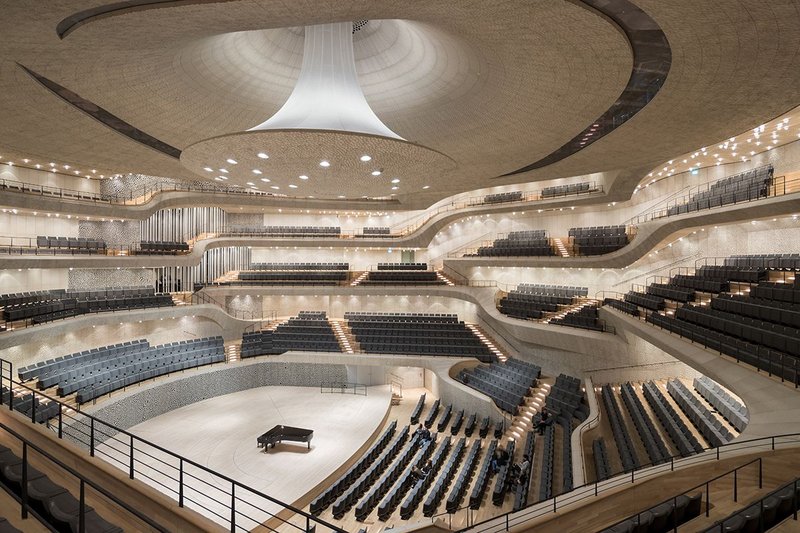 With its interconnecting levels and 10,000 coral-like acoustic panels and organ, centre right, the 2,100 seat main hall is highly impressive, despite its restraint. Credit: Iwan Baan

So if from St Michaelis, the Elbphilharmonie’s lovely panels of screen printed, iridescent and sometimes billowing glass might be mistaken for just a glamorous office or residential building, that too would reflect the city’s aura of understatement and pragmatism. It would account for why the concert hall was always meant to be cosseted by a luxury hotel to the east with high-end apartments to the west with their unobstructed river views; and below, behind solid brick walls, by a multi-storey car park. Given that the civic expression of the hall itself is so encased, it falls to the external ramparts and quasi-internal ante-lobby to the auditoria above the Kaispeicher A’s roof – accessed by a slow, tantalising ascent on a sexy curved escalator via a long white tunnel, bypassing all this other stuff – to create the theatrical arrival one expects of a concert hall.

It’s another world here past the grand west-facing brick picture window. Raised 37m above harbour level, it feels the Baltic’s winter air whistle through gaps between the tall curved glass panels separating lobby from plaza. Materials are few, simple and robust; glass, plaster, oak, brick. But the section is complex; wide brick floors step up from the escalator, the distended belly of halls above swooping down. Linking these, like giant white umbilical cords, run the sculptural volumes of the auditoria staircases. If the architect was paying lip service to the peaked roofline of Hans Scharoun’s  Berlin Philharmoniker, it’s in this grand lobby far below that H&dM puts its expressionist money where its mouth is.

Passing from Lutheran decadence up the wide staircases to the auditorium levels above, the sense of material indulgence is reserved more for the recital hall lobby than the grand hall’s. Schulz claims that H&dM wanted the former ‘to feel like a jazz club or a cigar case’, and with its dark Maduro-coloured oak walls spreading out like fingers and low ceilings soaking up the voices of concert-goers, the space feels so intimate you can almost smell the tobacco on its breath. This sultry feel lingers within the box-form recital room, itself made of angled walls of sensory and highly tactile coupes of French oak, as if Marie Antoinette rather than noted acoustician Yasuhisa Toyota had modelled them.

The haptic qualities of the auditoria are really what define Elbphilharmonie as an entity. The main hall’s vineyard form and its materials might be Toyota’s concept and specification, but the final arrangement and execution seems very much that of the architect. Rising internally over 30m past the huge funnel-shaped acoustic baffle, those 10,000 unique acoustic panels lining the hall conjure polarised associations that range from diaphanous to dead-weight. In one view it can appear massive, of hewn and scabbled concrete; yet simultaneously as delicate and brittle as coral. And overriding all is the organic geometry that has the varying levels meld one into another, a subtle spatial democratisation running all the way from the stalls to the gods; satisfyingly Teutonic, modern and civic. The hall’s impressive organ at first is lost in the composition. Like geological striations that have drip-formed down its sides, its function too reveals itself gradually to the observer.

It’s perhaps only in the main hall’s circulation areas that the commercial trade-off becomes most apparent. With hotel and apartments book-ending the main hall, access lobbies are piled one on top of the other in vertiginous succession. So where Scharoun could indulge concert-goers to luxuriate across the low stepped rise of his public areas, here narrow and curiously stark lobby spaces are concertinaed together by a mass of Escher-like staircases to the point that from the plaza it feels like scaling Jacob’s Ladder. It results in visual drama, but with bars on every level, the critical mass required to produce a palpable buzz of anticipation was dissipated across the section. It was also preceded by a ‘starter’s orders’ dash up the stairs from the plaza after being corralled there waiting for those leaving an earlier performance. This could be due to the intense programming of the venue, but in reality the heavenly ascent to the plaza level was replaced by a purgatorial bottleneck on leaving. Schulz concedes it’s a nuisance; with both escalators sometimes having to run one way to deal with the crowds. User experience thus becomes defined by not only the time it takes to enter the hall but the manner of leaving. The architect’s justification for a protracted grand entrance feels more like a sophistry on exiting. Post Gershwin, I excused myself early from German pop sensation Tim Bendzko’s bubbly second-half turn for a slow escalator ride down, just to avoid the final kettling.

Perhaps it’s all just part of the Hanseatic spirit in which Hamburg conducts itself, but passing down through the lobbies of light oak, white polished plaster and fluorescent strips, the tasteful restraint seemed too much, too minimal. Schulz insisted I visit the infamous Reeperbahn in St Pauli district before I leave; the city’s neon-soaked, booze-fuelled, sleazy underbelly, unequivocally reminding visitors that Germany’s second city is first and foremost a port. Close by and despite the freezing mist, it was a riot of neon, shocking and buzzing with energy. Elbphilharmonie might be a product of its place but raised aloft on its plinth, it exemplifies restraint without that hedonistic alter-ego. Whether the world’s concert-goers and weekenders respond to this sensibility as much as local residents do remains to be seen, but I sense they don’t care anyway. ‘Elphie’s’  head, if less than passionate heart, remains very much of Hamburg.