On plan the Eldon Building looks long and thin. From the entrance it looks tall and interesting. Both are true.

The University of Portsmouth’s creative arts faculty has been brought together as its own mini campus by the gathering of a 1960s art school, a deep plan 80s array of workshops and studios, some odds and sods and a new building that makes sense of the courtyard at the heart of it. This building, by Penoyre & Prasad, holds together the courtyard and starts to make a real street of the little Middle Street where students gather at the incised base. Nor is the building too deferential to front up to Winston Churchill Avenue, the dual carriageway that cuts through the centre of this city, edged by oversized bomb site fill-ins from the 1980s and 90s.

The building is just 12m at its narrowest, broadening out where the café and first floor lecture theatre push it into the courtyard. Along the eastern edge of the building runs the circulation, kinking reasonably along the four-storey atrium that draws you into the studios above. Here students sit working and talking. Studios and a few offices run the length of the building, a single fire compartment thanks to borrowing the staircases of the buildings it touches at either end. It is a linking and finishing building, a portal to the courtyard and faculty which surround it.

The school of architecture moved here from the Portland Building, designed by Professor Sir Colin Stansfield-Smith – an important figure both here and in Hampshire as a county for establishing a very humane, low-key and light filled design language for its schools. The school might have outgrown the Portland, and longed for more forthcoming relationships with its neighbours (then engineers) but the airy timbered spaces are mourned by staff and students. Ian Goodfellow, partner at Penoyre & Prasad, deliberately brought some of these features into Eldon. The new building is less extraordinary than the Portland but has some dramatic moments, its warmth noticeable in the smaller details. The timber slatted soffits and light atrium, and the possibility of natural light in the lecture theatre, soften the building. Walking around with Goodfellow, I see him greeted warmly by tutors. Nicola Crowson senior lecturer, teaching a studio, puts her finger on the difference between the two buildings: The Portland defined the students’ work, in its grid and materiality, this one opens up possibilities with freer studio spaces.

The practice itself has a good record in humane buildings that work with people, having completed a notable stream of schools over the last decade. The window at the end of a corridor, elevated floor-to-ceiling heights as on the top floor here, desks and plug in points along the edges of the slim atrium, are all popular and well used. It is not surprising, this is an uplifting and beautiful space. The practice also has a pragmatic approach to inexpensive buildings and design and build that has produced some good results.

But here the process faltered, particularly when it came to the Corten wrapping the base of the main stair. This was abused before it was even installed and faced further ignominy as it was it was fixed with rows of protruding screws and coated with a plastic sheen. Junctions and finishes struggle to match the quality of the space and the suspended timber ceiling over the café fails to provide the intended notional sense of enclosure. Then there are user changes: a section on the ground floor has been turned into a Richard and Judy style open studio for students but clumsy carpeting beyond has an unconvincing living room feel.

This is perhaps a good lesson in design and build, and the life a building takes on, for the architecture students it houses. In fact the school of architecture wasn’t originally intended to be housed here; it was going into a refurbished building next door until the school’s project office costed that (expensive). But it works well, these floor plans are easily and flexibly divided into studios or, at the top, offices. And they put architecture at the heart of the Faculty of Creative & Cultural Industries which the new dean is working hard to connect up meaningfully – the revived courtyard will be essential to bringing them together with fashion, textiles and graphics. The brick and window dimensions may pick up on domestic architecture materiality and rhythms, but they also give this faculty entrance a sense of seriousness that befits its desire to appeal to industry. The corner cutaway and its yellow underside hint at a more playful explorations going on within (just take a look through the picture window). This building shows that, unlike the rash of other arts schools, large floor plates are not essential to creative collisions.

The university has been a driving force behind city redevelopment with an expansion of student numbers and their campuses. For Penoyre & Prasad the university has also been a long term client: starting with its 2007 extension into the park for the ABK-designed library and repeat work on its later configurations, and now a reworking of the city theatre with the university. It is giving Portsmouth some of its more civilised large scale buildings of the last decade, that have a sense of the city as well as the university. Long may it continue. 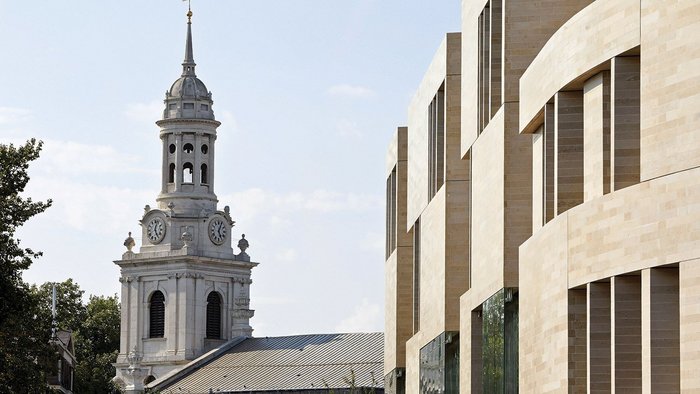 The rough and the smooth 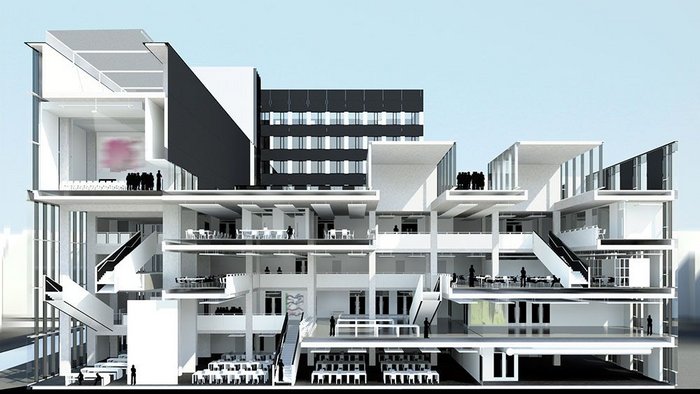 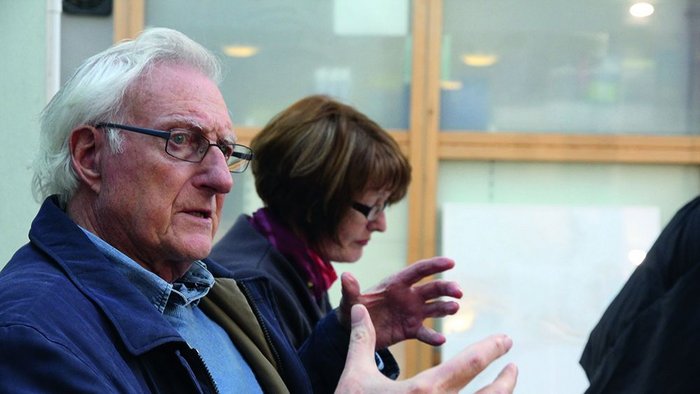