When planning got under way during the Second World War to rebuild London, better transport links were seen as vital. One of these – an early stab at a new cross-London deep tunnel railway system to take full-size trains – appeared in the 1943 County of London Plan. It has taken nearly 80 years to achieve a much-changed version of that proposal, namely the section of the Elizabeth Line running from Paddington in the west to Abbey Wood in the east, complemented by the patched-together Thameslink system running north-south. These are our equivalents of Paris’ RER express network.

This key section has 10 new stations: eight below ground and two above. The other branches heading west to Heathrow and Reading, and east to Shenfield in Essex, are surface lines that make use of existing tracks and upgraded stations.

The design ethos for the below-ground examples differs from the last substantial new underground line in London, the much smaller scale Jubilee Line extension. On that, individual architects designed each station from platform to pavement. On the Elizabeth Line, duties are shared. At train level the aesthetic is determined by a common set of components, from platform-edge screens and the dimpled tunnel linings to the lighting and signage: the key architect for that is Grimshaw.

Individual architects take over at the surface, providing local difference. Where the two jurisdictions overlap (typically starting at the bottom of the first escalator hall) collaboration takes place between the respective teams to effect the transition. 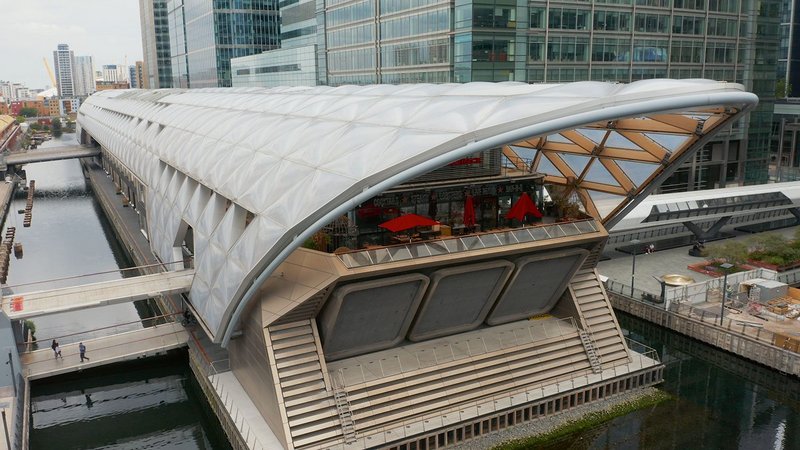 Only one architect designed more than one of the stations on this stretch: Weston Williamson, author of both Paddington and Woolwich. The others are McAslan for Bond Street, Hawkins\Brown for Tottenham Court Road, Aedas for Farringdon, Wilkinson Eyre for Liverpool Street, BDP for Whitechapel, and Tony Meadows/Adamson Associates for Canary Wharf. The two above-ground examples are Custom House by Allies and Morrison, and Abbey Wood by Fereday Pollard. Supervising them all was Crossrail’s head of architecture with his own team, Julian Robinson

The architects worked as part of a civil engineering-led project. Three of the below-ground stations are within full-length excavated boxes – Paddington, Canary Wharf and Woolwich – while the others are ‘mined’ beneath the existing cityscape, with smaller boxes at the ends for escalators, lifts, service machinery and vent shafts. The mined stations take advantage of the ‘New Austrian’ tunnelling method using sprayed concrete rather than bolt-together ring segments. This allows more fluid junctions between platforms and cross-passages compared with conventional tube lines, with trumpet-mouth splays rather than abrupt rightangles. Finally, the 245m length of the platforms means that in the central section each station is effectively two, one at each end.

Down into Liverpool Street

Wilkinson Eyre became involved with Crossrail at Liverpool Street in the mid 1990s for the preceding cancelled version of the line, and stayed on board for the simplified railway, approved in 2008, that we see today.  This is the deepest of the new stations, built in very challenging conditions. Apart from the existing Underground lines (Central and Metropolitan/Circle at the eastern end, Northern and the Great Northern Railway subterranean terminus at the Moorgate end) there is also the inactive but preserved Post Office tube line snaking through. And this being the City of London, there was a maze of underground services, from data and power cables to water mains and sewers, which needed to be relocated.

Moreover there was a lot of archaeology to descend through, and painstakingly record, at the eastern end by Liverpool Street station and Broadgate, including the Bedlam burial ground dating back to the 16th century with a ‘plague pit’ mass burial.

With large City buildings all round (including those of Broadgate, itself being enlarged at the time) and the existing busy commuter stations at either end continuing in full use throughout, getting the station tunnelling done meant requisitioning Finsbury Circus, which sits half-way along the station’s length. Here a large working shaft was sunk, and the station’s lower concourse and platform tunnels mined east and west from the bottom of it. As Wilkinson Eyre’s director Bosco Lam relates, the presence of this shaft prompted them to suggest putting an oculus in the Circus – imagine being able to look up from 34m below ground and see the sky far above, as if from the bottom of a well. But this was an expense too far so once the works were finished, the shaft was filled in.

As a place to move through, this station is exactly the opposite of its sister at Paddington with its cathedral-scale spaces. Here, the ground level and immediately sub-surface areas have to be relatively small, with most happening at the western, Moorgate, end. There a new concourse is made at the foot of an ‘over-site’ building – 21 Moorfields, also by Wilkinson Eyre, just being finished. The externally-expressed trusses of its facade carry its load across the broad entrance with its splayed blue reveals, minimising the columns in the concourse inside.

The first thing you notice is the facetted ceiling. Headroom was limited but a flat soffit could have been oppressive, so the solution is a shallow zig-zag sequence of triangulated ribbed precast concrete panels cast into the slab above, their main ingredient of Portland cement given a slight sparkle with mica flakes in the mix.

This soffit sets up a sense of movement, helped by the fact that nothing is mounted on these panels to interrupt the rhythm. The play of light and shade gives the impression that they are softly striped. This upper concourse also connects through to the existing Moorgate Station lines.

The great luxury of the line is space, generated by the trains’ size and capacity

The zig-zag theme continues in the cladding of the flank walls of the escalator hall – in this case done graphically and two-dimensionally but for the same reason of avoiding large expanses of unrelieved wall. At the foot of the bank of escalators comes a slightly uneasy junction between the linear geometry of the Wilkinson Eyre surface finishes and the softer, more curvaceously organic Grimshaw underworld with its dimpled and perforated passageway linings: here the trumpet-mouth entrance is pulled upwards to soften the transition but it’s still a bit of a clash.

Down below, this is the only one of the deep stations to have a full-length central concourse between the platforms to either side, down which marches a long sequence of the freestanding ‘totems’ which carry all the equipment from signage to tannoys; in cramped old-style tube lines these tend to hang off the ceiling. The great luxury of the Elizabeth Line is space, generated by the size of the mainline trains and their passenger capacity. One of the successes is the indirect lighting strategy: for instance along the top of the platform edge screens is a full-length illuminated band which washes light down the curving rear wall without dazzle.

At the eastern, Liverpool Street, end the design sequence is the same, with three differences: the passageways curve this way and that to dodge other tunnels, funicular lifts accompany the escalators, and finally you emerge into Broadgate via a glass-box entrance supported by a concertina arrangement of portal stainless steel beams.  Or just walk straight through into the lower concourse of the mainline station. All in all, this is quart-in-a-pint-pot stuff, an enormous subterranean station inserted into a physically congested area.  There are showier stations on the line: this one is an exercise in refined understatement. 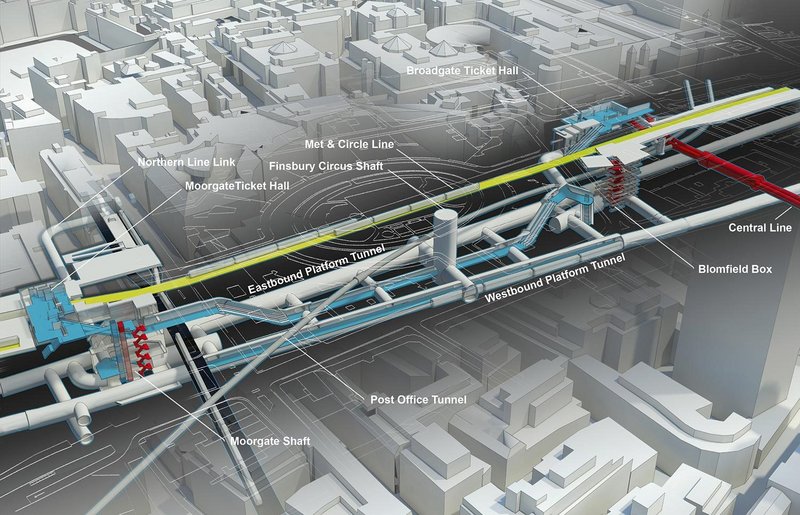 Underworld complexity – how the station threads itself through. Credit: Wilkinson Eyre