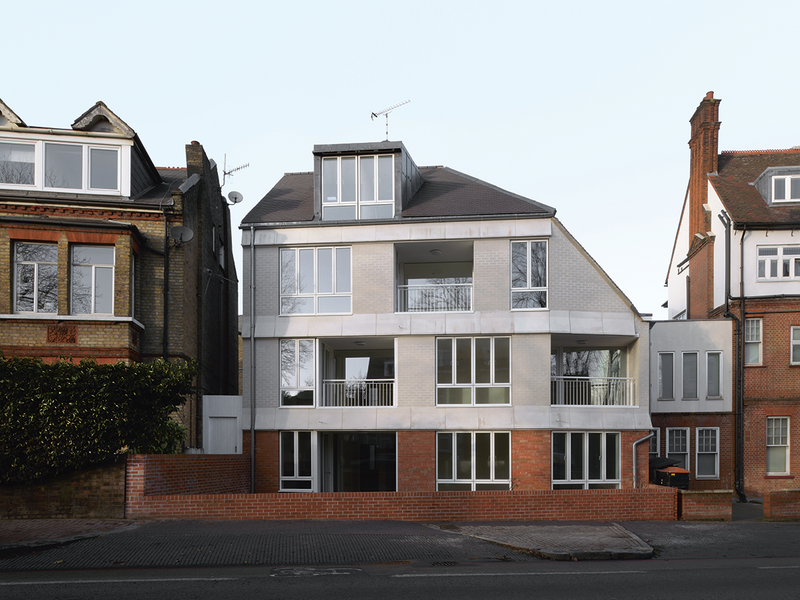 Drive into London on the A3 and just after Roehampton the six-lane highway narrows abruptly to two. Traffic crawls nose-to-tail before coming to a stop at the junction with the South Circular in a cloud of exhaust fumes. Glance to your left and you might notice Suffolk Hall, a large Edwardian apartment building and, adjoining it, a new block of flats. Its faceted facade of red and white brick and steeply pitched roof are recognisable as contemporary interpretations of its neighbour’s character. Perhaps the building’s form might also betrayhints of a struggle to overcome the constraints of the site. What is not so apparent, from the driver’s seat, is that the main problem this building has to solve is you.

The block replaces a drive-through carwash on a deep, narrow site that runs between West Hill (the A3) and the equally car-clogged Upper Richmond Road – the A205 – to the north. It was designed by Emily Greeves and Bernd Schmutz, former colleagues at Caruso St John Architects who now have their own practices – she in London, he in Berlin. ‘We tried several very different housing types to see how eight or nine flats could be organised in a way that deals with traffic noise,’ says Schmutz. ‘In the end we chose a plan with a simple logic, and organised the building as two wings wrapped around three sides of a central courtyard.’

Next, the architects manipulated the building’s form in response to neighbours on either side. Dual-pitched roofs to both wings fall to the centre of the plot. On the west side these are gabled to mirror those of adjacent houses. To the east the hipped roof leans away from Suffolk Hall both as a deliberate show of deference and to observe rights to light. There the eaves height drops by a storey so that the third and fourth floors are wholly within the roof volume. ‘We found the idea of a big roof visually interesting,’ says Greeves, ‘but it was also the most efficient way of organising the site – a spatial necessity.’

The design of the street facades was not motivated by a duty to be contextual, says Greeves. ‘We were more interested in the potential of older architectural idioms to be springs for new ideas.’ Above a red brick ground floor, the upper storeys are faced in creamy masonry and articulated by deep bands of pale precast concrete. These sloping sills lend a calming discipline to the elevations. ‘The scheme works hard to fit in a lot of different flat types – there’s very little slack,’ says Greeves. ‘Adding horizontal emphasis was important in uniting the composition.’

From a gated entrance on the Upper Richmond Road, a long passageway leads to the central courtyard. Largely hidden from the street, this light and lively patio is something of a revelation. At only 65m2 it has the feel of an outdoor room: protective and intimate. It is surprisingly tranquil, given the close presence of the road, and with planted beds around the edge and a bench in the centre makes a pleasant place to pass the time. ‘We thought of the courtyard like a green foyer to the flats,’ says Schmutz. ‘It’s a gentler, more dignified way to enter than a door on the street.’

Materially the facades are in deliberate contrast to the outside. A cladding of overlapping off-white fibre-cement panels makes a nod to the white glazed brick lightwells of earlier London housing. It was also influenced by Greeves’ longstanding interest in Neylan & Ungless’s Setchell Estate in Bermondsey, where two-storey houses are arranged around tiny courtyards clad in a pinkish profiled metal. ‘We wanted to give our courtyard an interior quality,’ says Schmutz, ‘so a thin lining material, almost like a fabric, is used to suggest a certain delicacy.’

At just 8m, the window-to-window distance between flats is barely a third of what is usually required. Fortunately Wandsworth’s planners were open to the argument that privacy can be provided in different ways. Greeves and Schmutz wanted to avoid angled windows that would compromise direct views on to the courtyard, and instead hit on the idea of dividing each window into three panes: one of clear glass, one obscured, and the third with a one-way mirror coating. It’s pretty effective, with the additional benefit of a kaleidoscopic play of reflections that enlivens the space.

All eight flats are accessed via two open staircases in the north and south wings. They range in size from 50 to 133m2 and, due to the variety of sizes and irregularity of the plan, each is unique. ‘One of the fundamental considerations was how to make comfortable housing in that very challenging situation,’ says Greeves. ‘We felt we had to give each of the flats a proper aspect to the courtyard as an escape from the street.’

The desire to create a feeling of shelter also informed the design of the inset private terraces enjoyed by all but one of the flats. Glazed patios that project into the living area also bring daylight deep into the flats, and divide open-plan spaces into groups of loosely interconnected rooms. ‘Some flats are quite compact but we have tried hard to make plans that feel generous,’ says Schmutz. ‘The internal terraces make each adjacent space feel larger.’

Characterful spaces produced by the geometry of the roofs also contribute to the quality of the flats, as do courtyard views, though these are not everything the architects had hoped. To improve privacy and provide a focal point, Greeves and Schmutz proposed a cluster of mature silver birches in the centre of the space, but the contractor has substituted a skinny sapling.

Trees do grow, of course, but other deviations from the designers’ intent can’t be so easily remedied. Anticipating that the architects would not be novated, Schmutz produced a full technical description for the tender package. Even so, the catalogue of construction errors runs from lowered ceiling heights and misaligned eaves to damaged finishes.

With so much creative energy invested in the project, the architects’ deep disappointment is understandable, but I left the building feeling buoyed by its powerful demonstration of the way that architectural ingenuity can unlock challenging sites. The latest London Plan substantially reduces the target for developing small sites, in part because they are so difficult, but it is hard to see how the required number of new homes can be provided otherwise. We will need much more of the intelligence and sensitivity shown by Greeves and Schmutz at West Hill.