In docking a cut glass airship at the Port of Antwerp, Zaha Hadid Architects transports a historic building into the future 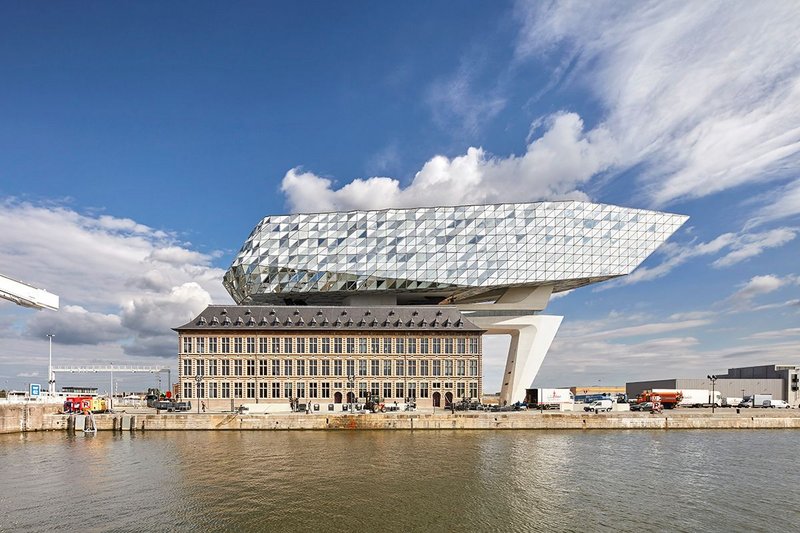 In a way, criticism is futile when assessing the buildings of the late Zaha Hadid and her practice. Normal parameters do not apply because we are not in a world of normality. Or rather, you are in the world of ‘Zaha normal’ where a seemingly outrageous building has its own internal logic, followed through with utter conviction. That was how she did things. She had got to a point where she had licence. You might as well accuse a poet of not being a news reporter.

Besides, at her New Port House in the Antwerp Docks, one must remember the great Belgian tradition of surrealism. Magritte, Delvaux and friends may have been less showy than their French and Spanish counterparts but were fully signed up to the business of shocking or revealing juxtaposition. What could be more surreal than splicing a glittering sculptured airship into a foursquare, bourgeous-competent piece of historicism – a fine listed 1911 copy of a long-lost Hanseatic palace – that was originally a very large fire station from the office of then city architect Alexis Van Mechelen?

It’s easy enough to see the main case against this, namely: why graft a new building on top of a nice old one when there is all that docklands space round about? This is in the enormous area of the Port of Antwerp, the second-largest in Europe. The brief was to provide a new HQ for the scattered port authority itself, the fire service having moved out. The port authority wanted to restore and re-use what had become a battered old building and acknowledged its historic merit, but also acknowledged that it did not provide enough floorspace and so would need to be expanded. Moreover this is an island building, with four facades of equal status. There is no subservient rear elevation to attach to. So, in the competition, several of the entrants opted to extend upwards – as did Zaha. But she also went outwards, pointing her glittership south towards the River Scheldt, the centre of the city and its cathedral tower.

You are in a Low Countries landscape of sky and sea. The docks area is vast but you have to get up a bit higher in order to appreciate that vastness. The Port Authority entertains trade delegations from all over the world: it wanted to demonstrate its domain with one sweep of the hand. It also, of course, wanted an image of modernity and innovation. This resulting building is certainly big. The new part is 111m long by 24m wide by 21m high, perched above the original courtyard building of 78.5m by 63m by 21.5m high. Its angled bow cantilevers quite a way to the south, its rounder stern – another massive cantilever – just stays within the curtilage of its host body to the north. But big though it is, in this context it does not dominate. There are no buildings close by. It is an incident in an extraordinary aqueous landscape loosely scattered with very large objects of various kinds.

The new building is set slightly to one side relative to the courtyard below, rather than being on axis: this is to allow better daylighting. It stands free of the old building, descending to the ground via two cores – the main one in the now-glazed courtyard, the secondary one (containing stairs only) in its angled freestanding prow. These cores are connected above ground via the partly-open concrete bridge deck between old and new and invisibly below ground, so making an enormous vertical ring beam. The perched steel-framed structure is then braced by Cyclopean angled columns in black-painted steel shooting up from the courtyard. This used to contain a clutter of various outbuildings relating to the fire service, and is now a reception and exhibition area. On its eastern side, where the fire engines used to sit in their garages, there is now a public reading room with access to the port’s archives.

Your journey up into Zaha World takes you via panoramic lifts in the stumpy tower that used to be where they hung the fire hoses to dry. There is a brief flash of daylight as you shoot through what was once the roof of that tower (the original architect envisaged a much taller and more ornate campanile, never built) through the airgap between the two buildings and up into the belly of the ship.

Up there the bridge-like steel construction becomes fully apparent. It is an arrangement of three longitudinal trusses plus cross-trusses, all delivered in large pre-assembled sections by barge and hoisted into position by crane. This accounts for the top three floors, while the lowest floor of this part is suspended on hangers. From that you can descend via stairs to the in-situ concrete open deck – or airship gondola, if you prefer. This fits David Chipperfield’s definition of the best architecture being made of things that don’t appear in the brief. Nobody asked for this sky-platform or elevated agora between the triangulated structure of the ship on top and the slate roofs of the building below. It makes a virtue – or maybe fetish – of the structural engineering that holds everything together, and has a commendably smooth finish . Partly sheltered from the prevailing wind on one side by glass screens, it culminates in a beak-like prow, gazing north to the city. It’s the kind of place for receptions.

The office floors are as standard as is possible in this kind of structure, where boxed-in girders erupt at angles at intervals and the fit-out people have struggled to get sunblinds round the more awkward corners. It’s an open plan hot-desking office arrangement, with freestanding pods of accommodation for everything from storage to meetings. The notable other spaces are a curtained-off auditorium at the bow end with a bravura approach ramp, a board room at the stern and the staff restaurant. Below, in the restored old building, you get conventional rectangular floorplates and the existing closely-spaced vertical columns but a frequently poorer quality of daylight.

The triangulated glass-and-aluminium cladding runs right round the belly of the superstructure and terminates in a perimeter upstand to conceal rooftop equipment. This cladding – partly inspired by Antwerp’s diamond trade – starts off smooth at the prow and then becomes progressively more crystalline towards the stern. Although fully glazed, many solid panels inside cut down on solar gain. What with this, its waterborne construction delivery sequence and its use of groundwater cooling via chilled beams, it achieved a BREEAM ‘Very Good’ rating.

Zaha and Patrik Schumacher are both credited as lead architects: the extraordinary products of their partnership will continue to emerge in the coming years. Project director Joris Pauwels, himself Belgian, commends an excellent working relationship with local executive architect Bureau Bouwtechniek.

If all you wanted was floorspace, of course you wouldn’t do this. You’d probably build a conventional tower somewhere else. But if your aim was a talking point and a landmark HQ building with more than a dash of symbolism to it, well, there you go. It is a built advertisement for the port. Nobody could exactly call it rational, but then nobody ever called Zaha ordinary. It is a precocious and precious object.