With Spain still enduring painful recession, public budget cuts and a dearth of projects half-built or on hold, it is perhaps with some relief that Mediomundo Architects’ €16m Faculty of Health Sciences has finally opened in the Moorish city of Granada, Spain. Part of a campus masterplan by architect Cruz and Ortiz, the 11000m2 building combines schools of physiotherapy, nursing, podiatry and geriatric care. Nearby, about to open is the University’s General Service Centre followed by the new Faculty of Medicine in 2015.

While looking wilful, the form is, claims the architect, the result of area zoning regulations, allowing up to 10 floors (40m) on the west ‘urban’ side facing the street, but only three floors 130m further east into the body of the campus site. This is not an architecture of epidermis, flesh and bones – the white concrete form is both facade and structure, raw faces expressed internally and externally, driving its monolithic nature.

The length of the sloping site allowed the designers to ‘stretch’ the programme, creating interesting public areas in section. At ground level a long concourse with recessed mezzanine running along the south face connects classrooms with laboratories and hydrotherapy pool areas, lit from above with Corbusian light cannons. Bookending this is a refectory on the lower street side and the expressed concrete auditorium soffit, giving a rough-hewn, formal face to campus. Tucked behind this east elevation, a raw ­concrete stair to the mezzanine lends less ­obvious articulation. Seminar rooms predominate on the tower’s mid-levels, with research labs and academic offices at the top.

The need to house all the medical faculties on the restricted plot led the architect to create a dedicated public space for the building in the form of a walled roof garden, whose elemental nature seems to reference Le Corbusier’s Unite d’Habitation – though one hopes it will be better used. Granada’s cooler clime should make summer exposure here less challenging than that experienced in the height of summer in Marseilles. Intended to be planted with indigenous and medical plants, this rooftop physic garden should benefit from the Sierra Nevada’s purer air, the factor that first attracted the occupying Moors up here from Andalucia’s dusty, baking plains. 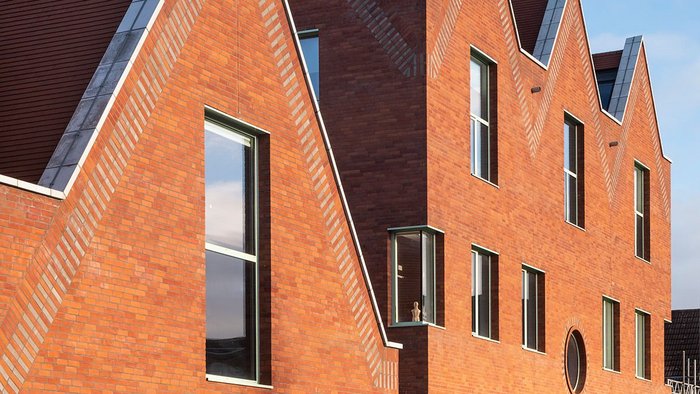