When what was to have been a refurbishment turned into a newbuild, Rural Office for Architecture refined nearby references to make an elegant, natural home

When Ben and Claire Macland bought a 230m², tired inter-war bungalow on a corner plot in the Great Austin Conservation Area, one mile south of Farnham town centre in Surrey, in 2015, they started with the objective of retaining the existing building. The house was a pebbledash ‘Toblerone’, as they nicknamed it – four lined up gable-ended segments joined to another pitched volume across the back. They had bought it ‘rather recklessly’ not knowing what needed to come of it, explains Ben. They had been living in the house and felt that its orientation was well set up. Snapping a few bits off and upgrading its performance should do it. Besides, the couple had renovated properties before but never built from scratch. ‘Building a new house, you are quite exposed. We also liked having a starting point as a reference to change this or that,’ he adds.

That was how the Maclands first engaged architect Niall Maxwell, who they found by trawling awards lists and magazines. His practice Rural Office for Architecture is Wales-based, and most of the material on its website then were drawings and renders (Caring Wood, RIBA House of the Year 2017, was not finished), but the couple liked its Old Barn project in Norfolk and kept coming back to the firm’s work. 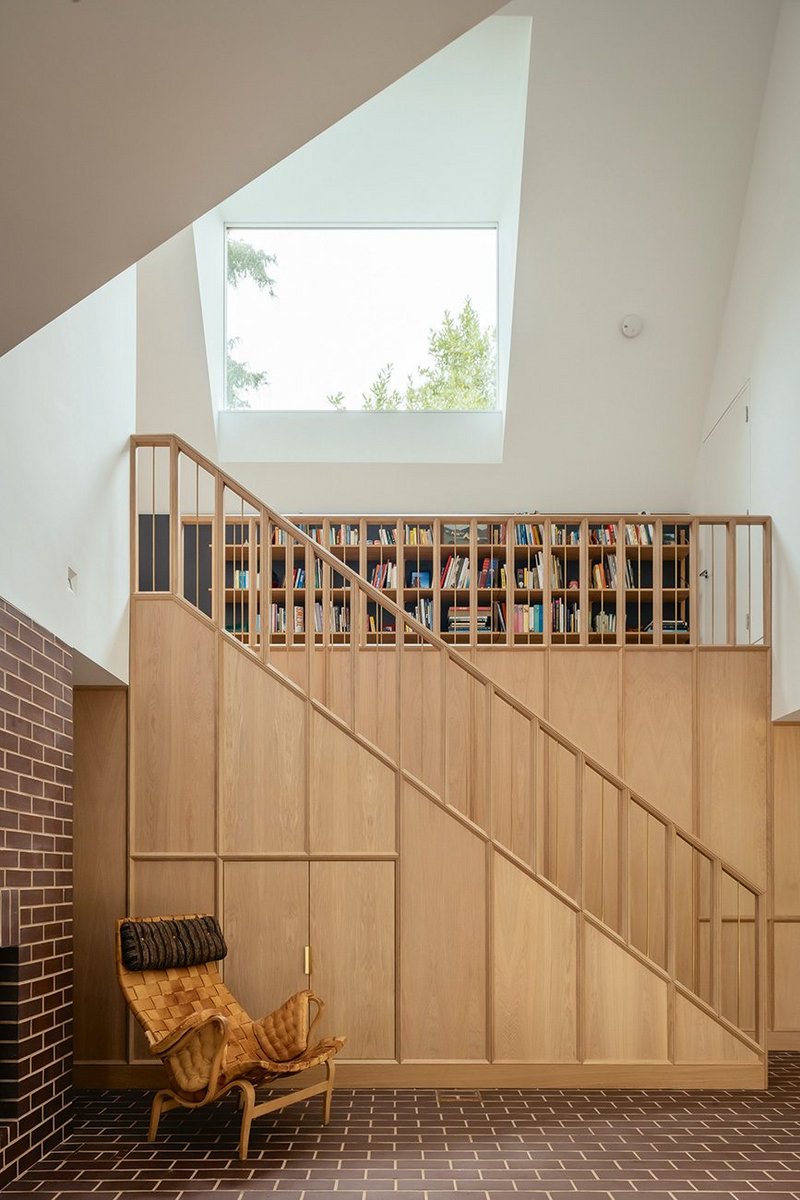 The central hall, the piece of drama in the house that shows its full height internally and continues the joinery of the kitchen in the stair. Credit: Jim Stephenson

As so often happens though, by the time Rural Office had done several feasibility studies, and got a quantity surveyor to cost them, it became evident that to make the existing building high performance they would only be able to save a few walls and it was looking expensive. ‘You go through all that work and end up with a still-compromised building in terms of thermal envelope. It didn’t make a lot of sense,’ says Ben. ‘And then there’s the VAT situation.’ So it was decided to demolish and rebuild. The brief for the new house included that it should be ‘contemporary, but not too boxy or modern… aesthetically beautiful and use the materials found in the best houses locally but a bit sharpened up’. It needed some drama too, because ‘what’s the point otherwise?’, although its visual impact should be understated, not impressive.

An architecture practice based in Wales with the word ‘rural’ in its name and across many of the settings of its work is not perhaps an obvious choice for a built-up area of Surrey where, as Ben points out, ‘you need to build big enough because local houses maximise size’.

However, the site sits at the junction of Swingate Road and Middle Avenue in a small-scale gridded inhomogeneous garden suburb of large superior quality houses that began to be laid out in 1897 and developed gradually. The first house was designed by local architect Harold Falkner in symmetrical Queen Anne revival, with subsequent houses also in more irregular Arts & Crafts styling. Some of the garden suburb ideals have been eroded with a later mix of styles, but the area has a distinctive verdant character with houses mostly set back behind thick laurel hedges. Middle Avenue is bookended by aging brick sentinels, lined additionally with lime trees and traditional style streetlamps. The area fosters the illusion of countryside with a sense of sylvan enclosure and only glimpses of urban and rural distant views.

The main feature of the new house is how it merges with its existing environment. Coming down the street from the station, the house creeps up on you. The laurel bushes encircling the plot make the project all about the 4m-high roof – it’s all you can see. Covered in handmade red clay Keymer tiles, the building forms a natural sequence with the others in the conservation area. You need to double-take to realise it is new and slightly out of the ordinary. The pitch is steeper and taller; its dormers are at more jaunty positions (low for bedrooms, high for bathrooms), and made from patinated zinc with more elegant and slender proportions. These give a contemporary aesthetic, enabled by black painted perimeter frameless windows. The two chimneys are lower, rendered like the walls and capped with powder coated lids to match the zinc.

The house also retains the architectural focus on gables, although simplified from the former series of Toblerone pieces to two set out around a shallow T-shaped plan. One addresses Middle Avenue, the other Swingate Road. This helps create garden areas with different relationships to the sun through the day. The entrance is in a deepened soffit of one wing of the plan at the crux between the two gable ends, making it accessible by foot from Middle Avenue and by car from Swingate Road. At the same time, the roof shape and building’s footprint contort around existing assets, including a corner nibbled off the rear towards the lawn to protect a mature oak tree, which has been adopted as a back exit. These touches make the house a bit more idiosyncratic and tailored to its site. 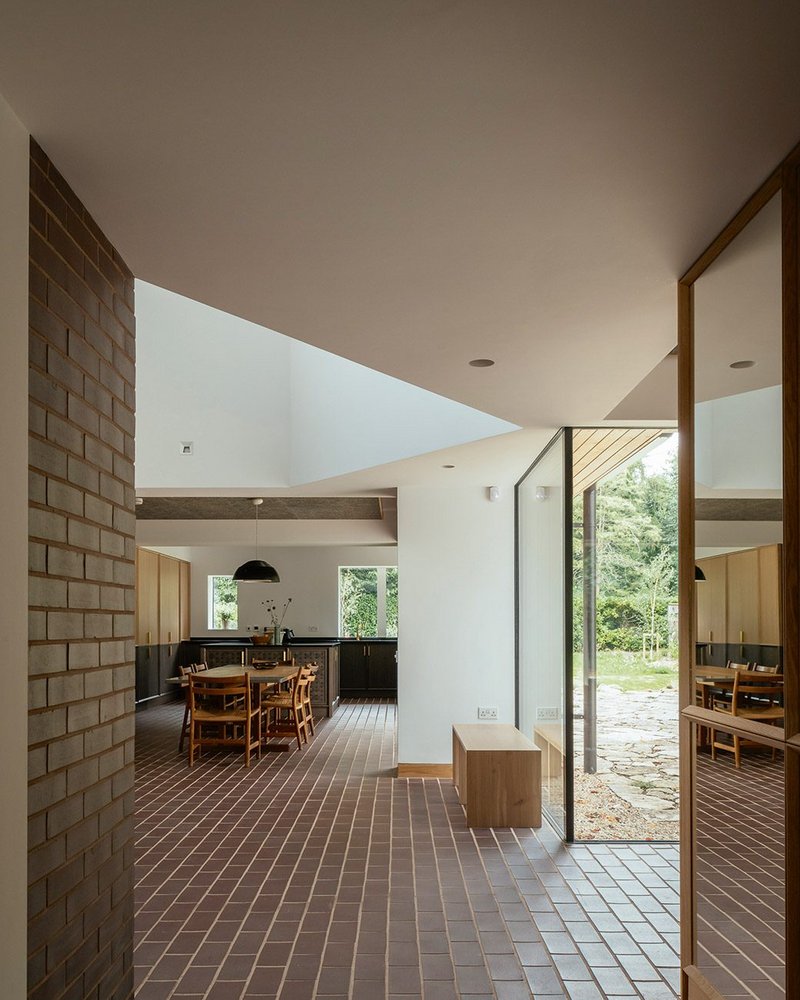 Looking through the house from the entrance – oak, brick, white walls and glass form the materials palette. Credit: Jim Stephenson

The interior, on the other hand, is a series of contingent spaces that mould within this complex roof. The compression from the entranceway externally continues inside briefly, with the garage and WC leading off to the left, and a half length oak partition wall offering privacy to the living room to the right. Then the compression releases into a full building height hall that is more medieval in its usage with the chimney landing on one side and a fireplace opening into the room. There’s a single armchair on a rug in front of it, a long rectangular dining table beyond, with the kitchen at the far end. The space is like a great hall in nature, which has Arts & Crafts notions. The crafted-ness of the interior extends to every detail. A mix of ornamentation in the bespoke beading and woven design elements of the oak kitchen cabinets runs through the oak partitions of the living and utility rooms. The craft is also there in the design of the staircase, alongside minimalism in the furniture choices, often Scandinavian origin, of the client – a Børge Mogensen table and Hans Wegner chairs. Natural materials are everywhere, including the brick pavers on the floor and chimney.

Upstairs, bedrooms are tucked into the 4m-tall roofspaces. The master suite comprises the bedroom and bathroom coming off the dressing room. The bedroom has an almost ecclesiastical quality with a rooflight high in the pitch of the roof. Meanwhile the two adult children’s bedrooms each have their own bathroom. Everywhere on this level there is a Valchromat datum that draws the focus down from the enormous spaciousness above to provide a cosiness. Within the very top of the roofspace in the Swingate Road gable is an office, where Ben and Claire can work.

In all, the house is amazingly fastidious. The bolder moves are considerate to the setting, placing the house in a garden also designed by Rural Office. Every detail has been thought through, carefully drawn and constructed. The house provides a manifesto in how to live this increasingly common contemporary lifestyle that holds dear craft and design using natural materials, and often extends to clothing, food and art. A certain monastic, ascetic quality underpins it all. The house has been chosen by Waverley Council as an exemplar for how to build in this conservation area. As the clients desired, Farnham House is understated, but also impressive and successful. And for the practice the project adds a weightiness provided by historical references to the rural work it was already doing.