With some creative patching and stitching, DVVT’s quirky Ghent boutique refurb steps out in style 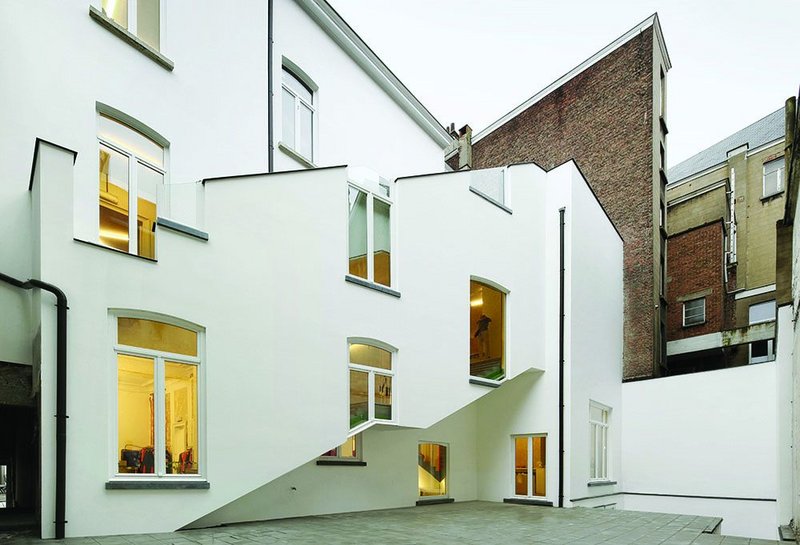 The new staircase facing the rear courtyard of the Twiggy store alludes to the past building on the site by adopting its facade.

A typical ‘concept store’ is formulated, developed and then repeated; with the result that the specific characteristics of its location are of no consequence. The existing interior is merely dismantled and replaced by a concept that doesn’t often respect the identity of its setting.

The Twiggy store in Ghent, with its eccentric new interior and rear extension, is a little different. It isn’t technically a chain store, and the owner personally chooses the clothes he wishes to stock. It occupies a beautiful 19th century building in the city’s historic ­centre, located on the axis from ‘het Zuid’, where Ghent’s South Station used to be. The owner, with a keen interest in architecture, appointed Belgian architect De Vylder Vinck ­Taillieu (DVVT) to connect the three floors with each other to integrate the basement into the whole, converting it to a bona fide retail space.

This has entailed a few major structural moves. In the first room to the left of the entrance hall, it involved removing the ground level wooden floor to create a double height space. The first floor door was cut in half, ­stable-door-like, to become a sort of juliet balcony. Everything else however was kept as is – even two chimney-breasts, one above the other (see below). With the old floor missing, these unchanged walls create a bizarre effect.

From a technical point of view, the renovation wasn’t complicated, although that’s not the impression that greets the visitor. It was decided to keep the existing wooden staircase but the fire strategy required the construction of an alternative at the rear of the building, necessitating the demolition of an extension. The sectional view of this new internal staircase, which runs from ground to first floor, afforded a wide range of possibilities. Cast in concrete, its landings allowed the architect to anchor it back to the existing brick structure at only three points.

On the roof of this addition, another, outdoor, staircase was installed, allowing access to the second floor of the building via a spiral stair from ground level, and reaching a private apartment. The spiral staircase, indicated on the drawings, is not yet installed but is reached from the street by a small passage through the right side of the building. To reduce weight on the existing structure of this new rear facade, the architect chose a light timber construction that was rendered afterwards.

The unexpected formal element that the architects introduced was not to choose something new for this addition. Instead, the old measurements and placement of the rear side windows were copied and then ‘projected’ on to the new rear side facade. Even the same window type was sourced and copied. As a result, the only window that doesn’t undergo formal ‘surgery’ is the one allowing daylight into the existing staircase. One might say it is a ‘folded’ facade, emulating the exact same facade composition. The architect says it didn’t feel the need to make the new explicit or forget the old – and this ambiguity is picked up in even the smallest details.

In the interior, mirrors are used very creatively. The nine fitting rooms, made of plate glass, were placed in the corners, completely transforming the room and creating connections with other spaces in the building. This combination of fitting rooms and mirrors was originally found at Norman Foster’s Katharine Hamnett store in London, where he applied the same technique to create a sense of ‘displacement’. DVVT also chose to work with mirrors in the new stairwell, making a duplication of stairs not only figurative but also literal. With the staircase’s trapezium shaped form, the mirrors provide unexpected diagonal views. This gives customers a sense of fluidity and spaciousness without the need to demolish any walls.

New door frames are accented in bright red. In 19th century houses, built-in closets were often placed next to the high door frames, accessible from both sides; DVVT has also indicated these in red.

One may see the store as ‘unfinished’ or even a work in progress. The high room might make you think of compositions by Belgian surrealist painter René Magritte. But there is also some affinity with the work of Frank Gehry – in particular his additions to his own house, where he was able to let the materials speak for themselves. This is foremost in the design strategy of DVVT and seen in the firm’s other projects. The ­architect kept its distance from perfectly decorated objects, avoiding a polished interior with a minimalistic finishing touch. For DVVT it is much more about searching for ‘regular construction’ through the adaptation of an existing context, with elements already present being embraced and used as part of the  transformation. These ideas are very present in the Twiggy store. It might even be considered it a surgical intervention: not only is the design present during the renovation, but the building itself is too. ­Original plasterwork was kept, while other parts were given a light touch. New electrical tubes are placed over older copper ones – all these decisions create a strange graphic effect.

The aesthetic ideal of the ‘raw culture’ has gained importance since David Chipperfield’s Neues Museum in Berlin. This ideal, where the dimensions of time and disintegration are accepted and implemented, could be considered as a ‘third road’ – one ­between the typical restoration and a showing explicitly of the new input compared with the old. The architects of DVVT are not obsessed with counter pointing new and old as a kind of confrontation, a view taken by many ­architects. They underline ambiguity subtly.
DVVT’s design is thus much more than a budget solution – it makes it possible to reveal the different layers of the building. It is even able to introduce ‘surprises’ into the construction. Partner Jo Taillieu has shown that a different approach to renovation is possible, and that it might help to develop a new way of thinking, with its own formal logic. The firm proved this with its modest but remarkable renovation of the Gallery Verzameld Werk, also in Ghent. The result is a building with a visible history, layered with new complex ­aspects. DVVT’s view is that demolishing history is the worst possible approach to any project. That is why the Twiggy shop is a perfect example of a strategy whereby the building is first and foremost a starting point, only to be followed thereafter by more abstract design concepts. 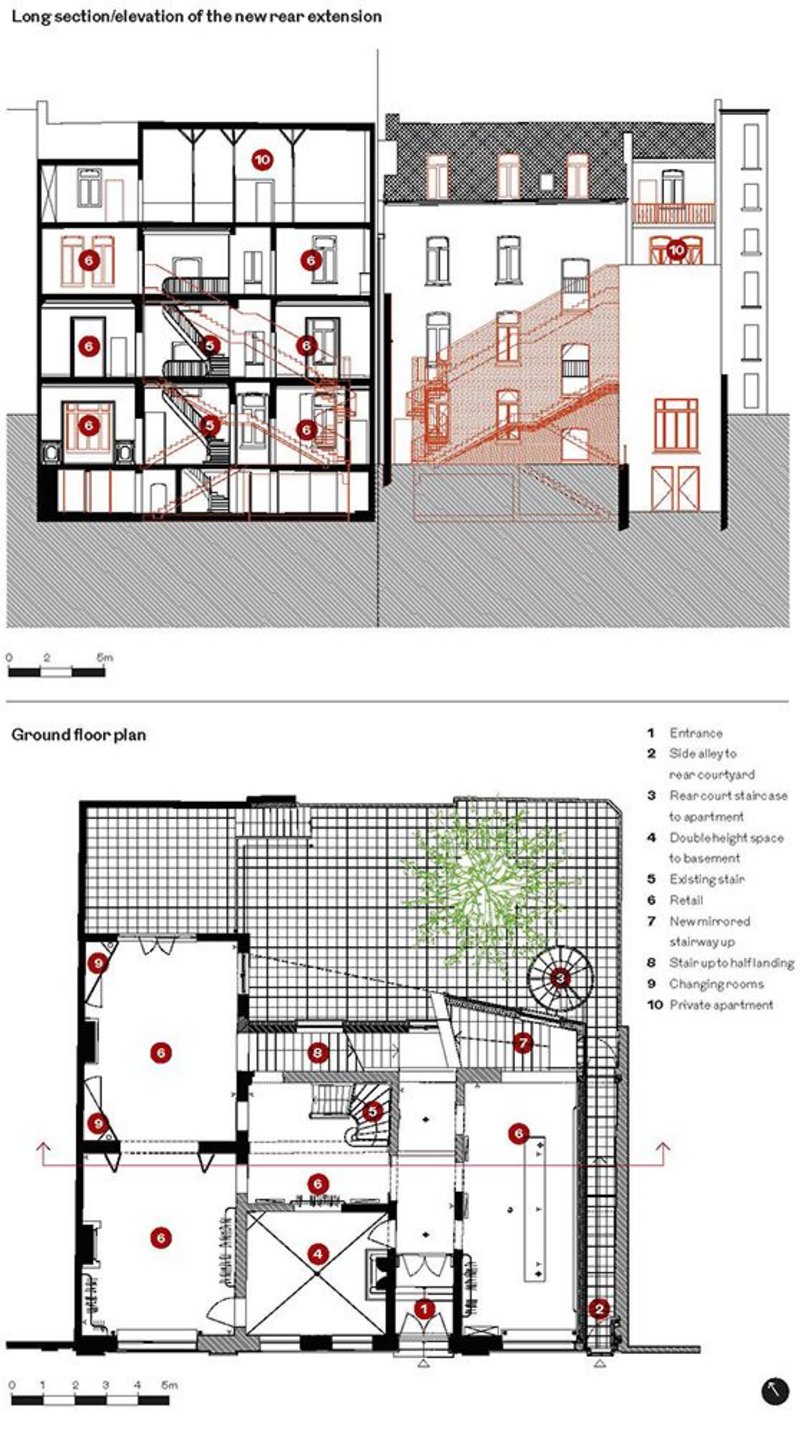