Fitzroy Place, a big new mixed use development, encloses a rare and precious thing in London’s West End – a bit of tranquillity 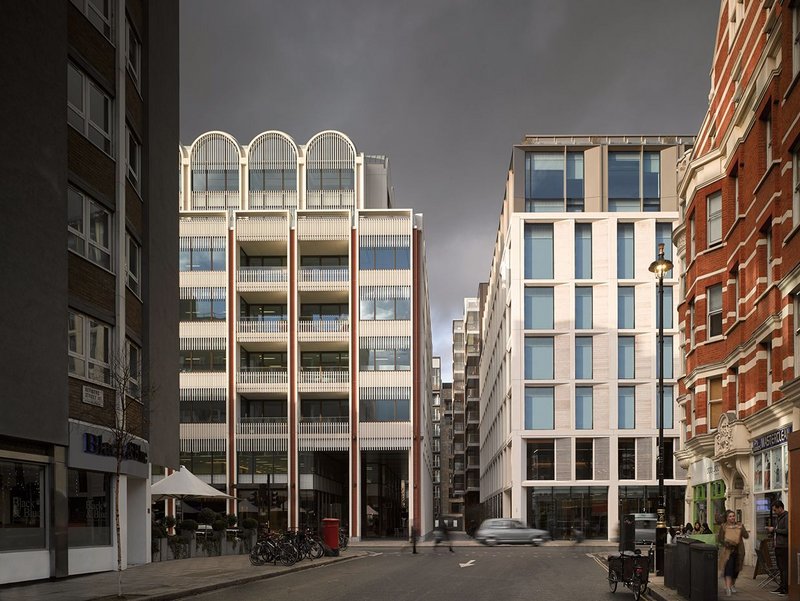 New blocks of city flats are two a penny, but a newly designed ‘place’ is rare. Now there is one in the heart of London’s West End, on a site that was just a big hole for many years. Carpeted in the rubble of the Middlesex Hospital and edged with hoardings, this city-block-sized void boasted the single bloom of an extraordinary little chapel. Styled as Noho by original developer the Candy brothers, it was an ambitious plan, but more than a decade of property deals and a recession later it has opened as Fitzroy Place, a nuanced and calm public space surrounded by housing and offices that demand a second look and with the grade II* listed Fitzrovia Chapel by JL Pearson at its heart.

Its joint authors collaborated closely on planning, massing and articulation, meeting for coffee to work through ideas and support the best of each other’s plans before going in front of the client. I meet Alex Lifschutz of Lifschutz Davidson Sandilands (LDS) and Dan Burr of Sheppard Robson in the deep, airy café on the edge of Fitzroy Place to talk about how they went about making a new piece of the West End.

The design is drawn from the character of the surrounding streets. Lifschutz picked out the interwar buildings and former car showrooms in their characteristic white as the language for offices on busy Mortimer Street, facing the commerce of Oxford Street. The joyful art nouveau brickwork of buildings at the back of the site on Riding House Street, plus a listed facade along a side street, prompted an exploration of brick details that has been carried through at a scale and quality that makes each street a richer experience. Service access for the whole site is via a single basement access, reducing the disruption of vans and rubbish trucks and the blank grubbiness they impose on the street.

An earlier scheme by another architect, Make, had deep-plan buildings and public routes morphing into curvy facades. When Exemplar and Aviva Investors took on the development and appointed LDS and Sheppard Robson this changed, as did the brief: the apartments and offices were equally important economically, and each practice had a hand in both types. ‘The client values both working cohesively,’ says Burr. A commercial lobby can offer presence and supervision to residents without being a ‘super-lit corporate mausoleum’, in Lifschutz’s words, while office workers should feel like they belong to a neighbourhood.

Lobbies guard the entrance to Fitzroy Place, but what to put inside was a harder nut to crack. Should it be buzzy and busy, should it have lots of shops and cafés? No: a little experience of the area revealed the dearth of quiet spaces, and with residents above it made more sense to provide one. On a cool summer’s day the pause offered by the newly named Pearson Square makes it more than a cut-through – here you can linger or even sit, as I have found to my pleasure. ‘We spent an inordinate amount of time thinking about the sun and the gap between the buildings,’ says Burr. ‘Would there be enough light, what do we do to get an intensity?’

At upper storeys the commercial buildings are only 7.5m apart in places. The apartments too can be remarkably close, the effect offset with careful positioning of rooms and screens. At ground level it seems worth it – when you enter the square you are squeezed enough to know you have left the rush of the street behind you.

Once inside the space doesn’t bleed out to the three paths through it but remains focused on the space inside. Pearson’s chapel, long hidden, pushes into the square where there is an amphitheatre for lunchers; climber-covered Corten softens the edges of flats while placing them at one remove. Landscape architect GrossMax has designed a more enclosed, handkerchief of a physic garden in the sunniest patch where fragrant herbs demand crushing. Compare it with larger pieces of city building such as Birmingham’s Brindleyplace or completed parts of Bristol’s Temple Quarter and you come away impressed. Here values seem higher, the facades more nuanced, the space more intense, but it is in the planting that Pearson Square comes alive. The development also shows that with the right handling the often dismissed perimeter block can create convincing urban space.

For the architect, some principles were set from the start: the strategy of ‘enhancing’ corners by using cutaways to give a little more to the street, and co-ordinating materials from white Portland concrete on the front door to the square to the brick flanks and back – the material paradigm of the Georgian terrace writ large. Likewise the ground, middle and top are each articulated. Lifschutz Davidson Sandilands’ two main buildings flip up at the top in a characteristically optimistic way that you can see on many of its projects from the Oxo Tower onwards. The commercial building arches its way across the sky rather like the flats of the Barbican but more lightly. LDS’ high tech-influenced design draws the eye upwards, beyond the datum of the Corten, up the delicate braces of steel and vertical rivulets of brick. The end wall of Sheppard Robson’s flats is incised to give echoes of the same verticality.

One could make the usual comments about this ‘public’ space not being in public ownership, or the lack of granularity in this area of small-scale streets and buildings. One elevation does seem rather soulless, despite sliding balcony screens. And the healthcare space and education room provided for the school opposite do seem to disappear, despite some architectural signalling at street level. But Fitzroy Place is remarkable for creating a believable bit of city, a task most architects still seem to struggle with, and for that this team should be congratulated.

The chapel too should get credit, as the sole survivor of the Middlesex Hospital on this site. Its brick softens the newer materials of Pearson Square and imbues it with meaning. The airy restaurant has a view of the chapel interior, and sitting there, catching the glint of its gold nave, you are reminded of the preciousness of the innermost Russian doll: inside the square, inside Fitzroy Place, inside Fitzrovia.