Berlin’s Humboldt Forum, an unlikely fusion of old and new by Franco Stella, needs more than a new building to drag a rebuilt baroque palace into the modern world 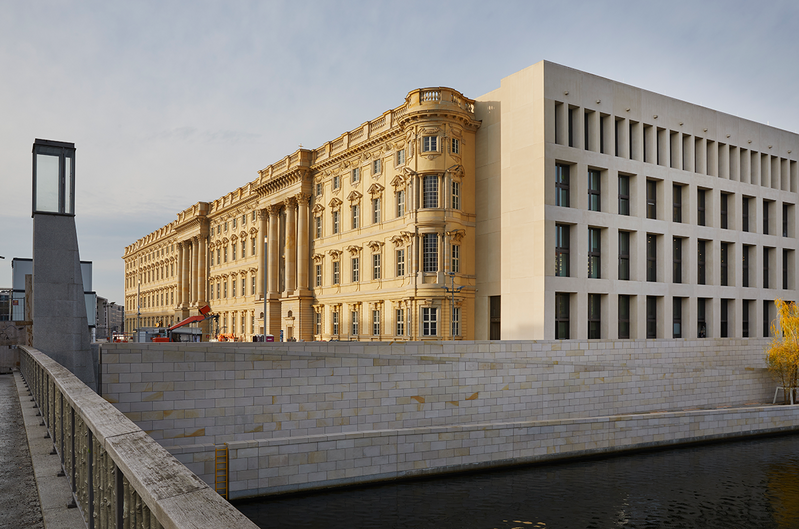 The baroque Humboldt Forum replaces the DDR's Palace for the Republic - you wouldn't recognise it now. Credit: SHF - Christoph Musiol

The so-called Humboldt Forum is one of the most problematic buildings in Berlin, a city certainly is not lacking in controversial schemes (consider the airport disaster – more than eight years late and billions over budget).

Humboldt Forum can be found in the middle of Museum Island, the historic centre of the city, across from the Berliner Dom, the Altes Museum and the Alte Nationalgalerie, and close to the Pergamonmuseum with its recently inaugurated James-Simon Gallery designed by David Chipperfield. The forum would fit into this baroque-modern environment perfectly if only it did not look quite so disturbingly new in its dull yellowness, which those responsible call ‘quince’.

Italian architect Franco Stella won a 2008 public competition to design the building after the Association Berliner Schloss eV, a private initiative, proposed to rebuild the Berlin Palace in all its baroque glory. This was part of an ambitious goal to give Berlin – and therefore all of Germany – its ‘centre’ back and heal the ‘previously wounded cityscape’, according to its website.

The construction of this harmonious centre would in the end cost €677 million, and will devour €50 million every year to keep it up and running, heating included. 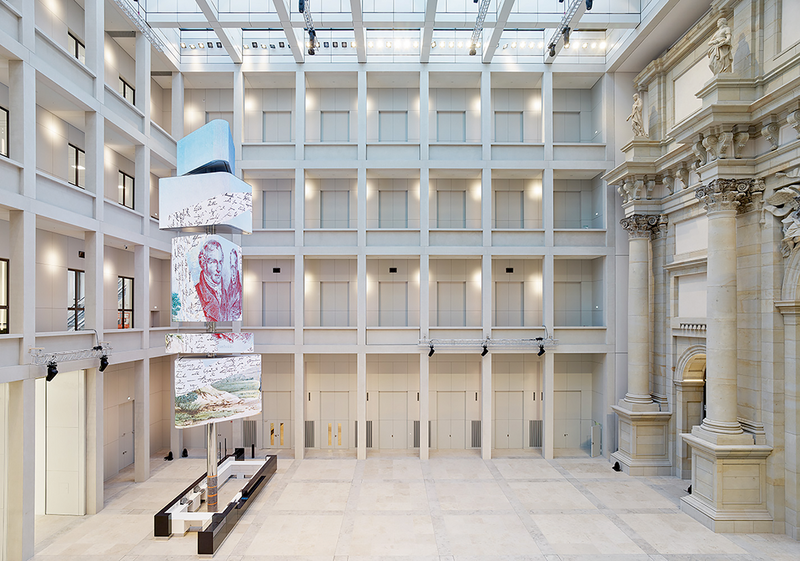 Architect Franco Stella's goal was to combine the 'new old' and the new in a way that leaves space for the past but also creates enough possibilities for the future to arrive - here one of the courtyards with the media tower stack. Credit: SHF - Alexander Schippel

Wilhelm von Boddien, the founder of the association, had dreamt of the reconstruction of the palace since he was a young man. He visited Berlin at the age of 19 in 1961 from Hamburg where he grew up, during the construction of the wall, and realised how wounded the city was. Out of that experience the idea and urge to reconstruct the palace was born, and grew over the years. It took almost 30 years once Germany was reunified, but if this reconstructed palace can stand for anything, it’s that childhood dreams can come true if one never gives up. It also shows, for white men at least, the incredible power that they can develop with the help of others of their kind. If one of them wants a palace in the middle of the country’s capital, such extraordinary men will join forces and will not stop until the dream becomes reality. But for a project with so much ideological baggage, perhaps true success depends on more than simply bricks and mortar.

The Berlin Palace was originally constructed in 1443, serving as the residence of Friedrich II, and received its impressive baroque facade during the 18th century under Andreas Schlüter’s transformation. It was severely damaged during WWII and torn down in 1950 by the German Democratic Republic – perhaps for ideological reasons, though it was claimed the damage was irreparable – which replaced it with an equally iconic building it called ‘Palace of the Republic’. Then again in 2006, the Palace of the Republic was demolished because of problems with asbestos, though again ideology has been suggested. To fill this void, the association, with von Boddien at the fore, insisted that Berlin needed the palace – or at least its baroque façade – back to be whole again. The reconstructed facade now looks weirdly untouched by time compared to its direct neighbour the Berliner Dom, which actually witnessed the fluidity of political systems and realities. That is a bit moldy looking, with tarnished edges, aging gracefully.

Stella sees his reconstruction of the building as a ‘city in the form of a palace’. So the strict, modern facade on the eastern side of the building, as well as the very plain modern elements of the interior corpus, were forward-thinking and ultra-modern 12 years ago, but now look a bit dated and remind the viewer more of a brittle administrative building. The layout resembles the former Berlin Palace and retains its six representative entrances, which Stella refers to as ‘city gates’ because they link the palace to the city. Inside, of five separate building elements are linked by open public spaces – an ample courtyard, a Renaissance-style passageway and a large covered foyer. It is hoped these places will be used by a curious public flowing in and out of the building, making it part of a lively cityscape and creating the buzzing atmosphere of an Italian piazza. It is hard to imagine this however, while one is surrounded by CCTV cameras trying to dissuade homeless people from finding shelter in the newly built corners of these so-called piazzas. Yes, these are public spaces, but only for a certain public.

Intended to evoke some kind of universal sentiment, Stella’s ideas instead clash with the requirements of a modern museum throughout the building. The opera-like boxes surrounding the foyer are too small and it is not really clear what they should be used for. Its coffered ceiling is not as elegant as he wanted because it needed to be stabilized to bear the weight of spotlights and other technical equipment. And don’t mention the media tower – almost as high as the ceiling and consisting of stacked rounded triangles that completely contradict Stellas’ idea of rational clarity – it will soon run videos and information boards. The facade on the eastern side, the only one without baroque beauty enhancements, looks extremely gruff, perhaps due to the contrast of its immediate proximity to all the baroque flamboyance, which renders it even more plain rather than universal.

Stellas’ goal was to combine the old and the new in a well-balanced way that leaves space for the past but also creates enough possibilities for the future to arrive. This space is revealed in all the gaps Stella left and the places where sandstone walls crash into each other: baroque elements are found not only on the outside but also within, where they mess up every attempt to view the ensemble as even remotely harmonious. The contrast between the old (which is as new as the new) and the new is too harsh and one feels weirdly trapped in this gigantic building that has 40,000m2 of floor space.

The Humboldt Forum in all its baroque splendour, the Alexanderplatz TV Tower in the background is one of a dwindling number of iconic East German artefacts in the city. Credit: SHF - Christoph Musiol

One of the problems that is palpable at every corner is that it’s not the content that needed a form but rather the other way around. So only after the decision to (re)build the palace did anyone ponder what it should be used for – and the Association Berliner Schloss needed a reason why the German Bundestag should support it financially.

The association knew that proposing to build an empty castle because it’s nice to look at wouldn’t do the job. So it came up with the Humboldt Forum concept and the German Bundestag agreed to fund the structure and interior, while the facade was financed by donations raised by the association.

Inside the new palace contains a series of semi-public courtyards and open spaces, inspired by Italian piazzas. Credit: Humboldt Forum

The Humboldt Forum was conceived as a space where Germany could show its cosmopolitan open-mindedness towards other cultures – in the spirit of the Humboldt brothers. In the public eye, these brothers present the perfect German heroes; liberal philosophers and educationalists who promoted the ideas of the Enlightenment. Alexander von Humboldt was a world traveller and naturalist who stands for the unprejudiced pursuit of scientific knowledge, while Wilhelm was the Prussian minister of education and is the name-giver to Berlin’s Humboldt-Universität. Yet when the Ethnological collections and the Asian Art Museum moved in, ignoring the urgent global debate on restitution, there was no explanation of why it had seemed a good idea to spend €677 million on building a house for the collections but create only four new positions to research the provenance of their artifacts. Next to the museums, the palace also houses event spaces, restaurants, research facilities and administrative offices.

All this makes the Humboldt Forum one of the most discussed buildings in Berlin's present, and even after its opening it will continue to be a site of contestation. It is to hope, for the sake of the ‘lords of the manor’, that this debate will finally move into the building and not stand forever only in the courtyard waiting to be granted an audience with the king. However, if one believes what von Boddien said in an interview with a local TV station back in early 2020, the Humboldt Forum only occupies the palace now, one has to see what will happen in 200 years…

On a more positive note, Stella has created space on the building’s eastern side, facing the Spree river, which was never accessible from here before. By pushing the palace back a few metres, the architect has created direct access to the river  after more than 800 years.

Perhaps that will help to realise the utopian-like idea of the initiative ‘Flussbad Berlin’ that wants to clean up the river and make it accessible to swimmers. And since the reconstruction of the palace has proven possible, why should this idea stay a dream?

Laura Helena Wurth is a writer based in Berlin