There’s a new personality brightening up a corner of Crouch End, courtesy of Panter Hudspith’s refurb 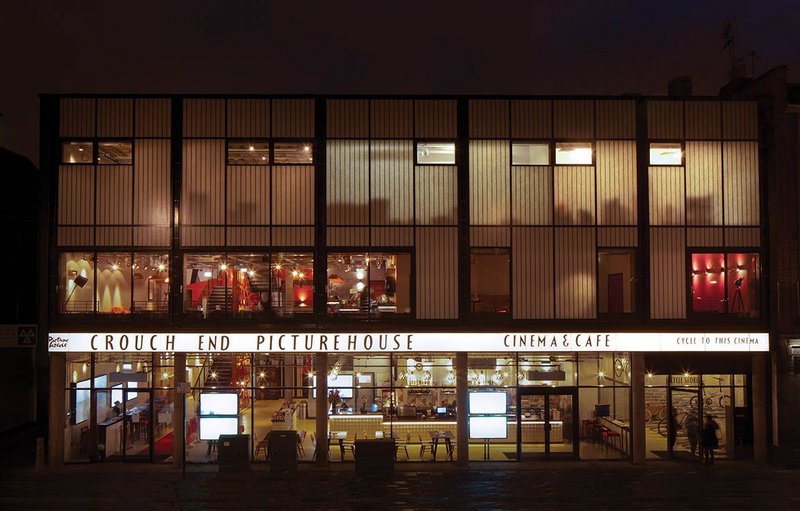 It helps to have known a building before you assess its transformation, and I knew this one. The Crouch End Picturehouse in north London, a five-screen 604-seat cinema designed by Panter Hudspith, re-uses and reveals the structure of what was previously a respectable piece of postwar bomb site infill: a well-proportioned concrete-framed, curtain-walled office building with a broad five-bay street frontage. But the building was perched up on its pilotis, left void at ground level for car parking, giving nothing to the life of the street. This has now changed.

There was no planning requirement to keep this building – it and its motley assortment of neighbours fill the bomb-ruptured end of an otherwise well-mannered late Victorian/Edwardian shopping street, a wound that has never properly healed. ‘They would have been quite happy for us to knock it down,’ says project architect James Jeremiah, ‘but as architects we have a responsibility to reduce waste.’ Besides, both client and architect saw the merit in it.

They noted the generous floor-to-ceiling heights and lean but mostly sound structure, and saw that it could lend itself to cinema foyers. They recognised that this was a rare architect-designed 1950s modernist building in the area, to be re-revealed rather than disguised. And from a practical point of view, behind it lay a tight pack of time-expired asbestos-roofed brick-sided factory buildings rudely intruding into what is now an upmarket enclave of residential streets.

They filled the footprint of what had been a cinema from 1911 until the Blitz, which by happy coincidence for a while was also branded The Picture House.

These sheds were gutted and replaced with the necessarily blank boxes containing auditoria, intended to vanish beneath climbing plants.

It’s not easy to get approval for big adaptive things like this in affluent north London, even if you do include such very Crouch End inducements as a large covered bike store and baby buggy park. And it was pipped to the post by a couple of years by the smaller Arthouse Cinema in a former Salvation Army hall very close by. Combined with the recession, it meant that this project has been on Panter Hudspith’s books since 2007. But now it’s done, and there it is: re-imagined, a cinema with an array of photovoltaic panels on top rated BREEAM ‘very good’.

First impressions first: the new facade, while making a glazed enclosed ground floor level and insulating the upper levels in a way the original curtain walling did not, is aesthetically not a patch on its predecessor. That consisted of a pronounced grid organised as two horizontal ribbons of opening windows surrounded by opaque holly-green panels, with one bay done in a contrasting berry red. The new facade has a memory of this grid traced on it (though not in the same proportions) and eschews rich colour. It’s more functionalist in feel and organised to mark the bays, each in turn visually divided vertically into three. This, plus the vertical pinstripes of the 75mm Kalwall sandwich cladding, is somewhat at odds with the broad horizontal glazed strip marking the restaurant at first floor level on the left-hand side of the composition. The glazing system lines up with the vertical composition. Other individual windows are punched through as needed. From outside, it’s visually uneasy: should you read this facade sideways or upwards? It’s better at night, when it glows softly.

However, while the new facade itself is neutral in tone, there is plenty of colour in the interior which is visible from the street. And these interiors are the strength of this project. The scrape-and-reveal approach is done rigorously, the original in-situ concrete of the front block and the undersides of the clay-pot floors exposed in almost fetishistic detail. Original imperfect concrete beams were fire-protected. Behind, the broad corridor to the screens is flanked by a retained brick flank wall to the previous factory/warehouse buildings – left with all the marks of use, sealed against dust. New elements are clearly new, with new structure expressed in orange-painted steel –such as the highly sculptural new asymmetrical-latticework staircase linking the levels in a full-height daylit atrium at the back of the original block, a temptation to move to the upstairs restaurant. A tight existing concrete stair shaft provides lateral stability to the building and is retained (behind the bar at ground level). The top floor houses admin and a room for community use.

There is the odd touch of retrostyle in evidence: for instance the worn Rhodesian teak herringbone parquet flooring in the first floor restaurant is recycled from a demolished 1950s City office building. Doors through to the cinemas have mouldings that seem out of keeping but are based on originals found on site. A large specially-commissioned mural on the wall of the atrium by artist Ben Nathan is just the kind of thing (if not the style) you’d find on a 1950s public building. Behind the repurposed office block the five cinemas are placed in rendered steel-frame boxes out the back which are so massively insulated against noise transmission to the surrounding houses that at one point the acoustic wall is 2m thick. Such auditoria are much the same everywhere: there’s no particular distinction to the interiors.

Crouch End Picturehouse succeeds in establishing a cultural destination at the ‘wrong’ end of this retail street, which together with the nearby Arthouse, makes this into something of a movie quarter. It also succeeds in its policy of enlightened re-use – there is nothing forced about this conversion. Refurbishment, it proves, can yield more characterful spaces than new build.