When Assemble won a competition to convert rooftop water tanks into a galley for Goldsmiths, it was just the beginning

That’s what London University’s Goldsmiths did when its art department wanted a gallery space. Its head went up ladders above its studios to peer into the industrial gubbins on the roof, the pipes, the hoists and two huge tanks. These volumes, protected from the elements by night-dark cast iron panels, encrusted in pigeon guano, were at the centre of a modest competition to create the gallery, won by fledgling practice Assemble before it was  even nominated for the Turner Prize.

The gallery was intended to connect Goldsmiths to the contemporary art world and act as a resource for students, staff and research. But designers Paloma Strelitz and Adam Willis didn’t stop with the tanks; they redesigned the back of the whole building as a larger gallery than had ever been imagined. Eight exhibition spaces and £4.6 million later, the gallery has just opened. 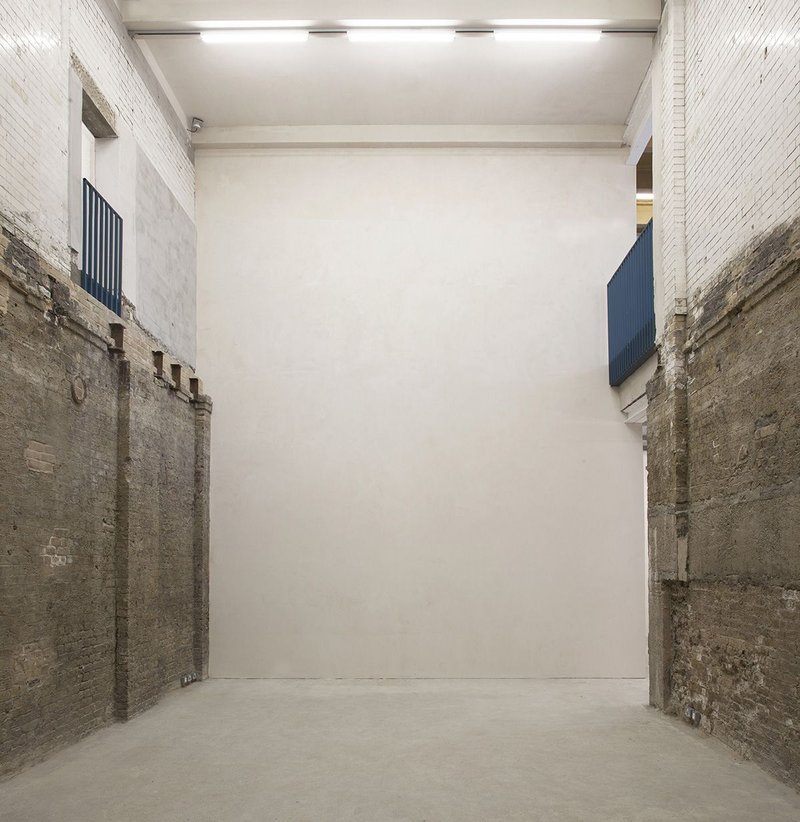 At first floor old and new openings look out onto the project space, here from the café. Credit: Assemble

Its name, Goldsmiths Centre of Contemporary Art, alerts you to the remarkable artistic reputation of this hodge podge of a college stuck out in New Cross, south east London. Its list of former students includes the now not-so-young Young British Artists and beyond: Damien Hirst, Sam Taylor-Johnson, Michael Craig-Martin, Bridget Riley, Gerry Judah. An auction of alumni’s works raised money for the initial stages of the project.

The gallery slots into a narrow plan at the back of the university’s painting studios, topped by the original project – the oiled unlined tanks flanked by two white box galleries. Beneath are two storeys of bastardised brickwork, their rough surfaces more ‘strip and expose’ than ‘scrape and reveal’. You could graze yourself on these walls. That feels raw and right when – as the press did to dodge student protests – you enter the back way through a laby­rinth of passageways and fire escapes. But if you take the more conventional route, via the front entrance with its oversailing porch and on through a polished and clearly legible sequence from reception to stairway to galleries, the roughness takes on an uncomfortable sense of artifice. The duality of the more polished gallery spaces versus the raw project space, café and smaller galleries could be easily be explained by perfectly rational decisions on where to spend the money – but Assemble did it to give each space its own, idiosyncratic, character.

At its most banal level this is expressed as gold paint on the ceiling. At its best, the dimensions and geometries of the site are emphasised and stretched into difference with a real sense of three dimensional understanding which has allowed Assemble to ignore options that might look more logical on plan. This is most visible in the project space, where the floor slab has been knocked out to create a narrow double-height room for ideas to be workshopped and discussed. It is not the building’s atrium, as it would be in many a diagram: you can enter and exit three ways at basement level. From above, cut-outs in the walls allow you stop and observe, but not become part of the action. Alongside, the ground floor café kinks into the perimeter of the plan almost uncomfortably while a passageway linking two staircases is a thin leftover of uninspiring corridor. It should be either underused or a pinch point, yet it seems more than that; an extra layer to explore or favourite cut through for those in the know.

The circulation of the main staircase is entirely separate from the vertical volume of the project space. It reads as a new stair in an old space, topped by a Victorian rooflight. On second reading why is the external window of the old pools facing out into the stairwell? In fact the whole section has been extended up a storey for the new galleries alongside the tanks and the Victorian rooflight moved up with it. The delicate steel trusses of the two white cube galleries will pick up the top light of lantern and clerestory; although for the opening exhibition they were turned to black boxes, one entered through a tunnel that more than one critic has wanted to be a permanent feature.

Sandwiched between the two white galleries is the black tank, its cast iron panels pock marked with years of degradation but oiled back to a shine. The tanks have been stripped of the struts that held in the water and their structural logic reversed to resist wind loads, with new steel ribs almost invisibly tied back on existing holes. An extra panel’s depth of windows perches round the top of one. Unlined, uninsulated and unheated, this will be a gallery of extremes (we should have more of them). Mika Rottenberg’s installation at the opening exhibition plays on the dark drama of the space with cast iron frying pans throwing up hissing clouds of spot-lit steam.

The second tank is opened up to the sky as a sculpture courtyard. In the light of day the cast iron takes on a more workaday texture. From here you can also get a close up of the outside of the new galleries which are clad in a corrugated cement fibre board more often used rather dully in agriculture. Despite the scale of this project Assemble hasn’t relinquished its making ambitions. It got closely involved in fabricating the cladding, using ridge pieces between layers, water-jet cutting and creating sills between layers and designing new fixings. The architects even put together the concrete acid wash stain and  painted it on themselves. There are other such interventions, the folded steel plate café chairs (with an iridescent golden surface kind to the eye but a little sharp and uncomfortable), the marbled splash backs of the basins, the pink cast concrete of the servery and the lampshades from the group’s Turner Prize winning Granby Workshop. And in the tanks, Assemble transferred their metallic elements to the new wood panels, coating them in a solution of wire wool dissolved in vinegar.

So much art, like architecture, is designed too remotely from making. Assemble’s Goldsmiths CCA gives you a little poke, a reminder of the many routes to inventiveness.