Manchester’s Ancoats district, just north-east of the centre, was the heart of the city’s huge industrial expansion from Georgian times onwards. Framed by two canals – the broad, beefy transpennine Rochdale and the narrow, delicate local-connections Ashton, both corridors for early 19th century and later mills – it has been the focus of intense redevelopment in recent years. Mills are converted, new residential blocks inserted, and in the New Islington quarter you find the wholesale redevelopment managed by Urban Splash (originally masterplanned by Will Alsop) which stretches between and links the waters of both canals. On Blossom Street a few blocks north-west of there, however, you find a different kind of conversion and extension. This is the Romanesque 1859 former church of St Peter’s by Isaac Holden, which until 2013 was abandoned and near-derelict. It is now a rehearsal and education centre for the Hallé Orchestra.  Its new Oglesby Centre extension by Stephenson Studio is placed right in front of it.

Yes, a new building between the grade II listed church and its (relatively recent) parvis, Cutting Room Square. That might sound a bit mad and indeed the 2016 RIBA competition for the £4.2m extension attracted its share of raised eyebrows. Other entrants were Caruso St John, FCB Studios, Flanagan Lawrence and Jamie Fobert.  But it was Manchester boy Roger Stephenson’s practice that got the thumbs-up from the judges, including Sir Jeremy Dixon, Niall McLaughlin and the Halle’s representatives. It must have helped that Stephenson’s practice had previously delivered the city’s well-regarded new building for Chetham’s School of Music. 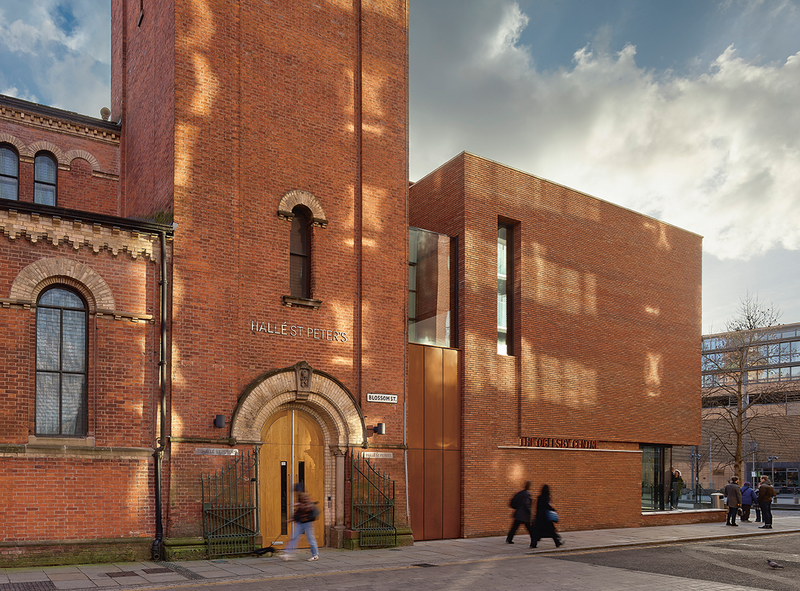 Forward march – the original entrance to the church is in the northern side and other buildings used to adjoin it at its western end where the Oglesby Centre now stands. Credit: Daniel Hopkinson

So you expect some oddness – church on square with modern frontal extension – but when you go there, it makes a surprising amount of sense. First, with streets right up to it on the other three sides, there was nowhere else to expand. Second, there was no entrance, grand or otherwise, being obliterated as the church with its original side entrance had not addressed the square at all. In the past other buildings had butted up to it and left their marks on its largely blank brickwork on this end, so different from Holden’s richly modelled flanks, apse and campanile. Third, the new long thin ‘Roman’ burnt-red handmade bricks  achieve an excellent colour match for the old church, the massing and parapet levels respond well to it, and the campanile becomes a point of focus as you enter the building from the square. As the stair rises through an atrium to the main rooms on the first floor, there is the tower looming right above you through the glass.

In fact the Oglesby Centre gives the church an entrance to the square it never previously had. It opens up to it – via a structurally ambitious corner cantilever visually carved out of the block – with a public café at ground floor level and a new link from there cut through the enormously thick brickwork of the campanile base to the previously restored main body of the church, with its slender iron columns helping the orchestral acoustics. 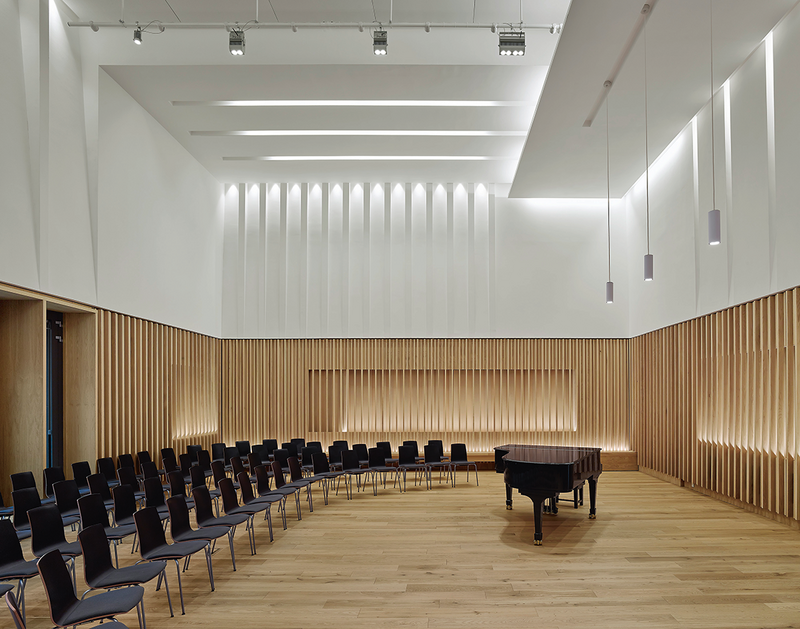 The acoustic treatment of the surfaces in the rehearsal/recital room is thoroughly architectural. Movable thick felt drapes lie behind the timber panelling. Credit: Daniel Hopkinson

The other key material here is Cor-ten oxidising steel, used to express the form of the large first-floor rehearsal room. Cor-ten is too often used in the wrong places, just as a fetish product. Here there is a clear rationale for its use: just as so much of this part of Manchester is red brick, so also there was always a good deal of exposed ironwork, with factory water tanks very visible. The steadily darkening steel, on its journey from orangey to conker-brown, sits just fine with the brickwork and its dark lime-mortar recessed joints.  A consciously industrial rather than ecclesiastical aesthetic, it is detailed with a concealed gutter to avoid rust streaks down the brickwork below.

The Hallé Orchestra, for all its illustrious yet frequently chequered history since Sir Charles Hallé established it in 1857, had no permanent base of its own to rehearse in until the St Peter’s project. The church thus performs much the same role that St Luke’s church in London’s Old Street does for the London Symphony Orchestra which is associated with the Barbican.

The brief asked for rehearsal, performance, education, administration and support spaces for the orchestra and choir, plus the public café space (a second largish rehearsal room could with difficulty have been added but, perhaps fortunately for the overall composition, this was dropped). Although the building steps forward from the church, it also digs down: the basement (daylit from pavement lights) is a cellular layout that includes a large practice/education room, offices, instrument store, plant room, café kitchen and toilets. The excavation caused a literal wobble moment during construction when the campanile was observed to move fractionally, about 15mm, due to soil dynamics. It was quickly stabilised but the construction team still quiver slightly when they mention it.

The big rehearsal space – intended for smaller ensembles than the full-orchestra volume of the main church – is for recording use as well, and like the practice rooms is acoustically isolated in a box-in-box arrangement.  It’s a well-proportioned space in which the usual wall and ceiling acoustic treatment is subsumed into the architecture.  The architects – Stephenson working with co-directors Keith Hamilton and Justin Risley  and associate partner John Boardman – wanted a less timber-dominated interior than at Chetham’s so went for an almost country-house aesthetic of light oak timber panelling up to a certain height, flush with white plastered surfaces above that.  Unusually, it is not a blank box: a row of tall triple-glazed windows, zigzagged for acoustic reasons, looks out over the square and provides external evidence of activity within. The acoustic can be varied to some extent with thick felt moveable drapes set in apertures behind the panelling. Necessarily low-speed silent air handling comes from rooftop plant concealed behind the wall upstands.

There is a sense of proportional rightness to the massing of the building. Deference to the church is apparent, but not subservience: the new building is confident in itself, if muted in tone. It plugs into the church firmly without overdoing the glazed links. It’s a satisfying thing when architects design proper boxes, but then Manchester has got plenty of precedents to draw on.