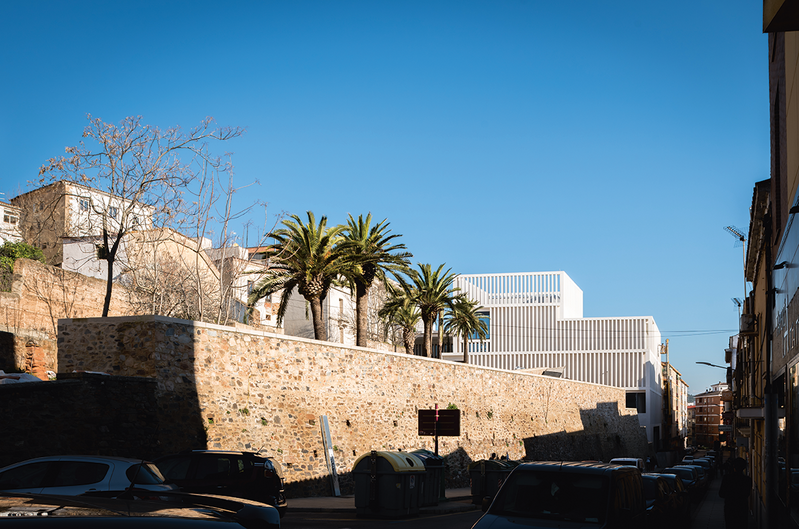 View up from the Calle Camino de Llano, marking the medieval border of the old town. Credit: Amores Pictures

The Spanish province of Extremadura has been battled over for millennia since first being conquered by the Romans. It was a caliphate from the 8th to 12th centuries, and once recaptured by the Spanish, had to deal with an expansionist Portugal to the west. It explains the towers of the walled city of Cáceres, a number of which – notably the 12th century Torre del Bujaco – still guard its old town. But it has another historic enemy – poverty. There’s a reason why the New World shares many place names with those of the province; conquistador Francisco Pizarro was one of its many sons driven to seek fortunes abroad that had eluded them at home.

Extremadura remains the second poorest region in Spain, a stark reality that noted art collector Helga de Alvear was perhaps attempting to remedy with her new Museum of Contemporary Art. This, together with the 2015 Mies van der Rohe Prize shortlisted Atrio Relais & Châteaux hotel by Mansilla + Tuñón, is intended to draw new tourist hordes – and their gold – to the medieval Unesco Heritage City. De Alvear kept on Emilio Tuñón for her museum, to work his magic on a steeply sloping site at the medieval town’s south west corner, where it fights off the more prosaic 20th century expansion in the valley below.

This latest project is effectively a size­able extension to the Helga de Alvear Foundation’s 1913 Casa Grande, the restoration of which had formed the first stage of this commission. But the art gallery’s civic purpose, and the size of the project, means it has become an urban-scaled intervention. By developing the language of wall and column that he first adopted at the hotel, Tuñón’s museum skilfully stitches together two distinct parts of the city.

Hidden behind an intimated town house facade alongside the Casa Grande, the ­museum reveals its nature and stature as it cascades down the valley, its storeys defined in elevation by concrete walls and fins or columns that shift subtly in relation to one another. That nuance manifests in plan too, where the museum’s parallelogram is echoed in the detailing of the columns, each of them skewing a touch to face the new town.

Internally, the materials are similarly Cistercian, with industrial concrete float floors offsetting bespoke windows or ­reveals of oak and fine plaster soffits. Such asceticism is damned to hell with the galleries’ sheer size and Tuñón’s sectional indulgence of any­thing up to 9m; but all is forgiven in the spatial drama.

The real beauty of the project however lies in the creation of a new route that brings joy and levity to the laboured task of ascending 20m from the lower street to the old town. An elegant stone stair now draws people up the side of the valley to a generous terrace offering shadow and verdure, overlooked by the museum’s shaded open-air entrance. A staircase to this bridge level then guides them on and up through a wide, covered passageway to pop out from that town house onto the old town’s curving Calle Pizarro.

It might not have happened; or could have all been done with the hubris of an institution leaving a public imprimatur. But instead this complex journey from the roadside’s hard sunlight to the respite of a raised courtyard, and past the gallery on up through Tuñón’s pre-emptive gloomth into the heart of the medieval quarter, is done with humility yet assurance. A large museum that has insinuated itself into the quotidian life of the city.