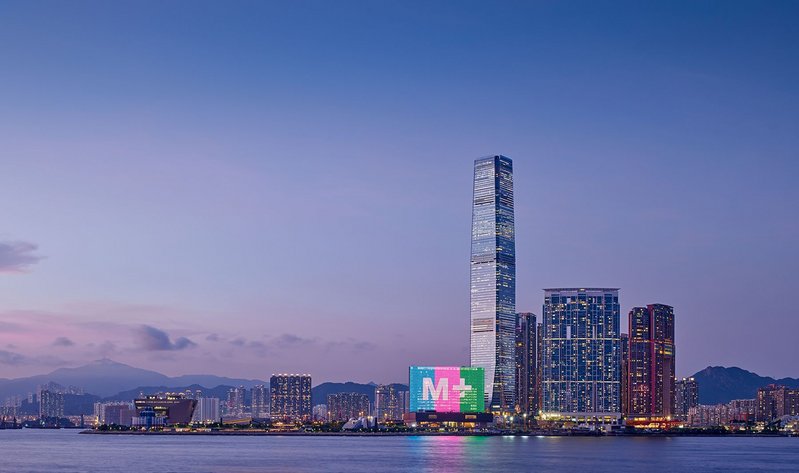 Given that, to western culture, art in all its forms represents the apotheosis of individual expression, it should come as no surprise that such a concept might not sit easily with the tenets of Communism. In 1942, Mao Zedong stated that ‘There is no such thing as art for art’s sake; art that stands above classes or art that is detached from or independent of politics'; and in 2014, when President Xi Jinping gave an address to the Beijing Forum on Literature and Art, his own theory of art seemed to plough much the same furrow.

The New York Times cited the Xinhua News Agency account of Xi’s ‘quantity over quality’ view that ‘culture is derivative, plagiaristic and stereotyped' and that it produces ‘mechanised fast food’ that is full of ‘vulgarity’ and ‘lust’. Instructing artists to employ feel-good techniques to inspire rather than question, ‘he made clear where artists stand in his China … Artists should implement "the party’s policies on the arts". Artists should not "lose themselves in the tide of market economy nor go astray while answering the question of whom to serve”.’

The speech came a year after the announcement that Swiss architect Herzog & de Meuron’s had won the commission to build Hong Kong’s M+ Museum – ‘Asia’s first global museum of contemporary visual culture’, which after eight years in the design and construction alongside local executive architect TFP Farrells and engineer Arup, was inaugurated virtually to the world’s media last month.

Its distinctive inverted ‘T’ section now forms one of the anchors of West Kowloon Cultural District, a Foster + Partners masterplan that has reclaimed 41ha of land from the harbour end of the Kowloon peninsula, turning it over to a 23ha public park. This will connect back to Kowloon via a proposed avenue of cultural facilities. Of this, only the XiQu Centre at the east end exists.

The new M+ forms a campus with the adjacent conservation and storage facility and 16-storey WKDCA tower. They will be joined in 2022 by the Hong Kong outpost of Beijing’s Palace Museum, whose only other iteration remains ‘in exile’ in Taipei, holding the most prized items of the Imperial Art Collection, covertly dispatched to Taiwan by Chiang Kai-shek from 1948 as the tide turned against the Nationalists in its civil war with the Communist army. Its promulgation here, given Hong Kong’s ongoing pro-democracy protests, seems of particular resonance. Xi Jinping is clearly aware of art’s power to invoke the cultural soul of the nation, and that the wished-for ownership of the Imperial Art collection, according to US political and cultural commentator Andrew Solomon, ‘legitimises the power of whoever holds it’. Not only that, it also stamps the imprimatur of political power on the territory.

But there is no doubt that M+ will put Hong Kong on the cultural map in much the way that Jean Nouvel’s Louvre Abu Dhabi has done for the UAE, if that were only due to its sheer scale. Contained in a plinth of striking horizontality in counterpoint to the city around it, the 65,000m2 building has 17,000m2 of dedicated exhibition spaces spread over 33 flexible gallery spaces, with a ground level that allows access from all four sides – notably Kowloon MTR station from the north. The new facility isn’t just an art gallery; it houses three cinemas, a mediatheque, learning hub, research centre, shop, bars and restaurants and a roof garden with world-class views over Victoria Harbour to Hong Kong Island opposite. Above it all, clad in dark green horizontal fins of glazed terracotta, a wide 14-storey tower addresses the harbour, the tips of its fins impregnated in high-tech LEDs that turn the whole building into an enormous media screen, adding to the cityscape’s unique dazzle.

But impressive as this gesture might be, it is not what Herzog & de Meuron senior partner Ascan Mergenthaler finds most impressive about the project; it is what you discover once you enter it. The presence of the nearby Kowloon stop of the airport express is a surface intimation of the rail tunnels below M+ which have become key parameters in the creation of its form; not surprising considering the architect was otherwise dealing with a flat tabula rasa of reclaimed land.

‘When the presence of the tunnels was first revealed to us by Arup, it piqued our interest,' he says, 'and its subterranean stepped form was something that we saw as quite beautiful. So we decided to make this the foundation of the entire project.’ Mergenthaler explains that it drove the whole sectional approach, generating the 130m x 111m gallery podium that hovers above the entrance level, as well as the revealed ‘found space’ below it, which now acts as a public circulation and exhibition space. ‘There are two large two large slits in the podium where daylight comes in, giving views up either side of the tower,' he says, 'and there is a moment where, down and up, you perceive the section of the entire thing and it’s quite stunning.’ Running alongside M+’s cultural and political topography then, is this physical one. 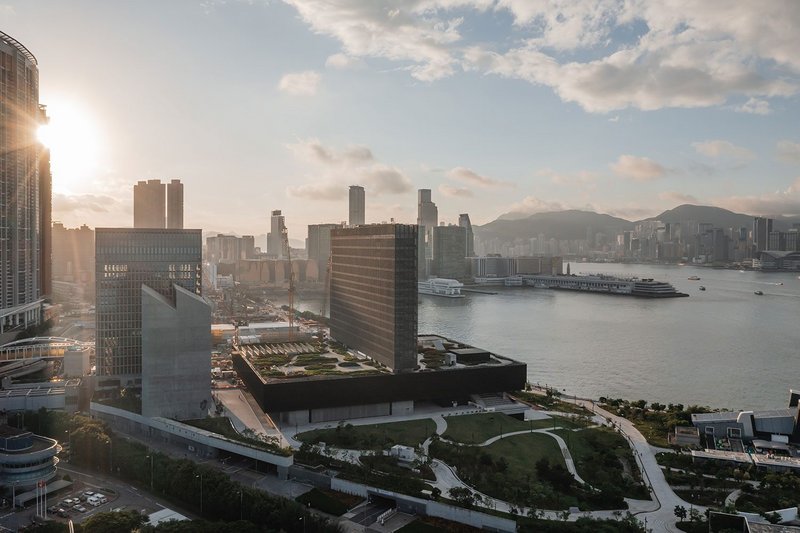 Luckily for Herzog & de Meuron, Farrells’ longstanding involvement in the city’s infrastructure development made them acutely aware of both the problems and the potential of the found space, which proved the project’s biggest challenge. ‘Being tunnels, we knew we couldn’t load them,’ explains Farrell’s director Gavin Erasmus, 'so the engineering challenge became to bridge over them. This gave rise to the five concrete and steel "megatrusses" that run through the podium level and allow the whole building to span over it.’

The biggest of these are the two trusses that take the load of the tower – a gargantuan 55m wide by 18m high, meaning it is only the two slim cores at each end that carry their load down either side of the tunnel zone. Supplementing these is the building’s gridwork of piles, sunk as deep as 50m into the sea-reclaimed land.

The infrastructure archaeology revealed in the found space permeates all the way through the section in the timber-shuttered in-situ cast concrete structure on show at ground floor and gallery levels. Mergenthaler seems to want to emphasise both the innate flexibility of these spaces as well as the vertical sectional flow. For sure, there’s a refreshing simplicity to the ground level – effectively an enclosed but open, central orientation space framed by four large, dedicated zones: the learning hub and moving image centre to the south, the M+ shop to the north-east and main hall gallery to the west. Escalators move you down and up from here, although there’s a big spatial move in the external ‘grand stair’ at ground level that draws visitors into the south-east part of the atrium – the central orientation zone of the podium gallery level.

The conventional orthogonality of the galleries gains a lot from the building’s siting, and with amazing views out. With light being able to enter down from the roof garden above, it offers a sense of drama that might not otherwise be gained from any number of works by artists who aren’t, say, Louise Bourgeois, Ai Wei Wei or Ren Hang. On permanent display is Antony Gormley’s sculptural installation 'Asian Field' – not far off a quarter of a million clay figurines commissioned by a white westerner and fashioned by 350 Guangdong villagers in less than a week. Dubious for both these reasons in my view; here they happily jostle past any critical reading and occupy pride of place, crammed into M+’s huge, 2,000m2 West Gallery.

But this is China and it’s not so much about the numbers as how they’re contained. Mergenthaler says the decision to clad the podium and the tower above it in shades of green, glazed tiles was actually arrived at as the design developed. It turns out the city’s famed maritime context would be too severe on the metal façade originally proposed, so the firm looked to the local vernacular and merged concepts to produce their distinctive forms.

‘We were inspired by the tiles on the local temples as well as the corrugated metal roofs that appear all over the city,' says Mergenthaler. 'Ceramic is a sturdy and solid material and due to the nature of the glaze, changes dramatically in tone over the course of a day.’

Expressed both outside and in, some of the cladding emulates bamboo forms, while other parts manifest as deep super-corrugations in varying, rich hues. From lime to celador, to forest greens, together they bring a sense of handcrafting to this highly engineered structure. 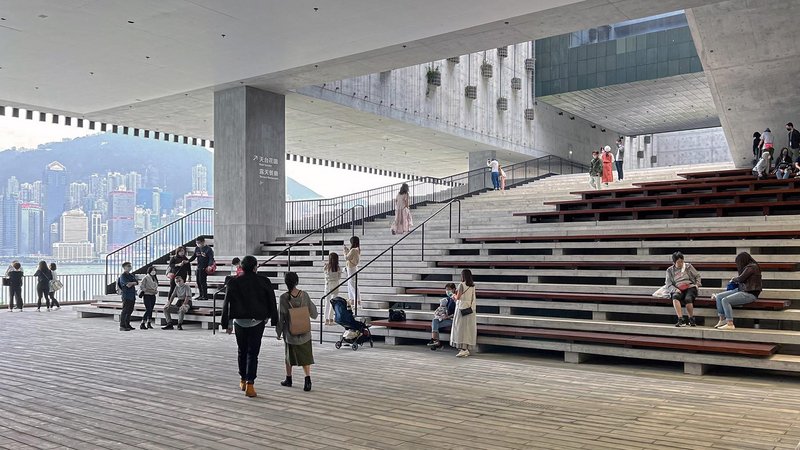 Notably, while the inspiration was Chinese, the tiles that were later keyed into cast concrete panels 2.5m wide and up to 4.5m high, were sourced from Italy.  ‘The intent was to source locally, but the tiles were bespoke and needed to meet the performance specification and be delivered in the right quality and quantity', says Erasmus. To that end, full-size mock-ups were built to show the design intent and used as ‘controls’ during the cladding process. ‘With the requirement for the right firing and application techniques, as well as necessary warranties, there were few suppliers who could have taken the challenge on,’ he adds.

With the huge media screen on the south side, the technology only got more complex – the result of being set into the tiled horizontal fins spaced at 600mm centres all the way up the tower’s faces. Herzog & de Meuron originally wanted these fins to provide passive shading and cooling to the tower slab, helping the building attain the local BEAM Plus sustainability accreditation. But using the tip of each louvre on the south side to embed the LED strips for the massive media screen was a perfect design symbiosis. To add to the complexity, Erasmus adds, there are actually two screens with two focal lengths: ‘The high-res one looks out to the harbour and the low-res to the rooftop garden in a "lenticular" arrangement. It took a lot to convince the client that the technology would work.’

With what looks like significant amounts of money being spent to realise the project, the investment must be seen as an attempt to define an increasing cultural role for the territory and China itself, but time will tell if that can only be read as an empty gesture in the face of ongoing regulation of the arts and political freedoms.

If anything, M+, like its media screen, pulls these issues into sharper focus. Indeed it reminds a cynical west, increasingly governed by the group thought of social media, of how art’s individual expression can still be a powerful means of protest. Whether M+ becomes a self-confident vessel of that dangerous potential remains to be seen. But if singer songwriter Gil Scott-Heron’s 1971 prediction is proved wrong and the revolution is televised, then it looks like Hong Kong Island will be getting a ringside seat.