When you’re dealing with the minute detail of graphene, a safe environment is key. Jestico + Whiles’ Institute secures and shows off the lab

In the half light the elements of the institute become more visible on the facade. Credit: Hufton & Crow

A floor plan bright with vibration contours is the first thing project director Tony Ling, of Jestico + Whiles, shows me of the National Graphene Institute. For him it was the starting point of the project. ‘All science takes place at the nano-scale,’ he explains. The tiny shift as a lorry rumbles past can jiggle the scanning electron microscope or shift the tiny speck of graphene into the wrong place on its silicon slide. For it is graphene we are talking about here. That stuff of pencils that was isolated in 2004 as sticky tape peeled off sticky tape layer to leave a single atomic layer of two dimensional hexagonal lattice. For this Manchester University academics Sir Andre Geim and Sir Kostya Novoselov were awarded the Nobel Prize and knighthoods. It carries high hopes in microelectronics and hydrogen fuel cells, and has already caused minor ripples in areas like light bulb filaments. Flexible yet 200 times stronger than steel and hugely conductive, it is not surprising this is considered as a wonder material by some.

In T-shirt and jeans the casually lunching Novoselov, who was the very engaged user client for the project, talks about the National Graphene Institute. ‘The people and the building are quite different,’ he says. This isn’t surprising. His colleague Geim has complained very publicly that the £61m cost was invested in the building industry rather than graphene research – in fact £35m went on what we understand as construction. However, with 230 researchers across the University of Manchester, in many different disciplines, and up to 120 in this building, the collaboration this new institute can engender is all important. The clean rooms are at the crux of this as a working environment in which scientists come together. Once those bonds of familiarity are formed, people behind blue body suits and masks meet and exchange ideas: and the atrium, break out spaces and open plan labs come into play. 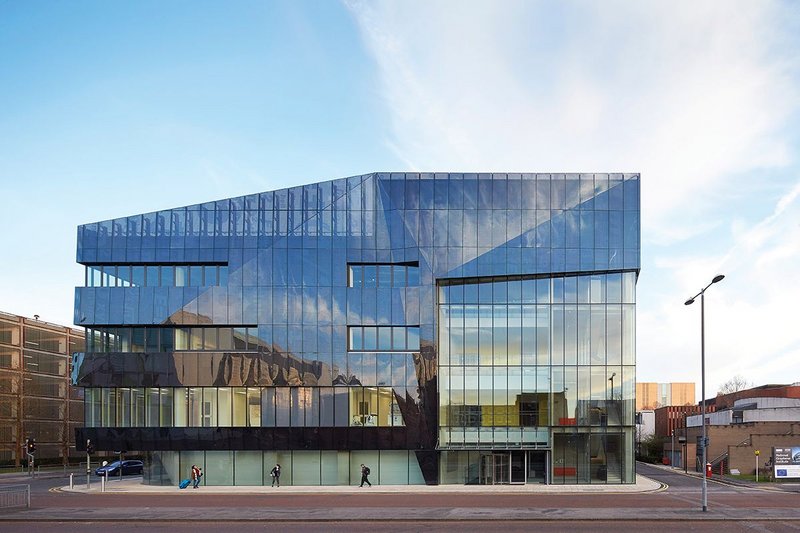 Glimpses into the clean room and a glazed stack of circulation above the entrance cut into the screen with its barely visible equations. Credit: Hufton & Crow

So for Novoselov the building is about collaboration. But first, at their hub, it is about ‘world class clean rooms’. So back to those vibrations. Ground investigations showed a stable layer of shale 4m below ground, then bedrock. Anchoring the slab into the shale and placing the largest of the two clean rooms directly on top of that in the basement was far cheaper than bulking up the structure at higher levels. Piled columns that pass through the slab separated by soft joints support these higher levels. But a clean room is more than a series of super clean labs. Keeping down dust particles with 50 changes of air an hour means they are built as ‘ballrooms’ with three layers. The filtered air is dropped in from above in a huge plenum, 3m high in this one and accessible by gantries. Extracts in the perforated floor return air through the ‘dirty’ corridors, which also house a multitude of gases and pumps. Underneath is 1.2m of plant. And while we are on plant, you should know that it makes up 45% of this building, including air handling, ultra pure water distillation and exhaust fans. In fact its west section mainly houses plant with a separate structure to ward off any untoward vibrations.

Jestico + Whiles deals with this 1000m2 ballroom in a satisfying way that sets the tone for the building. The glazed edge of the ground floor allows passersby to peer into the clean room – past a cut-away wall of the service floor and the internal viewing corridor with its concrete curve. Glimpses of scientists stooped over their tools and the machines themselves invisibly whirring away on experiments will enliven this rather dull street, as will possible displays projected onto the wall. From the foyer the clean room plenum is on display, stretching into the technical distance. At the entrance there is no doubt this is the heart of the building, in comparison the slim atrium rising above is negligible – despite the shining surface of Mary Griffiths’ graphite artwork facing its top three storeys.

The dark heart of the building is conceived as the labs in which light must be strictly controlled. Jestico + Whiles not only buried it in the centre of the plan but also clad it in a black high shine PVCu surface normally used for hygiene. And excitingly for physicists, who breathe scrawled equations, it can be written on. Unfortunately there is not quite enough articulation of the separateness nor design and build care, nor justification for stopping and scribbling in the corridor for this to look convincing. But open laboratory areas ringed with offices and alongside a top lit atrium do make it look like a place where researchers will come together, as does the top floor of seminar rooms and roof terrace.

How much of this can you spot from outside? The lower clean room is visible, and the academic atrium with its angled glass panels breaking into the facade panels to go up and over the roof. But much is cloaked in a rainscreen cladding of incredibly shiny black mirrored stainless steel panels, called Rimex. This obscures the extra 2m projection on the south facade to hide a 7m high liquid nitrogen tank. Ling likes the way you can see the depth where the cladding is cutaway in horizontal bands higher up the building, referencing Herzog & de Meuron’s de Young Museum (though that surely avoids the clunky galvanised square sections that support this rainscreen, all too visibly from inside). Rimex screens on the roof terrace, narrowing at one end, might be expected to shield the planted roof from the worst winds or frame views of the city. But no, this is about creating a shape for the building says Ling. It also, very subtly, spells out that this is a place of science. Laser-cut holes in the 80% solid sheet vary in tiny increments to spell out equations in Novoselov pixelated handwriting. Here are the building blocks of graphene; if only you could see them more clearly.