Walmer Yard is a fascinating realisation of Peter Salter’s work, an exploration of light and dark, sound and touch 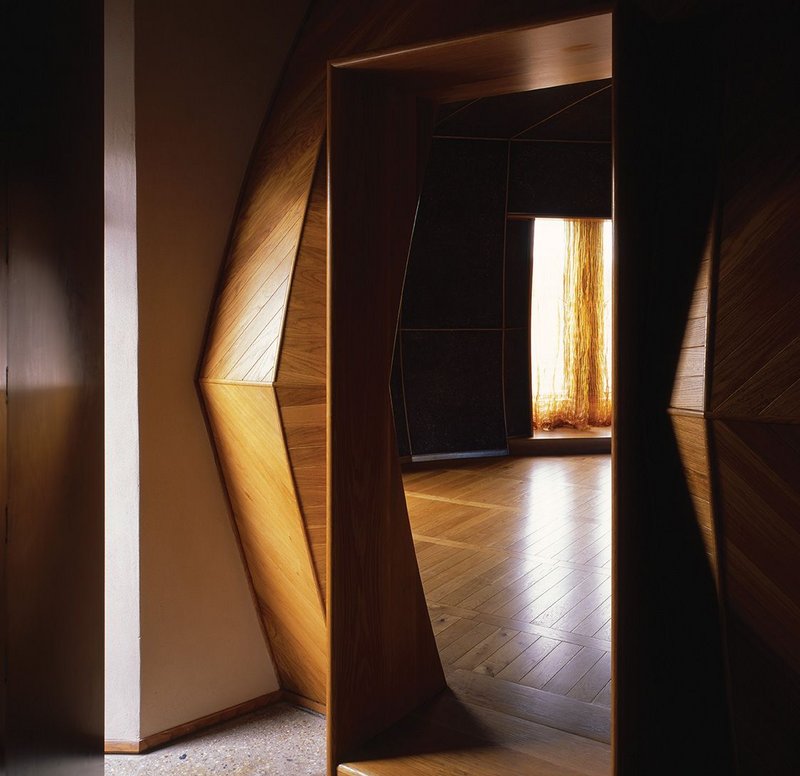 Maybe it was because we needed to return to earth. In the 1980s, at a time when architecture was in thrall with the deconstructivist notion of not only untethering architecture from the yoke of modernism and its programme but releasing it to fly free of gravity, it’s surprising the drawings of Chris Macdonald and Peter Salter weren’t merely dismissed out of hand as the work of a pair of Luddites who’d missed the boat. But given concurrent work by Hadid, Tschumi, Eisenman and Libeskind, who were busy shunting architectural representation into new realms of abstraction; by contrast the allure of Macdonald and Salter’s work was its sheer groundedness. Their designs, such as the 1983 proposal for Durham University’s Oriental Museum extension, romantically grew out of the earth, their organic forms almost indistinguishable from the landscape in which it was set.

In a way, what Zaha did for ‘The Peak’, Macdonald and Salter did for the dale – but the trajectories of these former AA tutors would diverge as surely as the branches on one of Macdonald and Salter’s exquisitely rendered oaks. Hadid’s flying slabs would strangely pick up on a zeitgeist and send her into the design stratosphere. But, aside from a few small built projects abroad, the other two would remain steadfastly with their feet in the academic clay of Vancouver and Cardiff respectively, their hand drawn visions left to inspire a new generation of students; delicate follies that remained a counterpoint to the production line of fashionable biophilic design.

But back in 2007, on the edge of Notting Hill, developer Crispin Kelly offered a long-owned, low risk, high value brownfield site to his former teacher Salter to realise his first UK project. Now complete, Walmer Yard – four homes clasped around a small courtyard like a clenched fist – has been 10 years in
gestation and construction, and is Salter transmuting the dark, earthy influences alluded to in his drawn work into three dimensions. And as happens with ‘total’ architecture, what’s amazing is how true to the spirit of the drawing the built reality actually is.

In fact, to call the development ‘four houses’ is to suggest a physical distinction, which experientially doesn’t seem to exist. In an uncanny way, Salter seems to have brought his palpably gothic fantasies to bear in all of them, the design ideologically drawn in the dust of spatial recollections, experiences, material memories. So the central courtyard is not just an entrance but a common nexus for Salter’s experimentation in acoustics and light. As any visitor will discover, its bench-set concrete walls define, we’re told, an ‘outdoor room’ – another surface being acted upon in his Möbius strip of a vision.

Salter claims its form derives from the desire to orientate the homes to the sun (the east house is set low to the ground) but the realisation dawns that if this is the case, it’s according to philosophical, Goethean theories of light rather than any Newtonian one. The houses might crave the southern aspect but their walls jostle about each other, a ‘pushmi-pullyu’ arrangement trying to balance the need for privacy with one for light. Salter saw a solution in his mechanical array of vertical oak shutters that populate the facades like giant snob screens, covering the windows and controlled by manual levers occupants can throw should they feel the need.

But it transpires the idea’s bigger than that; those shutters will offer acoustic damping too, as does the render Salter specified from Tube tunnel walls; the court’s woodblock floor too, he recalls, hushed the footfall of generations of Trinity College students in Dublin. The only conscious noise here is the one he induces from giant ‘cornice’ gutters; sculpted copper hoppers designed to gushingly warble to residents every time there’s a downpour. And no trickle vents here; light tufa stone panels set next to windows let the building breathe while the general mass of insulated birch shuttered concrete keeps it warm.

Once inside you discover, as with Goethe’s theory, that gloom is being considered as qualitatively as sunlight; in each house Salter will draw you to the dark end of the homes’ polished concrete interior party walls, only to turn you back around to address his concrete stair cores. Here you’re insinuated up into the light via reflections stolen off the black carbonised steel of his elliptical staircases, leather bound rope handrails acting as a form of soft rigging. Hold on to them - they’re guiding you through Salter’s topsy-turvy world where sunken kitchens of crafted furniture take on the look of St Jerome’s study and subterranean TV snugs are cossetted in woven willow reeds. And fed by dumbwaiters, living and dining are two floors up in the gods, following the 16th century country house precedent of corpulent diners who’d supper looking past the roof’s lead out to the estate. Clad in copper shingles, they’ll do so here in a weird iteration; polygonal timber ‘yurts’ lined in short straw walls, their black soaking up any light gleaned from the cast glass oculi puncturing the soffits as the Pleiades do the constellation of Taurus.

More curious still is the central ‘sleeping floor’ where orthogonality is thrown to the winds beyond its amber copper mesh curtains. Raised timber bedroom floors and earth coloured walls reference Japan but its parquet is, apparently, inspired as much by the Eurostar terminal as Scarpa’s Venice. Bathroom pods are amorphous, generated by plan position and the shapes of sanitary ware; their deep blue, green and red inner walls of painted steel offset by outer carbonised ones, heating pipes running between like ‘veins’ warming the metal skin. With shiny bluebottle green bespoke wardrobes set unsettlingly up from the floors and echoing the pods’ steel modesty doors, the effect’s as visceral and compelling as a butcher’s shop window gone bad; a feral Maison de Verre.

Read as a £22 million spec development, Walmer Yard flies in the face of any conventional idea of ‘buying into a lifestyle’; as an entity it’s too idiosyncratic and strange, the product of its maker’s febrile imagination. It’s labyrinthine and disorientating; deliberate – such as the 2.2m dado line that’s clung to throughout, forcing curved wired glass on the bathroom pods – but also contingent – any flawed concrete was just scabbled away and left, as was the bloom of welds. But with every element considered it is architecture that courts respect, and invariably reaction. Critically, it’s also a form that Salter has conjured from the sheer intensity of his penwork; a thing dug up, stitched and bolted together like Mary Shelley’s monster. It’s unsettling but even in its darkest corners, – and there’s a few – it’s alive, and kicking.