With a fresh approach to meanwhile use, IF_DO's workspace bolsters a community feeling the brunt of development in Rotherhithe 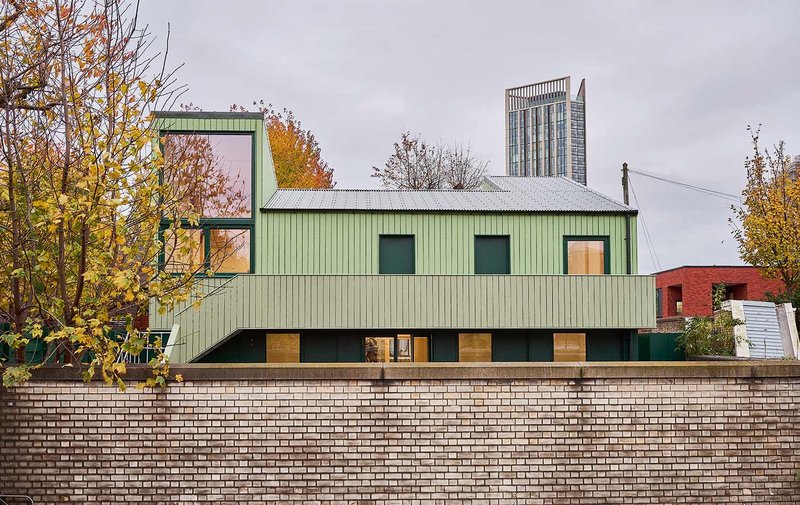 The rear elevation rises over the parapet of the Rotherhithe Tunnel. Credit: Mike Massaro

If the phrase ‘meanwhile use’ conjures up images of pop-up shops in shipping containers and street food stalls made of scaffolding poles, architect IF_DO’s temporary addition to a gritty bit of south London might come as a surprise. It’s a proper building for a start – albeit one designed to be relocated at the end of an 11-year lease on its present site.

Providing affordable workspace for small businesses, The Hithe sits comfortably among eclectic neighbours on Albion Street in Southwark: homes, shops, pubs, a school and a church. Its softwood cladding in shades of green picks up on oxidised copper roofs found thereabouts, and double-height dormers rise on two sides in friendly salutes to people exiting Rotherhithe station or approaching from nearby Canada Water, where a £3.3 billion regeneration scheme is remaking the former docks.

The encroachment of development has left a strong community feeling ‘squeezed and under-appreciated’, says IF_DO director Al Scott. That led Southwark Council to give it a meaningful say when considering the interim use of a small scrap of vacant land perched above an awesome piece of Edwardian civil engineering. The plot is on the corner of Albion Street and a pedestrian route to the Thames, and bounded on two sides by deep cuttings for the Rotherhithe Tunnel ­approach and a railway line. 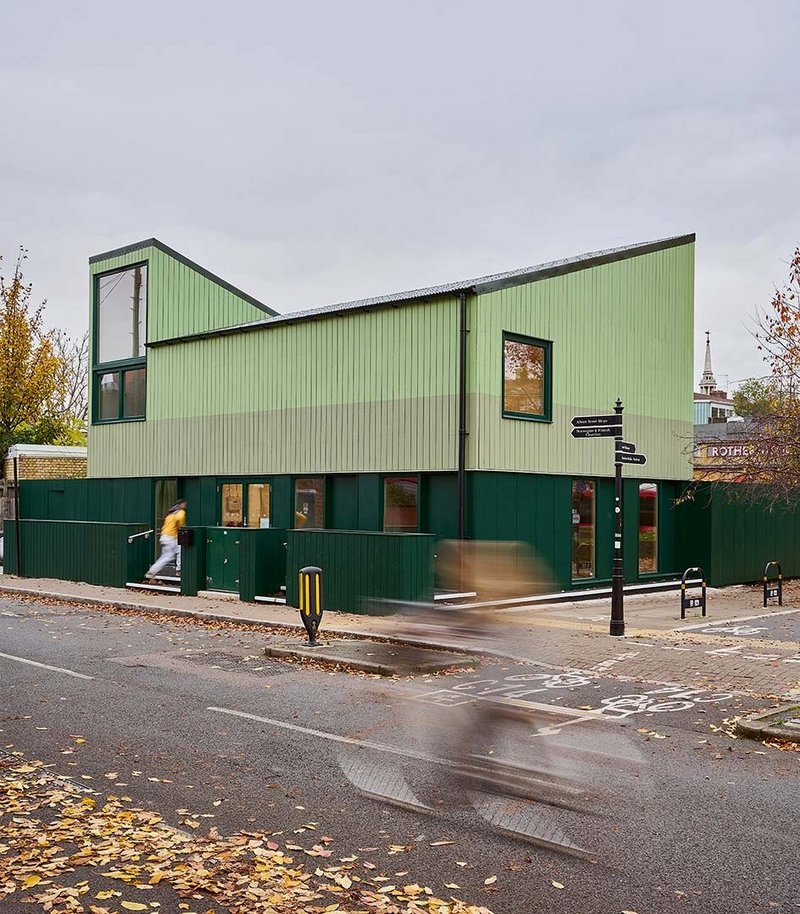 In partnership with Meanwhile Space, a social enterprise that brings temporarily redundant space into productive use, IF_DO was first appointed to conduct a feasibility study in which residents’ views were sought in myriad ways, from leafleting every building in the area to a stall at the street’s Christmas fair. ‘They didn’t want food and drink outlets that would compete with existing businesses,’ says IF_DO director Thomas Bryans, ‘and were explicit that they didn’t want something that looked unfinished or like another construction site.’

Having established a desire for micro-offices catering to start-ups ready to graduate from the kitchen table, the council tendered the project itself, selecting Meanwhile Space as developer and operator with IF_DO as its architect. The two produced a pragmatic response to the contingencies of the programme, the site and a tight budget (initial hopes were that the 200m² building would cost £240,000, though the final sum turned out to be £415,000), with some special features like the jaunty dormers that reflect The Hithe’s urban prominence and social significance.

The footprint was determined by existing strip foundations, left by a long-gone terrace of three houses. To ensure that the structure can be relocated economically, IF_DO worked with engineer Elliott Wood and fabricator Weber Industries to assemble it from relatively few prefabricated elements. The ground floor comprises five steel-framed modules and provides 10 tiny studios – just 6m² apiece – all accessed externally. Those at the rear enjoy privacy, while those at the front get a public ‘shop window’.

On my visit I met one new tenant selling skincare products and another giving sewing lessons; both were thrilled with their bijou premises, and the prospect of working in the company of others. They share a kitchen and toilets in a cruciform space in the middle, which also makes a through-route to a backyard where a proposed garden will be available for community use. (Also awaiting realisation is a ‘community vitrine’ in the fence – a display case for mini-exhibitions on local issues).

From the yard an external stair leads to the upper floor, formed of glulam beams and structural insulated panels, where there are two larger units – one occupied by Meanwhile Space itself. They are pretty spartan, with plastic cable conduit fixed to bare plaster and OSB, and little refinement in the detailing of bolted connections and brackets that allow for easy disassembly, but the chunky exposed timbers and huge windows make characterful, uplifting places to work. ‘To make something demountable zaps whatever slack you might have in the budget,’ says Scott. ‘It was difficult to justify those windows when we were value-engineering everything, but they do something important, acting as a beacon that draws people to Albion Street.’

The idea is that the economical building will pay for itself during its sojourn in Rotherhithe, after which Meanwhile Space will be left with a valuable asset which it can redeploy elsewhere or sell on, either as a whole or in pieces that can be recomposed in different ways.

For the operator, the project’s circular economy principles are also important. ‘When we started Meanwhile Space, one of the main drivers was to reuse buildings ­going to waste,’ says co-founding director Eddie Bridgeman. ‘Over time we became more ­focussed on affordability, but this renews our early emphasis on sustainability.’

While the logic is clear, The Hithe’s unusual status threw up various hurdles. Securing finance was challenging: what value does the structure have without ownership of the land beneath it? Bridgeman suggests that for similar projects, asset finance companies who would treat the building as a piece of equipment might be more receptive than conventional property lenders.

Building regulations are also tricky: waivers for temporary structures only apply to those intended to last less than two years, and when the building is relocated it will have to comply with whatever regulations are in operation then. Likewise, assumptions about the likely cost of reuse and the way the components might be reconfigured will only be proved in time.

‘This project is a prototype,’ says Bryans, ‘but we can only test the theory after a decade in use, so we are working with Meanwhile Space on another prototype for shorter-term use to validate the principle sooner.’ For Meanwhile Space, the successful delivery of the building and its enthusiastic local reception have already done much to prove the case, but the next iteration offers the opportunity to go further. ‘For me, the holy grail is for these buildings to operate off-grid,’ says Bridgeman. ‘With self-generated power and water storage, the range of potential sites is greatly increased.’

Learning from The Hithe might inform a new generation of durable, portable buildings for medium-term use, and prompt broader questions about how they should be better accommodated by regulation. On Albion Street, meanwhile, the new arrival has bedded in nicely; the timber decking and planters out front might give clues that it won’t be around forever, but it’s still more a placemaker than a placeholder. Outward-looking and expressive, the busy building brings new life to a forgotten corner and holds its own against the scale of its surroundings. With modest means, it sets a high benchmark for whatever comes next.