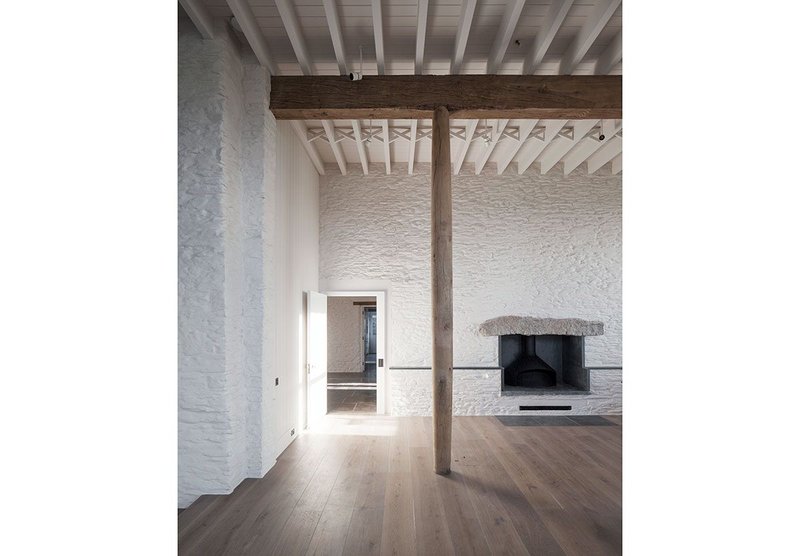 You can see right through the house from the living room to kitchen. A wide fireplace uses a gatepost for lintel and the hearthstone comes from the door of the house. Credit: Johan Dehlin

Before an ambrosial lunch from the garden – bright new potatoes, roast beetroot, nasturtium flowers atop salad, honey, figs – we step down onto the granite boulder towards the view and the sea. Drystone walls of limestone bed the grounds into the land, an oval pond rests in a bowl in the gardens and a new ha ha invisibly separates garden and grazing. Explore further and you can slip through a snicket in the wall and find a willow thicket to lose yourself in. Here is the commitment and energy for the land and place that drew practice 6a to the couple who owned the house when they were introduced by designer and plantsman Dan Pearson. The Coastal House, now shortlisted for the RIBA’s House of the Year, was the last major piece in reworking this farm.

The fruit and vegetables, walls and willows all found their genesis more than 10 years ago on works that started with fixing the land drainage and went on to move the cows to a new, larger barn across the road. The concrete farmyard was dug up, and to Pearson’s design became a miraculously abundant and beautiful garden in the lee of the farmhouse. Stephanie Macdonald from 6a saw this in its early stages, with the family in the cold, leaky house alongside, small kitchens and multiple stairs leading to tight rooms in an uncomfortable plan disconnected from the garden by the raised plinth it had been built on. The practice wasn’t looking for work on houses, it knew it needed to work at a different scale and with more of a social programme. But this collaboration was impossible to turn down.

The practice wasn’t looking for work on houses. But this collaboration was impossible to turn down

Given the state of the undistinguished turn of the early 20th century house with odd additions, and systems failing, the first thought was to knock it down and start again with a design level with the garden rather than stuck up on its plinth. This thinking took 6a as far as planning. But it didn’t seem quite right and the clients’ attachment to the farmhouse, and to the sense of time and continuity it represented, made them think again. It became a radical retrofit.

The house stayed. Or at least its outer walls did, warmly lined with insulation and reclad in reclaimed slate. This left the internal walls free to be stripped right back, a white slurry finish uniting the rather rubbly stone – and its interspersed horizontal timber levellers – to leave texture and topography exposed. The convoluted rooms of the extension have been made part of the house and one of the four chimney breasts substituted for a top-lit staircase that opens up the centre of the house.

What made all this possible, within the brief, was using the void under the floors. The plinth has donated its volume to the ground floor rooms and the house now connects with ground level on three sides, on the fourth a terrace faces out to sea. There is now a concrete slab plumbed with underfloor heating. Where the floor joists rested a slim ledge now runs around the living room. Elongated windows maintain a comfortable scale with French doors opening on all sides to the garden through the deep walls; above them clear panes of glass look to the sky. In the evening the black eyes of the darkness can be shut out with simple shutters, though you are more likely to find the inhabitants on the new verandah garlanded with blankets, catching the last light of the sun.

I would like to describe each room to you, the way the light falls and the air moves, the trees framed and moments created, the kitchen’s deep external window seats and its relationship with the courtyard, how the master bedroom extends up into the roof space, just the right amount. But two spaces in particular show how the reworking has grounded and grown the house, imbuing it with a sense of history, despite the light and modern living. The first is the hall. As you enter your consciousness is nudged by church naves and Tudor manor house (and its arts and crafts reinventions). The compression of the staircase above is just perceptible but your eyes are on the oak tree ahead while taking in the dark monastic refectory table. A step inside reveals the light from the roof three floors above and the generous oak staircase leading up to it, before peripheral vision asserts itself, unveiling spaces beyond the rooms – a sheltered courty ard to one side and, stretching the view, the sea horizon over the fields.The openness in the heart of the plan captures the landscape for the house. But looking up into the house you see that it’s not all about the view out; it is also precious in itself. This shows in details like the smooth handrail of curving elm and spindle-shaped oak balusters that dance up the staircase; set alternately at two degrees, the slender verticals render larger bracing unnecessary.

The living room has the sense of a mediaeval hall about it with a large hearth and minstrels’ gallery mezzanine. Here the textures  of the whitewashed stone and juxtaposed shutters on the long windows are most pronounced. Timber downstands and herringbone strutting in the ceiling are exposed and an oak column (also shaved to a spindle) inhabits this large (78m2) space with a notional divide. At the same time it has strong echoes of the original cottage Kettle’s Yard gallery – ledges set with treasured found objects, naïve paintings and the time worn delicacy and slim spindles of primitive chairs. The room steps down under the mezzanine for an evening snug on the sunset side of the house. Here there is no need to talk of a ‘material palette’, onto simplicity fragments of the land and its past have been fused, ubiquitous veined local limestone as doorstep, an old gate post as fireplace lintel, a hearthstone below once sat at the farmhouse’s front door.

This house is remarkable in many ways: for its extraordinary coastal site, for the way the land informs and enriches it and for the garden as a way of life, for the radical upgrading of the fabric and the way it has been used to create very different spaces, for the masterly handling of the materials and details, and for the artistry with which it is lived in. It is impossible to separate these out from the architecture, and that is how it should be.