When Shaun O’Brien of ROAR Architects went to inspect this house in London’s Kentish Town he found a deserted room two feet deep in post and a mish mash of landings and half landings, with Georgian rooms awkwardly chopped into bedsits. Other bidders to buy this long-empty women’s refuge were scarce; one planned to knock it down and start again.

The 34 year old O’Brien had reworked houses before, clubbing up with family and friends to develop properties in his 20s as a route to getting his own home. This one was also close to home, a commission from an uncle and aunt for two flats for their adult children. But the scale was different. Only the brick shell of the original would remain in the completed revamp, and that sliced into with enlarged windows and extended with a new storey behind the parapet. 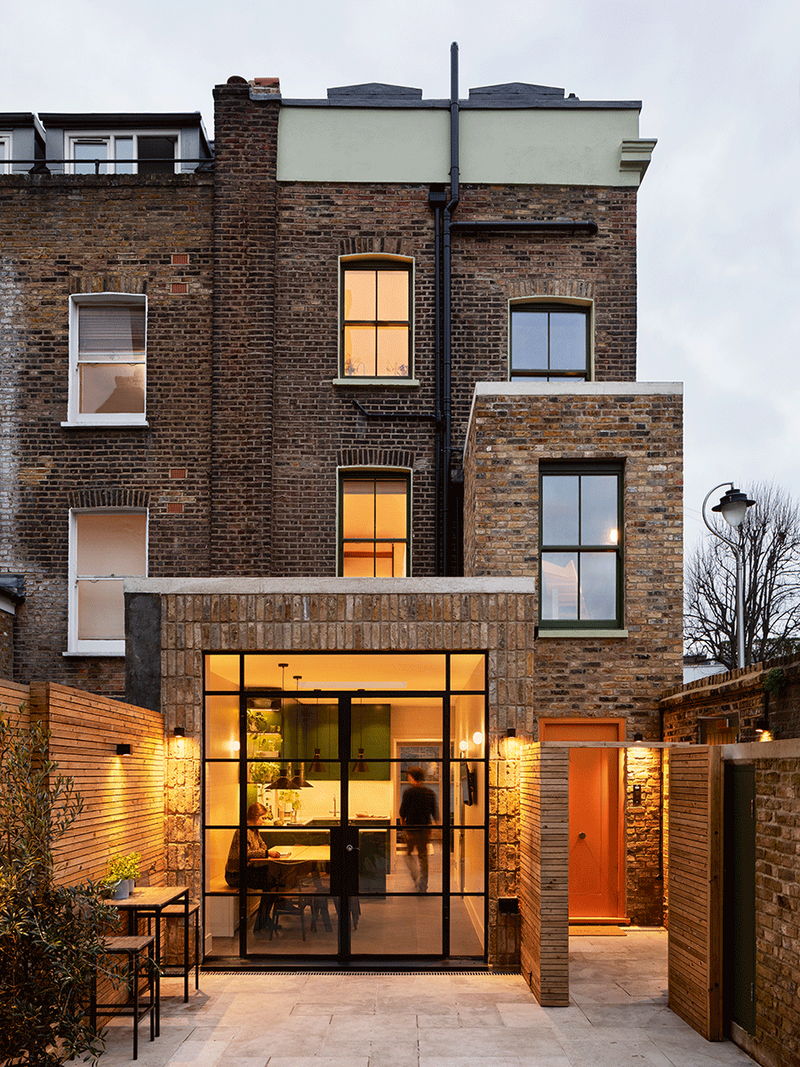 From the back garden you can see the lower flat with its Crittall screen and, to the right, the side door entrance to the upper flat. Credit: Ollie Hammick

The first job though was to establish the ­paperwork for the building, which was missing a use class. Once it was established it was just one house the studio was able to apply for a single planning permission and remove the closet wing that was moving away from the house with visible cracking, facade work and extension. Only after this was through and the work was under way did ROAR apply to split the building into two homes.

After the auction O’Brien spent a couple of months camping out in the house, as his own home was completed. That was before the clear-up of nappies and rubbish in the front garden, and graffiti on the side walls, while the rooms were still dark from an oversized tree of heaven in the modest back garden. ‘It gave me a chance to see how crap the house was,’ he says, adding, ‘Terrible ­circulation.’

Now it looks like one of the most handsome houses on a well heeled street. The facade, likely rebuilt post-war, was defined by cement render and oddly mean windows. Stuccoed, it holds its own: the base of the windows have been pulled down 60mm to match the rest of the street and bring in extra light, with new header and keystone details in Roman cement and rendered ­reveals. ‘There was previously no detail, we didn’t want to leave it as ugly,’ says O’Brien. Of course, that is just the outside – it was also insulated internally and the entire ground floor damp-proofed.

It is a neat jigsaw of circulation with two independent entrances (it was important the flats could be split in the future), garden access and three flights of stairs. There are moments where the design really sings and a joy in seeing how ROAR has expressed the very different character of the two homes.

In the lower flat there is a sense of Georgian proportions with boutique hotel plushness. Looking over the small garden, Crittall-framed windows add surprising character and their frames avoid the bleed of space from the relatively narrow 3.3m wide kitchen and dining room. Green cupboards bring a punch of colour to the darkest part of the kitchen, overlooking the dining space. Space is well used, with a laundry cupboard plus a guest toilet subtly appropriating the space under the stairs of the flat above. In the same way, the second bedroom was designed for a built-in bed that sits partly over the canted ceiling above the stairs. But it is the bathroom that we have really come upstairs to see, a sinuous insertion into the main bedroom, the dark grey opening to the warmth of orange and terrazzo-style porcelain surfaces. It has presence but the space it takes is finely judged, leaving a comfortable niche outside for a small writing desk.

The upstairs flat is a bit of a climb, up two storeys, but specially-made open tread ply stairs, dark walls and windows and a large rooflight make it a welcome journey. Halfway up (over the downstairs loo) a large display or storage shelf with mannequin hint at the fashion interests of its inhabitant. ROAR has dealt with the constraints of fire compartmentalisation at the top of the stairs with a large panel of glass, so the stair and adjoining kitchen share the space visually. The kitchen and living space are light and airy, the ply kitchen with its stowaway larder-cum-workspace showing the versatility of ROAR’s interior skills. It feels younger and lighter as it flows into the living space and it is clear this is very much a home.

The planning constraints tell most on the upper flat, a refusal for a small roof terrace, the need to build the extended upper floor behind the parapet – unfortunately a very high one which obscures the green view unless you are on your tiptoes.

But as a rescue and re-use mission it goes beyond gentrification to make the building work really hard for a whole family and shows a range of developer and architectural skills that should stand ROAR in good stead.