Once scruffy and collapsing, Creek Cottage on the Lincolnshire coast has been transformed into an austerely beautiful holiday home that merges with the textures of its setting 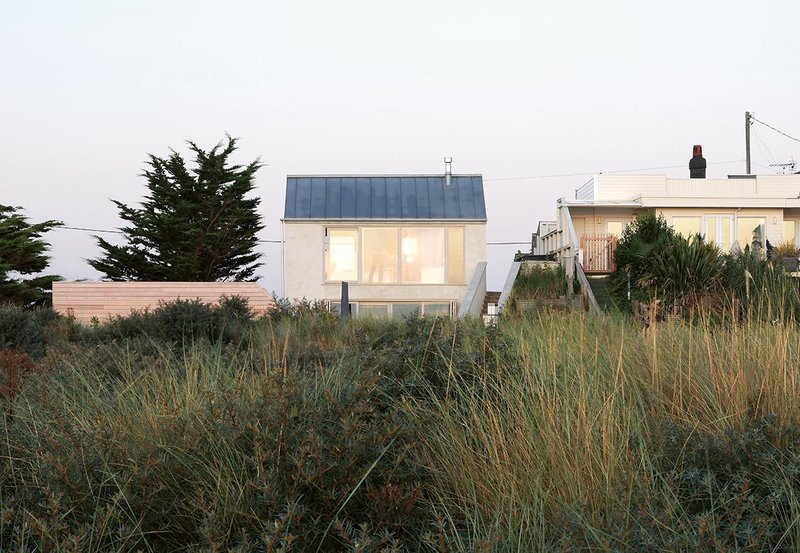 The front of Creek Cottage faces the beach, the new larch sun terrace to the left. Credit: David Grandorge

You wouldn’t know from the images of this house that it is a refurbishment project. Unusually during a time of ‘maximising’ everything, it has not been added to or extended in any way. Not to wash the original budget too thinly, a 1960s/70s home has been amended to modern needs and emerges to demonstrate a different way of dwelling – at least for a week at a time.

Creek Cottage is a holiday home and holiday let sleeping six, located on the top of the dunes looking out to the North Sea, 9km north of Skegness in Lincolnshire. It is part of a hamlet of about 30 houses called Anderby Creek that developed organically after the Second World War as a retreat for former soldiers and their families. The eponymous creek bank falls away to the back of the southern boundary of the site. The beach is vast, empty and wild.

The clients, a couple and their children from Harrogate, had been spending a lot of time in Anderby Creek and when a cottage came up for sale decided to buy it. The building was in a bad state of repair. It suffered from subsidence, had previously been underpinned and was buckling under the weight of its concrete tile roof. The day before they made their offer, its concrete balconies facing the sea fell off. The render was flaking too, and like many of its neighbours it was an example of the botched building that characterises the area.

It was all ‘a bit bodged, very DIY, hotchpotch but charming in its own right,’ says architect Jonathan Hendry, founding director of local practice Jonathan Hendry Architects. ‘There was evidence of years of holiday projects laid on top of each other.’

The client came across the firm through the Beach Hut (2017) and Beach Chalet (2012) it had designed along the coast nearby. These were the start of a bigger conversation about dwelling. Because the house is in a major flood zone it is almost impossible to build new, so the project was always about refurbishing the ground floor garage and two-bed layout on the first floor. Hendry was given a free hand to lead the process and explore the potential of the scheme

The main move was to convert the ground floor into living space, connecting the previously separate levels by inserting an internal stair in the beam and block floor, as well as clearing the walls upstairs to start afresh. Two openings on the beach frontage were extended, injecting light, air and openness. Hendry wanted to make the building feel part of its grassy, sandy, windy setting. The beach is brought right up to the house, into the fabric of its walls, textures and surfaces, with the pearlescent sea in its interior tiles and the natural simplicity of its furnishing reflecting the sparse landscape outside the window. The idea was for people who stay there to question how they live when they return home. There is no sense of the previous building now.

Counterintuitively, the principal approach to the house is from the beach. Chestnut pale fencing defines the boundary, allow­ing the drift of sand and grass between inhabited and uninhabited. A new enclosed larch deck rises to the front left of the garden, acting as a sun terrace, windbreak for sun loungers and viewing platform to see the sea. The timber is treated with a product that accelerates the weathering process, meaning it skips the ‘pine-looking phase’ as Hendry explains. Below is a store for outdoor equipment.

The house has been re-rendered using a lime mix containing recycled clear and green glass particles that give the exterior a coarse glimmering texture and intriguing variety appropriate to the scene. The enlarged, not quite full-width glazed opening on the ground floor is now the main entrance, a coconut mat and metal grate positioned ready for visitors. Upstairs a door slides along in the main bedroom to reveal a Juliette balcony. The window frames are made from Accoya that comes with a 30-year warranty.

‘They have been stained with a grey oil that picks up the grain,’ says Hendry. ‘The exposed location means materials are particularly important.’

At ground level the windows have external concertina security shutters that sit flush with the render when closed, aluminium on the outside and lined with more Accoya for cosiness inside. The concrete tile roof has been replaced by standing seam zinc to ensure an extra tight envelope for when the property spends long periods closed up out of season. On the terrace, the external stair treads and risers have been retained to the former main entrance that is still there on the side elevation at first floor, but the balustrades have been made more solid and robust. Power floated concrete means the terrace is easy enough to sweep clean of the sand that blows onto it. A new barbecue and firepit are designed to make the most of nights outdoors listening to the waves under the stars. Aluminium guttering and downpipes give an additional watery shimmer to the facade. The table and benches were designed by Jonathan Hendry Architects from large chunks of larch, treated with the same weathering accelerant as the terrace.

Inside, this desire for natural materials extends to every detail. ‘The client kept sending pictures of furniture he had in storage,’ explains Hendry, ‘but none of it seemed quite to fit. In the end we were commissioned to specify everything down to the salt and pepper mills and soft furnishings. The only item the client didn’t order from our list of recommendations was the coffee machine because his brother-in-law works in that area. It was unexpected.’

From that terrace, you enter straight into the kitchen/dining room, which is fitted out in a ‘back-to-basics’ manner that, although Hendry says he is a bit cut off from what’s going on architecturally in the world, is indisputably part of a growing movement, reflected by companies like Another Country that promote the relationship of things and nature. It is designed to bring about a slower living pace for occupants to recharge – the traditional Aga kettle on top of the wood burning stove. The walls are made of clay plaster, again bringing outdoor textures in – here, what Hendry describes as ’before a violet’ tone. 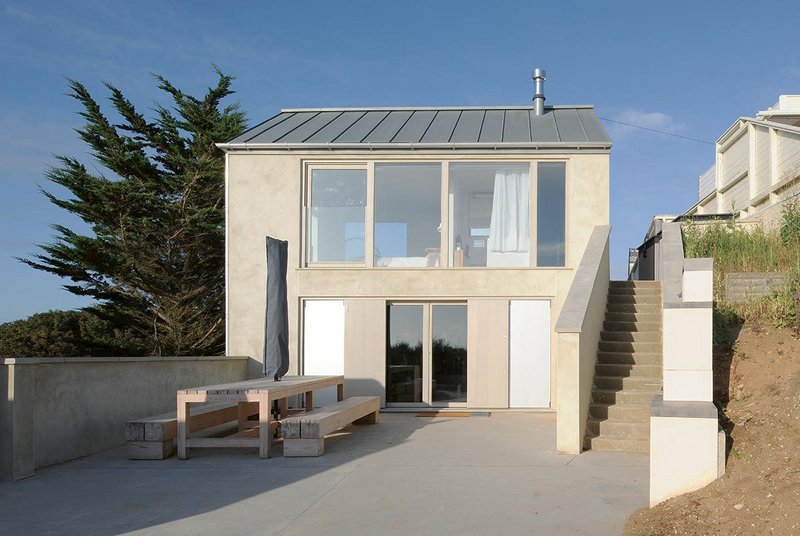 The house reuses what was there but roof, render, openings and terrace are updated. Credit: David Grandorge

‘We didn’t want materials that needed to be decorated, or to go down the timber floors and white painted walls route,’ says Hendry. ‘This material has a lot of variety, texture, it’s polished so some areas seem to have movement in them. It is also hand-crafted.’

The matt black fronted kitchen is bespoke too, designed using colour-through MDF called Valchromet and elevated off the ground in case of flooding. The worktop is Caesarstone. Behind the kitchen is a boot/changing room with a shower on one side and  WC on the other. This leads through to an snug space lined in plywood, illuminated around the ceiling by LED strip lighting. A day bed here means it can double as another sleeping area.

Back in the kitchen a blue steel milled stair to the right of the entrance leads to the first floor, which is treated differently. In the stairwell, clay gives way to lime plaster. In the centre of the upstairs plan is a glass box twin shower room with a timber slat platform crossing the corridor outside. It all feels very Japanese onsen/ryokan, blended with a bit of futurism in the sliding doors. Beyond is a bunk room and second bedroom, while at the front is the master bedroom and the en-suite where you can finally enjoy those pearlescent tiles and views of the sea itself.