Evans Vettori’s four new houses draw on the local industrial revolution heritage, but there’s nothing run of the mill about them 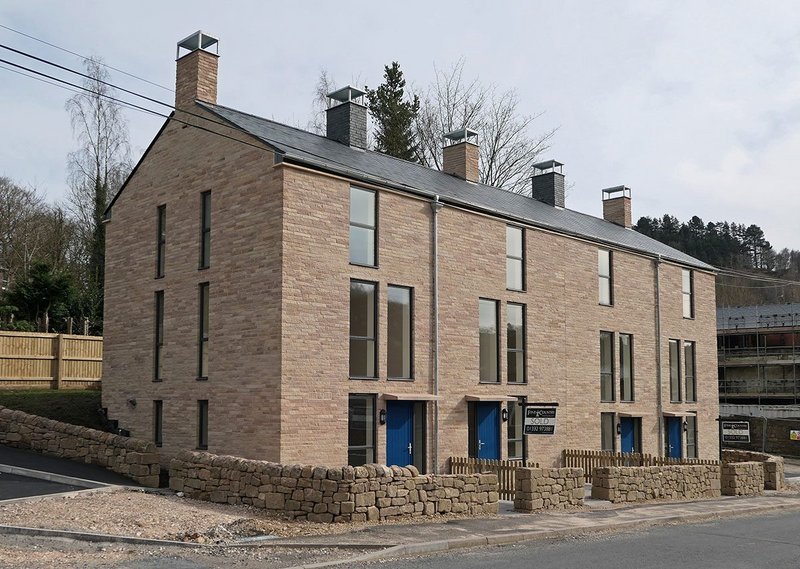 One of the features of the Derwent Valley Mills World Heritage site, running from Derby north almost to Matlock, is the worker housing built from the 18th century onwards to attract labour to what could be quite small and out-of-the-way places, determined mainly by the availability of water power for the cotton-spinning and hosiery-making machinery. The housing varied in detail from mill owner to mill owner but a common terraced type emerged that can be seen in all the mill towns up the valley: Darley Abbey, Milford, Belper, Cromford, Lea Mills. In the last of these, Matlock-based architect Evans Vettori has revisited the typology for today’s housing.

Richard Arkwright built the first such water-powered mill in nearby Cromford in 1771: that was where the Industrial Revolution began.  His business partner Jedediah Strutt soon went solo with his own mill in Belper in 1778. But John Smedley and Peter Nightingale (noted industrial entrepreneur and great-great uncle of local girl Florence) weren’t far behind, setting up Lea Mills in 1784 amid woodland – still there – on a tributary of the Derwent. The factory is still making its ‘By Royal Appointment’ upmarket knitwear, and at present also PPE garments for health and care workers. As the other mills in the valley no longer make things, it claims to be the oldest mill in continuous operation in the world.

Modern manufacturing methods meant the complex had shrunk however, rationalising its operations to the western side of the road that bisects the works. The redundant east side needed a new use. Evans Vettori developed a masterplan to turn it to housing in a mix of conversion and new build. The new-build elements are two new housing terraces: the first has just been completed.

This I went to see, solo, on the last weekend before lockdown. The builders had only just tidied up and left, the houses had not yet been occupied, with ‘For Sale’ signs on two of them. It’s just a little terrace of four houses in local rough-finished stone, cut to the thickness of bricks, in a little rural/industrial valley. However it represents quite a bit of research by EV co-director Dan Greenway, who himself lives in the mill worker streets in Belper.

He found that Belper’s famous Long Row, a stone-paved street of Strutt worker housing descending the hillside towards the mills, has an ingenious floorplan arrangement in which the stairwells of two adjacent houses interlock. He borrowed this idea, along with the typical three-storey tall narrow proportions with the top floor windows close up against the eaves, for the new Lea Mills housing.  For further historic reference he had also previously restored an existing short original terrace on the working western side of the John Smedley complex, intended for social rent for the mill’s employees in traditional fashion.

From the front, all four new houses look identical. In fact the central pair are slightly larger at ground floor level – which becomes basement level at the back where they are cut into the slope. This is because whereas the end houses have side windows to light their kitchen/diners, this central pair cannot. Instead their ground floors slide a little further back beyond the rear wall of the terrace, allowing daylight to be brought down through a glazed section at rear ground level.

These new homes are not intended as housing for millworkers, as the social housing element is on the restored far side of the complex (this required agreement between two local authorities, the border between them being the millstream). Asking prices start at £260,000.  As this careful residential development is built out, it will retain the integrity of the previously derelict side of this important mill complex and bring domestic life to this part of the village. Evans Vettori took the project to planning permission working directly for the mill owners, who then sold the site on to housebuilders who retained them for the building phase. This meant, for instance, that the architects could successfully argue to keep the visually important chimneys, which are designed and built to be used for gas boiler flues, soil stack ventilation and bathroom extract vents.

From an architectural point of view, the houses are deceptively simple but they pull off something that is very difficult to achieve: an intelligent modern reinterpretation of a historic typology, in a World Heritage Site, under the eye of Historic England. No repro here. Many of the original mill houses are very tightly planned indeed, low-ceilinged, precipitously-staired and often dark, with front doors opening directly into their living rooms. Fine if you like that kind of thing (I’m too tall for them) and they have mostly now been gentrified.

These new houses at Lea Mills manage to make all the right design moves and references for this setting while updating space, light and accessibility. I walked up into the woods overlooking the mills and looked back across the valley. It took a while to spot the new houses, which is as it should be. This is good honest background architecture.