In the years  before the First World War the typographer and sculptor Eric Gill and graphic designer Edward Johnston, (best known for his sans serif typeface for London Underground) moved to Ditchling, a rural village on the Sussex Downs above Brighton. Influenced by the teachings of William Morris, they formed a loose community with other artists and craftspeople, including printer and poet Hilary Pepler, poet and artist David Jones, hand weaver Ethel Mairet and silversmith Dunstan Pruden. The community eventually dwindled but the tradition of creativity remained and in 1985 a small museum, celebrating the work of its famous artistic residents, was set up in Ditchling’s Victorian former village school.

By 2010 the museum had deteriorated: obscure and unseen, it was hidden from the village green by a rickety fence and could be reached only by a path through the cemetery. The village green itself had been a farmyard until the 1950s and two agricultural buildings still stood on it; one had been converted into the village hall and the other – a listed 18th century cart lodge – was neglected and deteriorating. 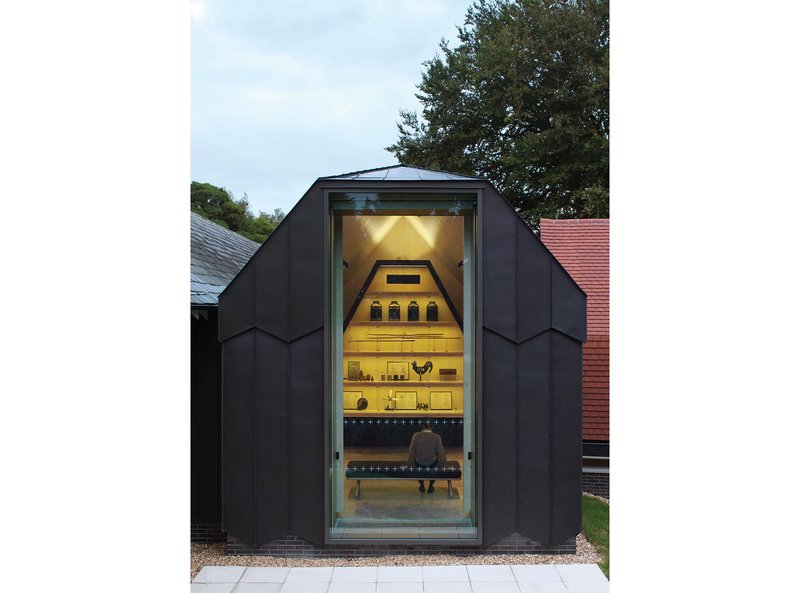 Today the museum has been updated and revitalised by Adam Richards Architects. One of the keys to its success is the incorporation into the new plan of the cart lodge, which has been converted into a new entrance to allow the museum to open directly onto the village green and is linked to the original museum, now refurbished, by two new buildings. The architect’s brief expanded to include exhibition design, so that the collection and buildings could be integrated and exhibits related to the places where they were made. As the architect explains: ‘We worked with the museum’s disparate range of existing buildings to find thoughtful, innovative solutions to upgrading their fabric and functions while highlighting their original aesthetics. We also explored the poetic possibilities opened up by designing new buildings that not only complement the old, but also enhance our understanding of existing buildings by reflecting the principles of their construction using contemporary technology’. Timber played a central role in the restoration of the original buildings and the new structure. Original oak trusses were repaired and exposed, the galleries floored with oak boards and the walls of the restored schoolroom were lined with vertical matchboarding, to reflect the original cladding.

Cross-laminated timber (CLT) is used in the new buildings, chosen for its economy, ability to provide unobstructed large volumes and its structural ‘honesty’. The thickness and size of the panels are celebrated and detailed to express the structural forces. 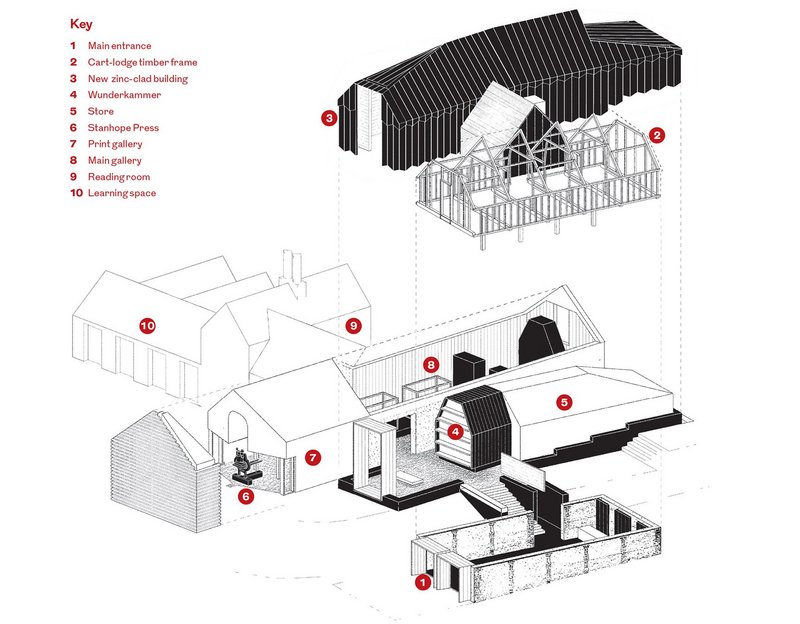 The cart lodge and new buildings

Though in poor condition, the cart lodge – oak trusses, brick/flint walls and an earth floor – has been restored to house a café, shop, and a new entrance, protected by a pair of timber portals resembling a pair of open barn doors.

The roof was taken off and a plywood box placed over the oak stick frame structure to stabilise it. The oak frame was retained as far as possible, with reclaimed or new seasoned oak members used where necessary.

Walls were insulated and horizontally clad with oak (feather-edge) weatherboarding to retain the original exterior of the building. Breathable technology was used, including wall and roof membranes and a new Limecrete slab floor. Internal fittings – ticket desk, café bar and shop display units – are all made from off-cuts of CLT; their setting, beneath an exposed oak canopy, is an example of old and new timber technology encountered side-by-side.

A new building links the cart lodge, which is set at village green level, to the higher main museum, following the slope of the bank and containing both stairs and a lift. From the stairs visitors enter another new building, the Introductory Room. A meditative space, this has a 4m high window overlooking the village green and pond to one side, while on the other a contemporary version of a cabinet of curiosities acts as an introduction to the collection, the village and its history. The cabinet and its shelves are all made of CLT. The rest of the building contains a new state-of-the-art collection store and WCs.

Both the Link and Introductory Rooms are constructed of CLT panels clad with hand-made tiles and black zinc sheet, supported on a base of glazed black brick. This concept – a timber structure on a masonry base – is a contemporary re-interpretation of the cart lodge structure. CLT panels are exposed internally and treated with a white dye; this, combined with the black bricks and black zinc, alludes to the black and white print collections of the museum. Every opening in the CLT reveals its thickness, while hand-chamfered edges delineate each panel.

From the Introductory Room, the entrance to the main galleries – former classrooms of the village school – is clear; the engineered timber walls peel back like a proscenium arch to reveal the flint outer walls of the old school building, which have been given a light lime wash. The matchboard-lined character of the former classrooms has been retained, while high levels of environmental control have been introduced. Specially designed display cases of works by Eric Gill dominate the centre of the main galleries. Other displays use the stories of different makers and artists to build up a picture of the individuals and their work. The culmination of the museum is a new gallery which houses the Stanhope Press and associated printed works on paper.

Strengthened floors of the galleries were covered with new solid oak boards; walls and ceilings were stripped back before being insulated and re-lined with ply and matchboarding to conceal services. Beyond the galleries, a warren of small rooms within the old school has been opened up to create a new multi-functional learning space, offices, WCs and kitchenette. The former headmaster’s house has been transformed into a double-height reading room. 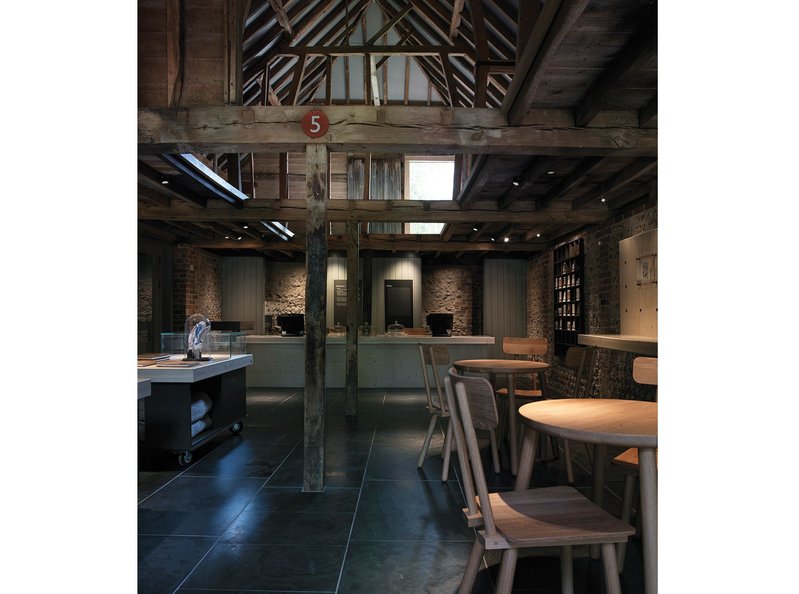 Restored original timbers in the café.

The grain direction, jointing and finish of the CLT panels, manufactured by KLH UK, were particularly carefully considered as the structure is exposed internally. CLT planks were made of kiln-dried finger-jointed spruce, manufactured and cut to size in Austria. The timber comes from sustainably managed forests and the adhesive used between panels is solvent and formaldehyde free. All timber on the project came with an FSC Chain of Custody Certificate.