In the 1840s privileged families began spending the summer in the Highlands, immersing themselves in leisure activities such as shooting, fishing, exploring and entertaining family and friends. This fashion came to be known as the ‘Highland Season’. It was initiated by the romantic writings of Walter Scott, and fuelled by the patronage of Queen Victoria and Prince Albert, reaching its zenith around 1880.

The building frenzy that accompanied this seasonal influx of visitors produced a new type, the Highland retreat, which soon gained conspicuous presence on the barren hillsides and isolated loch sides. Its accommodation was designed explicitly for entertaining groups – something between a country house and a shooting bothy. Such commissions also provided a vehicle for exploring the ‘true’ nature of Highland architecture. We have inherited the splendid results of this heady period of building; from Scott’s own baronial version of the Gothic Revival at Abbotsford (1814), through the fairy tale turreted excesses of John Rhind’s Ardverikie House (1878), to the simple neo-medieval restraint of Robert Lorimer’s Ardkinglas House (1906). 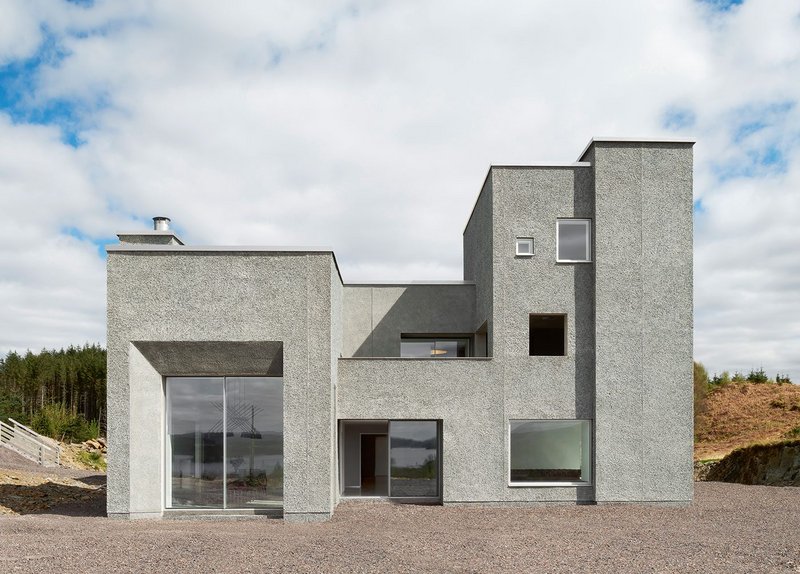 Denizen Works, which recently completed Hundred Acre Wood, a 650m² Highland retreat near Loch Awe, Argyll and Bute, appears on paper to be particularly suitable to interpret this uniquely Highland typology. Murray Kerr, who trained at the Mackintosh School of Architecture, founded the London-based practice in 2011 with an explicit interest in making architecture that was rooted in place. The practice had already completed several Highlands and Islands projects, notably the RIBA Stephen Lawrence Prize-winning House No 7, Tiree (2013), and the recently completed Mannal House (2022).

The client for this new retreat was a couple, Glasgow-based David and Margaret, who had bought 40ha of ex-Forestry Commission woodland on a hillside above Loch Awe on which to build a seven-bedroomed retreat for their extended family, and to reinstate the native woodland. After eight years of collaboration with Denizen Works the first phase of the project – the main building – is now complete, to be followed later by a garage, a games room and extensive replanting of the estate.

From the main road the house is approached via a forestry track through the wooded hillside. Visiting to review the building, it felt an isolated and romantic place, well hidden from the tourist gaze. An old shepherds’ hut on wheels soon marked a right turn, quickly followed by the first sighting of the retreat – a sequence akin to a picturesque ‘reveal’.

There it was, a bold accretion of heavy defensive forms rising resolutely from the wild landscape in defiance of the Highland weather. This brut yet strangely picturesque composition evoked an eclectic range of sources, from medieval tower houses and castles (including the nearby 15th century Kilchurn Castle) to Mackintosh’s Hill House, Alvar Aalto’s Maison Louis Carré and Charles Moore’s Sea Ranch. The whole was finished in harling, a tough weather-resistant aggregate finish commonly used in Scotland. But this was no ordinary harling. The Glasglo aggregate, made from recycled TV screens, glinted in direct sunlight giving the building a magical quality.

A tall over-scaled opening, with deep chamfered edges finished in a more granular aggregate, beckoned the way from the car to the entrance. A wide, heavy door opened into an intimate lobby, with boot room attached, in which to shed the layers of clothing associated with being ‘in’ the Highland landscape.

The lobby opens to a vast double-height hall – the literal and symbolic heart of the house. Oversized reception space has always been an important feature in a typology intended primarily for communal activities; Phillip Webb’s Arisaig House (1864) is a prime example. Here the architect drew additional inspiration from the sculptures of Eduardo Chillida, conceiving the building form as a hollowed out solid, with the hall at its core. This central space, which was originally designed to house an 5.5m Christmas tree, works for orientation, activity, circulation and access, and has a theatrical quality akin to the three-storey circulation space in Le Corbusier’s Maison La Roche.

There it was, a bold accretion of heavy defensive forms rising resolutely from the wild landscape 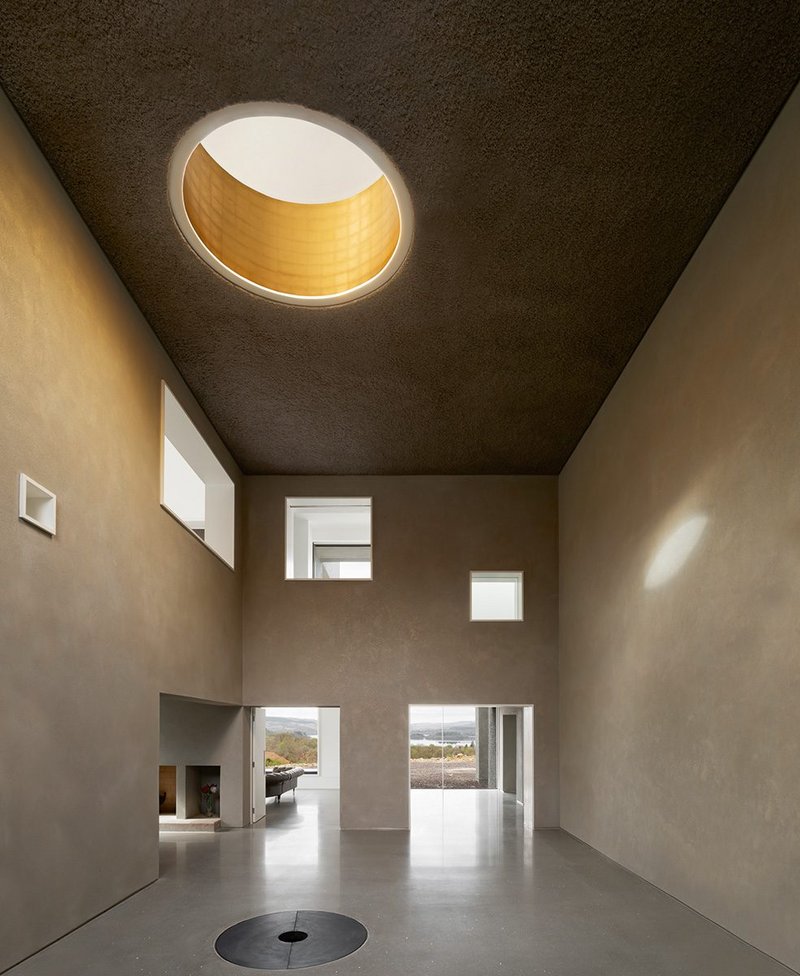 Tantalising glimpses of sublime views over Loch Awe drew one through the hall to the principal rooms – the dining room and living room. Like the hall, the dining room felt daringly simple, containing just the essential elements for the ritual of communal eating; a 4m-long table, 16 chairs, an antler-like over-table light and a tiled hearth to bring a primal warmth. In a manner akin to Adolf Loos’ concept of Raumplan, the vaulted space appeared to have been designed around the dining ritual. Unlike modern open-plan living, the kitchen is in a separate room accessed through a tiny stainless steel-lined pantry. There, again, ritual appears to have dictated the design: a whole wall of stainless steel panels forms the backdrop to an enormous Aga – both the symbolic and practical focus.

Across a lobby from the dining room was the more intimate living room. Here a vast curved Chesterfield sofa faced a hearth that is carved poché-like into a thickened wall, flanked by two large windows with sublime views over Loch Awe. The ubiquitous watching of television seemed to have been superseded by the draw of the natural elements; earth, air, fire and water.

Back in the lobby, a top-lit staircase with a semi-circular tower-like landing leads to a first-floor gallery giving views down into the hall and provides access to further public and private rooms. A left turn took me past Margaret’s private realm – the shoe room – to the library.

The atmosphere in this intimately scaled space was at once warm, sensual and studied. The room is lined on two walls with dark timber floor-to-ceiling bookshelves, with a large window facing the loch on the third side. The window seat and ceiling were finished in opulent purple leather procured from a firm local to the client’s Glasgow house. Playfully, a small window connects the library to the dining room below, and a secret door gives access to a private study. Here were more Loosian overtones – this time the simple use of rich, unadorned materials.

After exploring the first floor bedroom wing, with its simple but functional rooms and exuberant copper-themed bathrooms, and climbing the fairytale tower staircase to reach the cinema/reading room, my final destination was the roof terrace. Set between the dining room and living room below, the external space, with its primitive hut-like hearth, reconnects with the external world. Feeling a little like the wanderer in Caspar David Friedrich’s famous painting, I was reminded that the Highland landscape should not be viewed just as a picture but needs to be experienced corporeally to be fully appreciated.

Driving back home I did wonder how the spare aesthetic of Hundred Acre Wood would be received by those with no prior knowledge of its antecedents. Regardless, this reimagining of the Highland retreat provides a brave and intriguing demonstration of the way that primary lessons from past sources, both typological and stylistic, can be filtered through an unashamedly modernist lens to create an architecture that connects meaningfully to place.

Helena Webster is an architect and academic