Its Bedlam days as an asylum for the insane may be ancient Victorian history for the Imperial War Museum London’s building, but only a couple of years ago a holiday visit here stamped the impression of madness on me: cluttered and confusing, up stairs, down lifts… Now IWM, as it styles itself, has been given the Foster treatment: big spaces, robust materials, logical circulation. Well almost. The opening of the £40 million first phase of work still leaves much to be done. But, says project director Michael Jones, this is the pebble dropped into the pond that allows such future ripples to take place, without closing the museum.

But first what has been done. The main level has been returned to the ground floor and is starting to stretch out into the park with new views to one side. The first floor has been removed to allow this, which starts to fix the confusing circulation. You still enter at the first floor through the grand portico (a basement vault entrance at ground level is part of a later phase), but the beauty of this first-floor entrance is that you can pause, on the (temporary) staircase and appreciate being part of the opened up atrium, along with the Harrier and the Spitfire, hung from the ceiling as in all good war and aircraft museums. To the sides, a human torpedo and Land Rover butt into the space. This relationship between major objects and galleries was one the museum was keen to work harder.

In fact the whole museum had to work a lot harder. More space was needed inside the existing envelope. And, despite taking out a floor, Foster and Partners has achieved that, with an increase of 2,000m2. Along two sides of the atrium, galleries project into the space, new lines of white concrete fins holds up the extended floors, objects and, in the future, the glass roof that will replace the now poorly performing eighties polycarbonate barrel vault. It is out of sight already. A new layer, barely touching the edges has been added on the fourth storey, yes for more space but also to reduce the light. Its zig-zag edge, supported by the fins, allows light down around the edges of the atrium on to the major exhibits. Faceted aluminium panels on the underside of this plate each have gaps between them so anchor points and brackets can be moved should a rehang of the V-2 rocket be needed.

The beauty of this first-floor entrance is that you can pause and appreciate being part of the opened up atrium, along with the Harrier and the Spitfire

At the moment this new floor is booked for events until Christmas, though on a hot summer’s day it was sweltering up there. Ultimately it will be home for the current conflicts exhibits, though one might wonder if there is really space – it will have to be a highly edited show. The bridge on to it, like the new permanent staircase, is enclosed by chunky balustrades lined in steel with a hot-zinc applied finish and a smoother inset handrail in stainless steel. Elsewhere, on the edges of the floor, like the edges of the atrium, big planes of glass, capped with stainless steel, give a sense of openness.

It seems unfair to skate over some of the more interesting operational features, notably the removable platforms in the floors in one corner of the building, with a huge scissor lift under it for shifting major objects when they next need to be reordered, in perhaps 20 years. And of course there is the detail of cleaning some of the perilous atrium shelves and their major exhibits. Dusting is done from a spider manoeuvred into the atrium.

Still to do: create a ground-floor entrance, open up the museum to the park on both sides, move painting galleries in the oldest part of the museum, complete the circuit of circulation on each floor, and sit down for a nice cup of tea in the new dome tearoom right at the top of the building. Madness of war yes. Mad visits no. 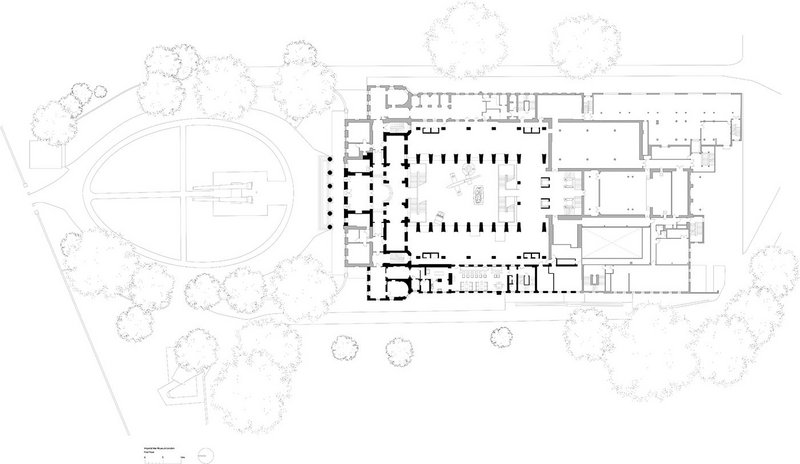 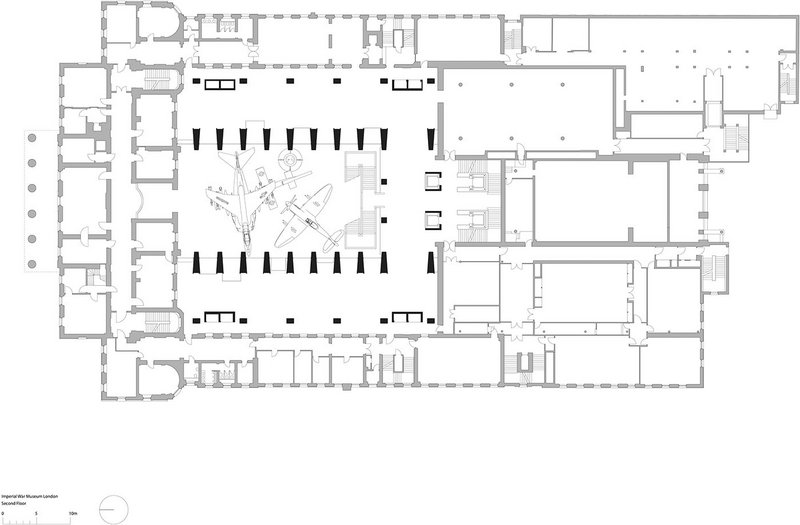