London views tempt broadcaster to settle in the Shard

At first, the choice of the Shard as the location for Al Jazeera Media Network’s UK headquarters and broadcast studio might seem a strange one, located amid its many floors of speculative commercial office and luxury hotel space. The skyscraper might seem to offer the very opposite of the black box bunker mentality of traditional broadcast studios.

Yet a visit to its new 16th floor premises, designed by John McAslan + Partners (reception and offices) and Veech x Veech (broadcast studio and newsroom), is enough to convince that it is an inspired choice. First, the high degree of landscaped security at ground floor is ideal for a broadcaster of its nature. Secondly, Al Jazeera was able to use the top of the ‘backpack’ part of the Shard for cooling for its huge array of servers. And thirdly, rather than a hindrance, the floor to ceiling glazing has become an asset, harnassed as an integral part of the broadcast experience. ‘We’re integrated into the fabric of the city rather than being on the outskirts looking in,’ says Al Jazeera global art director Patrick Bedeau.

Technical advances mean broadcasters no longer need warehouse-style accommodation to house black box studio facilities, says Bedeau, and can instead contemplate using spec office space. By treating the windows with specialist filters, Al Jazeera can film content against any live backdrops of the capital to supplement its footage from the main broadcasting studios, which can also make the most of the views out.

‘We’re not afraid of light anymore – we can control it. We can film against the skyline,’ says Bedeau.

The 2583m2 offices are designed, he explains, with an emphasis on transparency and translucency. Instead of a conventional reception desk, visitors are met with a sleek, white table and benching with a media wall behind. This table, and the sinuous contours of the ceiling, guide the visitor towards the open-plan offices, which are arranged around the perimeter. Edit suites, make-up, voice-over booths and control rooms are positioned to the centre of the plan.

In its design of the newsroom and main tv studio, Veech x Veech had to contend with floor to ceiling heights of 2.8m, considerably lower than conventional studios. The studio design makes a virtue of these low ceilings as a feature of the on-air picture, combining acoustic panels and LED lighting in a dynamic ceiling ensemble. The same approach is taken in the adjacent newsroom.

With the exception of a touch of blue in reception, the restrained palette wisely allows the views to dominate.

Al Jazeera’s London studio, described by Bedeau as the most technologically advanced global production facility in the world, will now become the template for the media group’s further studios worldwide.

Al Jazeera isn’t the only broadcaster pioneering in fast-changing London Bridge – with Murdoch’s News Corp already based next door to the Shard, a new media enclave might just be developing. 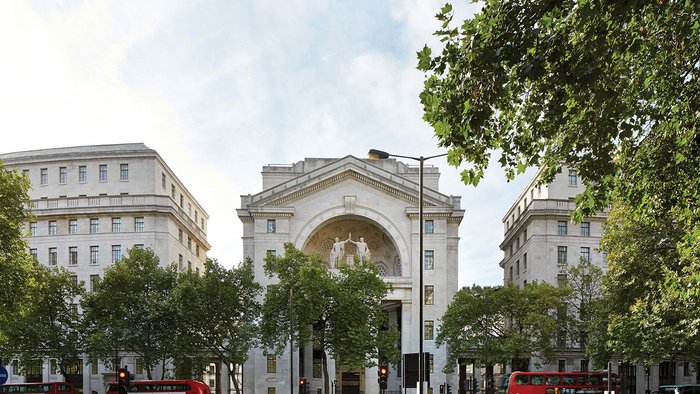 No beating about the Bush