Deeply peaceful but not mute: every detail of these buildings and guesthouse in Iceland has a story to tell, finds Guja Dögg Hauksdóttir 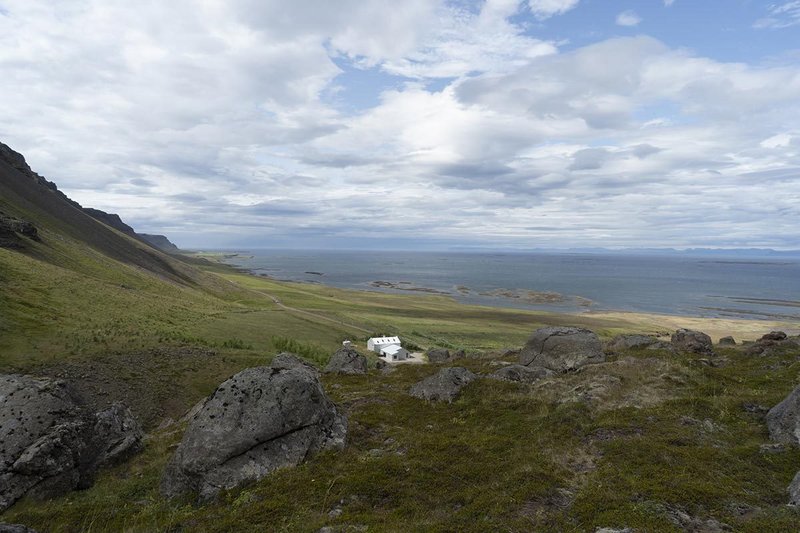 I open my eyes after a deep sleep and meet the sharp gaze of a small bird positioned on a rough wooden rafter that sticks out of the exposed, softly swept concrete wall. After a moment I realise the life-size bird is not real, it is cut out of wood and painted in its natural colours, white and grey and black. I cannot see the feet due to the bird’s position high up, just below the ceiling.

I arrived at Nýp cultural retreat on the Skarðsströnd coast in west Iceland late last night after a long drive from Reykjavík. I was tired and it was too dark to sense much more than the comfortable scale of the room. It is light now and wonderfully silent, as blissfully quiet as the neatly cut wooden bird that continues to stare at me. The silence is by no means mute, as I eventually notice when I look around. The room is unusually rich in narratives, delivered through non-auditory elements, which appeals to my curiosity and imagination. The colours are natural, the same as the bird’s. Materials and texture, form and proportions are teasingly just a bit off the ordinary. This ignites a search for the stories that lie all around.

These lie in the smallest detail as well as the bigger picture. Nýp consists of a little group of small-scale buildings, tucked together under a hazardously steep slope, with a vigorous mountain river flanking the site. The buildings gaze towards the breath­taking view over Breiðafjörður bay nature reserve, with the tides that speak of sea birds and seals, purple glossy seaweed from the ocean forest and silvery dry driftwood from Russian forests, repeatedly emerging and disappearing.

The architecture at Nýp mediates between old and new narratives, linking invisible but palpable traces from the Middle Ages with a respectful restoration and contemporary design by young Oslo/London based practice Studio Bua. According to the 700-year-old Skarðsbók law manuscript, Nýp was a sheep farm built in the traditional multi-gabled form of local rock and turf. In the late 1930s it was replaced by a two-storey concrete structure, built using local rock and sand this time, that combined a home and a barn with an adjacent sheep shed. When the current owners took over the place in 2001, it was close to ruin. The couple, a graphic artist and an academic historian, had a long-term dream of creating a place for artistic and cultural events, drawing on the innate values of the surrounding nature and the local community, which despite the extraordinary area’s nomination as a UNESCO World Heritage Site has been rapidly depopulating.

Here I am. Waking up far from and yet close to everything, I slowly start to sense the various parts of the building as I sneak through the interlinked spaces from the new guesthouse wing, which is built on the remains of the sheep shed. I move through the central hall up the simple stairs to the big parlour – both common spaces for exhibitions, concerts, literature readings and workshops, occupying the site of the old barn. The former sheep farmer family apartment is now used for dining and additional guest rooms. Rich stories are presented in the tactile surfaces, old concrete and new concrete and sweeping light from new window openings. The architect’s overall approach has been to renovate without breaking the history of the house, simultaneously honing the form, proportion and spatial character of the new. It has done this by combining minimalistic shaping with a keen attention to detail, texture and scholarly references to the built heritage.

Wherever possible, reclaimed building materials have been used, not so much for the sake of the modest budget but to emphasise the sustainable approach and the right atmosphere. The former barn, now part of the main house, has been split into two levels with a new floor using local driftwood. The ground floor with the workshop is kept rustic, with exposed concrete surfaces, visible plumbing and iron details. The new wooden staircase has a simple rail fastened directly to the wall, a black-lacquered iron bar and handrails derived from an old fish oil factory. Vintage armchairs, a pair of binoculars and old charts of the bay with its countless isles and skerries are installed on a platform by a big new window on the front facade. Two steps further up a large space is furnished with a long table for entertaining that can quickly be removed to make space for a concert, lecture or poetry reading. The room has wooden floorboards rescued from a desolate farm nearby. Ceramic tiles made from clay sourced from the next valley are arranged by a reused iron fireplace. Hidden inside the concrete walls of the hay tower is a small kitchen. On the rear gable a horizontal window has been cut out towards the massive mountain slope and a rhythmical series of generous skylights have been placed in the roof above.

Meanwhile, the former residential part of the site has been gently restored with new insulation and windows resembling those of the 1930s. Parts of the original panel-clad walls have been replaced with exposed concrete, echoing the contemporary design features of the building. This adds to the various narratives of the old house, with its clashing elements of modernist corner windows and cottage style built-in cupboards and cosy nooks. This intimate and personal atmosphere is enhanced by vintage furniture and contemporary artwork such as etchings, drawings, paintings and small sculptures together with a compilation of round stones and shells from the seashore.

To the east of the farm, a greenhouse has been erected over old concrete foundations. The polycarbonate clad steel structure is bolted down to withstand the wind that intensifies in strength down the valley. An organic kitchen garden is sheltered within the void of the open foundation structure. The architect has also laid out new woodland, emphasising the sustainable ethos of the place.

Lastly, there is the adjoining new guest wing where I woke up to a staring bird. Parts of the old sheep shed walls have found a new voice in the rebuilt and redesigned structure, with a combination of sensitivity and disciplined boldness. The guest shed has a separate entrance from the back of the building, reached by a traditional turf-topped low stone wall. The glazed, double-width entrance doors invite you into a long, naturally lit gallery space for changing exhibitions. From here is access to three en-suite guest rooms facing the wide view of the bay. All internal doors are reclaimed and restored from 19th century houses. A handful of handmade local clay ceramic tiles add a warm touch to the smooth concrete floor.

Nýp cultural retreat, with its tactile materiality and restrained spatial expression, has led me to contemplate the dialectics of silence and sounds in telling stories. The place embraces you quietly. Regardless of the weather, temperature, wind or tide, you feel slowed down, silenced, in a good way, and opened up to the effortless conversation of past and present.