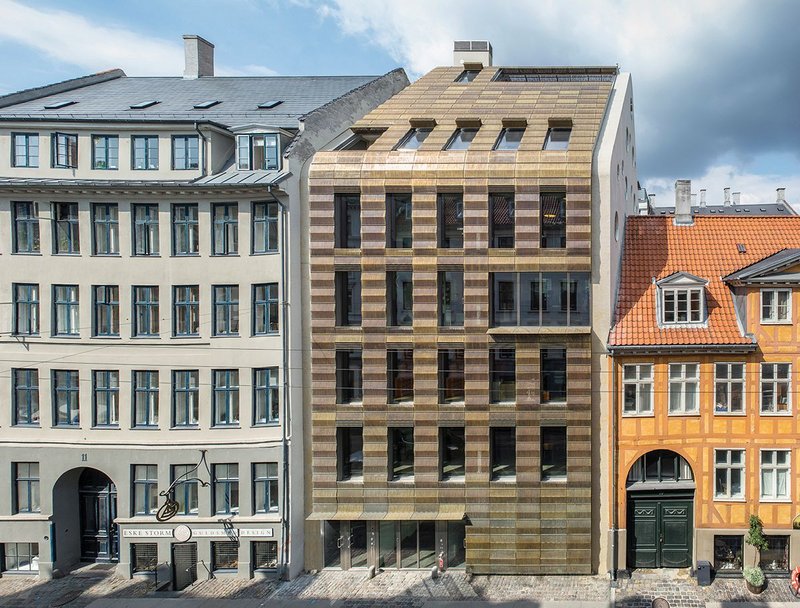 Enclosing the building from roof to floor, the copper screen facade is peeled back to expose the windows during the day. Credit: Jens Markus Lindhe

When the owner of jeweller Trollbeads ­approached architect BBP, it was thinking only of changing the windows in its newly-­acquired Copenhagen premises and incorporating an apartment. It ended up with ­something rather more spectacular – a deeper, taller building dressed in a patterned brass cladding screen that folds up and down like a Venetian blind.

This extraordinary building is situated in the historic centre of the Danish capital in a terrace between houses dating from the 18th and 19th centuries. The site was a 1964 office building set back from the pavement and rising six storeys. Trollbeads owners Lise and Peter Aagaard wanted to convert it into their company headquarters with an apartment for their use above. Given the nature of the business, security was a high priority.

With the client wanting a highly glazed elevation, BBP partner Ebbe Wæhrens swiftly arrived at the brass curtain concept – knowing that achieving permission for a mainly glass facade in such a historic context would be most unlikely. His solution was to replace the original facade and its wooden framed windows with a glass skin using Schueco’s stainless steel Jansen Janisol system – but then to overlay this with a perforated brass screen. This veiled solution gave the ‘polite’  appearance necessarily for planning consent and added another layer of security while granting the clients’ original wish for a glass house, says Wæhrens.

‘It’s hi-tech, very elegant and sophisticated but discreet and concealed,’ he adds, describing it as an ‘inverted’ curtain wall.

While it may be polite, it’s certainly not boring. For this house has three distinct modes. In the morning when the office opens, approximately half the screen folds up automatically to reveal conventionally-proportioned windows on the main and rear facades, scaled to match its neighbours. Occupants can lower individual blinds from the inside if required to screen the sun during the day. All raised blinds lower automatically when the office is vacated in the evening, to transform the elevation into a closed, burglar-proof vault.

Aside from the roof terrace and a small sixth floor balcony, the screen remains folded up only at the main and adjacent vehicle entrances, where it forms a canopy aligned with the lowest canopy on the adjacent building. Another canopy at third floor level aligns with the roof cornice of its neighbour.

The third mode comes in the evening, when the building is illuminated with a golden glow by ceiling downlighters along the inside of the facade, highlighting the perforations in the screen and revealing the modern glass house behind. The whole thing ­resembles a giant, precious jewellery box. This lighting turns off automatically at midnight.

For the perforated screen, both client and architect wanted a ‘noble’ material redolent of the silver and gold used in Trollbeads’ jewellery, just as the curtain walling relates to the firm’s signature glass beads.  Brass was a practical and affordable choice that gave the desired golden appearance. KME’s Tecu Gold alloy was specified, an alloy of 89% copper but with 5% aluminium, 5% zinc and 1% tin to ensure it wasn’t too shiny. The pre-patination gives a slightly matt effect that won’t darken with use.

The 1mm thick brass screen was made from a combination of 1m x 300mm hinged single panels for those areas that open and close, and 1m x 600m double panels with a bend in the middle for the other, fixed areas. These panels were fixed onto one-storey-high stainless steel frames which were then mounted on the building, leaving 300m between the glass curtain walling and the brass screen. A motor to the left side of each frame connected to the right side with an axle activates spindles inside each side of the frame to lift and lower the hinged panels.

Wæhrens’ concept for the screen perforations was inspired by the thickets of thorns used to protect treasure in fairytales. He commissioned textile artist Lene Toni Kjeld to produce the repeat abstract pattern for the perforations, which needed to give an optimum of 25% open-ness. Any more, and the holes would become too prominent and stop the elevation reading as a facade with windows when it is in open mode and seen from afar. By limiting the number and size of holes, patterns only become evident closer up.

The design incorporates seven variations of pattern created with holes – made using a programmed revolver punching machine – ranging from 6-10mm in diameter.

A full-size prototype was made and put through a wind tunnel test to prove the screen’s robustness in storms and to allay fears that it might whistle.

At the same time as replacing the facade, Wæhrens suggested enlarging the building by 2.5m at the front to fit adjacent building lines. Wæhrens thinks of the extended house as operating like a Venetian merchant’s house – with deliveries safely loaded on the ground floor, office and stock on the first, and above that, two floors of living accommodation and a roof terrace, with the two party walls raised and reshaped in order to follow the line of the neighbouring mansard roof.

This proved the most complex and challenging part of the project, since the curtain walling carries on right up over the rounded mansard to form the pitched roof. It was achieved using the Vitral stainless steel roof system. The gable side elevation is treated differently and playfully with large circular fire windows – visible only from afar – inset in the 800mm thick wall.

Wæhrens enjoys the fact that while the windows in the seemingly ‘open’ part of the elevation don’t actually open, those in the ‘closed’ section can be opened for ventilation behind the protection of the screen.

He hopes that the resulting building, which took some six years to realise, is both ‘subtle and noble’, respecting nearby historic properties and the 60s base building while creating very much a contemporary intervention. It’s certainly been a hit locally, winning awards from the City of Copenhagen, Danish Architects’ Association and Danish Steel Institute.