Is it a private school? Or a care home? Mae Architects reinterpreted tradition at charity for the elderly Morden College to create a lively, sociable and stylish centre for its residential campus

Sitting in the more intimate north end of the restaurant next to the open terrace door, where a light breeze brushes past a dusty pink banquette seat before filtering into its main space, Morden College resident Jackie seems to have found her spot. From her vantage point, she can see other residents come and go and look beyond the colonnade to the south-facing terrace and garden. She recalls her own experiences of care homes from her youth: ‘A picture of the Queen on the wall, Emmerdale Farm on the TV, magnolia-painted lounges,’ she tells me before adding ‘but it’s different here. It looks so simple but then if you look, you can see it’s put together so thoughtfully.’ Jackie says she spent two years interviewing to get into this place and she’s going nowhere. After her success at this Oxbridge exam for the elderly, she’s earned the right to sit exactly where she likes. 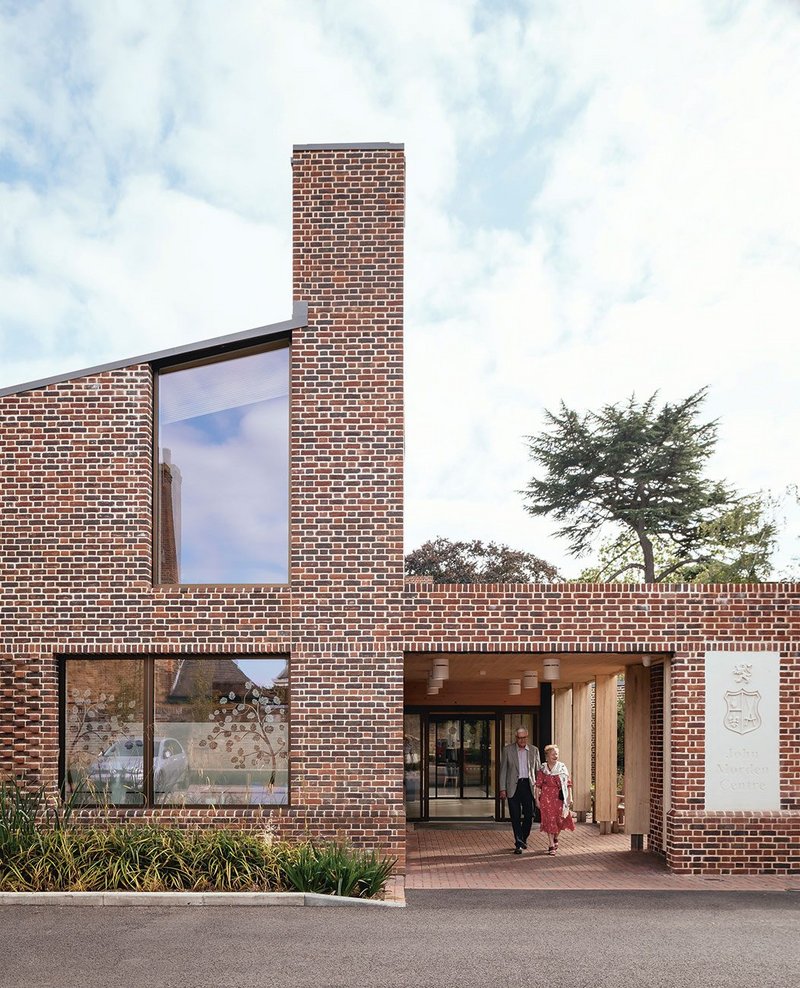 The north main entrance references the Swedish modernists. All the building’s themes are legible here: the pavilion form, the colonnade and landscape engagement. Credit: Jim Stephenson

Jackie tells me that most locals don’t really know what goes on at Morden College, sited out of view at the end of a drive on Blackheath’s eastern fringe. But while its sign gives off the air of a private school or university, it is something altogether different, as Mae Architects’ Alex Ely explains. Wealthy 18th century trader Sir John Morden, having amassed a fortune plying the spice routes, saw his own success in the context of many other merchant seamen who had lost livelihoods through storms, pirates or some other visitation, and decided to put some of his money to philanthropic use. He founded his almshouse in 1695 which, funded partially by the pious Lady Morden, also enshrined elements of emotional as well as bodily support, with an on-site chapel and dedicated chaplain. Now spread over two campuses, both offering safe harbour to those elderly encountering hardship in all its forms (one even dealing with respite care), an ongoing endowment means the Morden’s charity continues – and the chaplain remains to this day.

Mae’s John Morden Centre, the Blackheath campus’ day care facility, takes a lot of cues, says Ely, from the original grade I-listed almshouses, attributed to Christopher Wren but more likely the work of his master mason Edward Strong. Walking through a portico watched by stone statues of the benefactors, the two-storey quadrangle you encounter, run around by a stone colonnade, has a serene charm that belies innovations that would be modern even now. Ely highlights its timber-frame, brick-faced structure and double gable roof whose central gully takes run-off down to lead cisterns set below the quadrangle’s grass, which would once have provided rainwater for drinking and ablutions to the rooms.

But, Ely adds, it was the form itself that proved inspirational; appendages comprising the chapel, dining hall and library, and a more contemporary social area bulge out curiously from its square. And while the new building with a long spine colonnade that serpentines around might not obviously speak of the same provenance, Ely says this approach arose from a number of constraints: a boundary wall to the south, car park to the east, a retained 1970s social hall to the west and demolished ad hoc café and art spaces between – plus an old Cyprus tree. ‘The site didn’t lend itself to the almshouse’s pure geometry but it did to the idea of a colonnade spine running along with pavilions appended along its length,’ explains the architect. The timber frame, colonnade, expressive roof and chimneys – here part of the natural ventilation strategy – these cues were all taken from the main building.’

There’s no doubt that the client was expecting a lot, not just because it was in the shadow of a grade I building, but because CEO David Rutherford Jones had whittled Mae down from an invited shortlist of five after having seen for himself the potential healing power of good design in Maggie’s Centres. ‘His view was that residents should come out of the building feeling better then when they went in,’ recalls Ely, but the charity’s choice of Mae stemmed from more than a belief that it would produce a building that respected its quality of life aspirations. Already engaged on a care home on the former Aylesbury estate, Mae also understood specific elderly care needs. While Morden College might have baulked at some of the more outlandish Maggie’s centres, Mae convinced it that it ‘wanted to do something contemporary and uncompromisingly modern but which felt of the place’.

It’s a similar approach to Mae’s contemporaneous and 2022 Stirling Prize shortlisted Sands End Arts & Community Centre in west London (RIBAJ December 2020); designed at the same time, they can probably be considered sister projects. The CLT fins that so elegantly define the roof structure at Sand’s End here become the whole structural strategy, with massive CLT structural insulate panels making up the structural walls and pavilion roofs, each formed of two triangles back-to-back to generate the pleasing and lofty internal geometry, mitigating not only the building’s embodied carbon but the programme cost too, as it went up in next to no time. Unlike Sands End, there was no recycled brick used due to the need to blend in with the mixed-stock almshouse, but the lovely protruding and hit and miss brick detailing, while not low carbon per se, does have a patina, longevity and robustness that speaks of more ethereal notions of sustainability. The English garden bond running along the spine’s length all leads to the retrofitted 1970s social hall, which, given its self-conscious octagonal form, actually blends seamlessly into the pavilion ensemble.

Mae put thought into the sequencing of the building, with other spaces – such as a courtyard garden at the entrance – revealing themselves to users before they embark on their journey through the building, and at every ‘crank’ of the spine you will either enter a pavilion or be gifted a view out to the landscape through the glulam colonnade. On their journey residents will pass a GP health centre, a reception lounge, shop, welfare office and hairdresser, art room, restaurant and social hall. ‘We wanted a sequence of spaces where you’re always moving over thresholds and seeing connections,’ says Ely; ‘Weaving around site constraints, it could have been a jumble of architecture but building off the cranked colonnade, your journey shifts as you move.’ And he’s right, the crank introduces experiential complexity to what would otherwise be the simple lining up of spaces, layering the journey with the landscape outside.

And the bigger picture is augmented by details, with concessions to physical vulnerability invisibly stitched-in.  On entering, my hand gravitated to touch a large timber glazing transom to realise it was formed as a handrail; and oak seating is thoughtfully set into the spine wall to allow the corridor not only a space for individual rest but for meaningful interaction with others. With the art room eating an ‘L’ into the restaurant, not only does the actively turps-fuelled space become part of the ‘heart’ of the building, it adds spatial complexity to the restaurant, accentuating the double height volume to its chimney ‘vent’ as well as creating the more intimate spaces that Jackie prefers. A clerestory window frames the high canopy of the Cyprus tree while the adjacent colonnade lets the landscape stretch out away from you; striking concurrent dualities of view better experienced than described. At its simplest level there’s something thrilling about it – it’s like being in a tent. 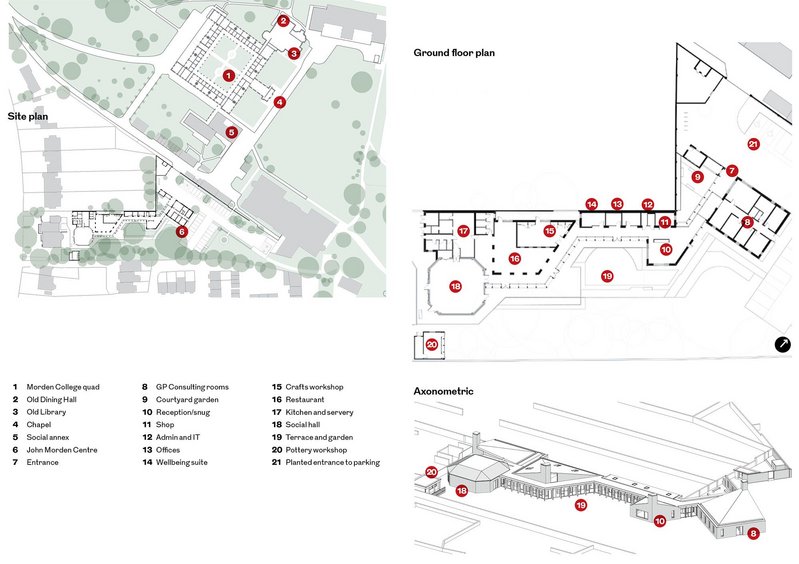 Wandering back along the rear sensory garden path to the front past the colonnade’s sedum roof, it is only looking back along the building’s length to the west that you gain a sense of how embedded the John Morden Centre is in its landscape, sat as it is among beds of wild flowers and gradually building in height to the retrofit social hall and campus building behind it to create a satisfyingly picturesque composition. But it isn’t of course just about the building but the 300 residents that use it and there is no doubt that, despite a pandemic-delayed opening, the opportunities it provides for concerts, yoga, social evenings, art and sewing clubs, or simply sitting and hanging out with family and friends in the café, have been grasped with both hands. Its strange to use the word ‘abuzz’ for an elderly care facility, but it is; and with residents’ own artwork adorning its walls, the building carries the imprint of ownership. The sense here is of an active, vivid community in no way ready to retreat from life. It all makes for a fascinating addition that has catalysed the campus and charged it with potential; a new modus operandi that challenges Jackie’s own past perceptions of such places: ‘In the old days they used to have the same silky artificial flowers in all the care homes,’ she recalls. ‘But here, every one you see is real.’