KAAN Architecten’s Loenen pavilion is made to host war veterans’ funerals, educational visits and public contemplation – in a simple, elegant and open structure 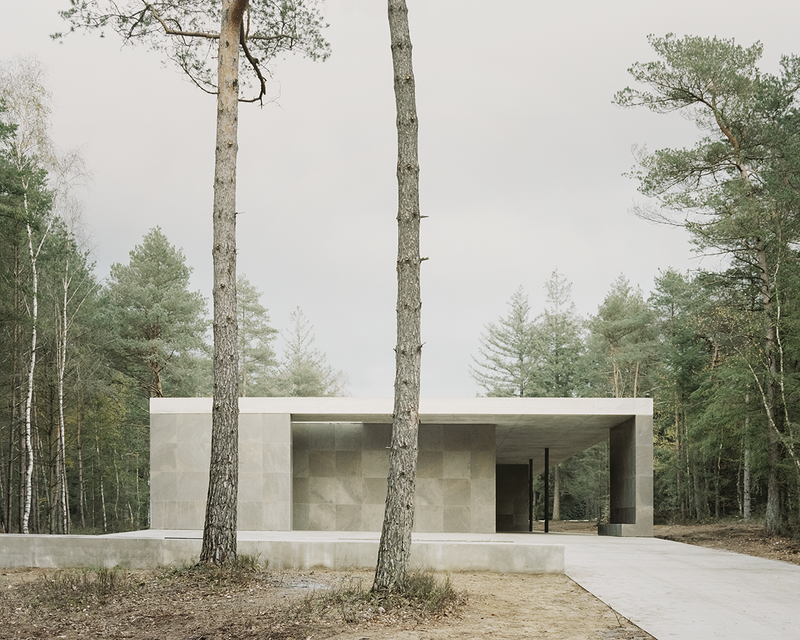 Why do we commemorate? Theo Vleugels, director of the Dutch War Graves Foundation since 2016, asks himself this question every time he walks across the National Field of Honour in Loenen, 18km north-east of Arnhem in the east of the Netherlands.

This honorary cemetery in the forest opened in 1949 and was designed by landscape architect Daniel Haspels around a radial (visual axis) co-ordinate system with a large white cross in the middle. Beneath moss-covered tombstones intersected by winding paths lie around 4000 repatriated war victims – soldiers, resistance fighters and ‘Engelandvaarders’, or ‘England sailors’, which is the term given to men and women who attempted to escape from the Netherlands to England.

‘Historically, commemoration is a form of mourning, a way of coming to terms with what happened to us in the war,’ says the retired major general, who served 40 years in the army. ‘We tend to think in terms of victims and perpetrators, but there are many shades of grey in between.’

By way of illustration Vleugels names the seven fields of honour in Java, Indonesia, a former Dutch colony, where the Netherlands is depicted in its light as the former ruler. ‘What’s special about [Java] garden of remembrance is that different nationalities and religions are buried next to each other,’ he explains. ‘Last year some 15,000 people visited the site; they want to know more about the second world war, polish up memories and think together both about what happened and how to prevent it in the future.’ It brings him to the question of what a contemporary monument is. ‘Is it about not forgetting? Then the function is only temporary; the generation that lived through the Second World War is not there anymore. Or do we want to learn from the past?’

The latter is what Vleugels aims for with the multifunctional building that KAAN Architecten has completed in the honorary cemetery. The pavilion, an enormous concrete floor and roof slab, between which natural stone walls organise the space, is not only intended for ceremonies with funerals for those buried in a new national veterans cemetery next door and the Field of Honour, but also for education. It has an exhibition space, where stories about the people and lives contained in the war graves are told and visitors are challenged to reflect on them, with questions such as: what would you do in such a situation?

The new pavilion was prompted by a request from the National Veteran Cemetery Loenen Foundation for an expansion of the field of honour, where casualties of war are buried without need to pay. The War Graves Foundation had bought a site adjacent to the original cemetery to accommodate both the expansion and a commercial cemetery where veterans of more recent conflicts and, if desired, their partners, can be buried. Dutch landscape architecture firm Karres en Brands was responsible for the design, which consists of a series of oval-shaped open spaces to accommodate new war graves. Vleugels saw the commercial cemetery, which also included a 500m2 building, as an opportunity to create a thread running from the past to the present and to involve a wider audience in the commemoration.

Located between the first two oval 'forest rooms’, the pavilion stands on one of the five new radial viewing axes – a symbolic intersection, with a north-south view from the field of honour towards the veterans' cemetery and a view of the central cross via the east-west visual axis. For KAAN architect Vincent Panhuysen, this location was why ‘I knew we had to design an open building’.

The simple open structure of grey-green natural stone with white veins and concrete to which moss will adhere, blends into the forest and brings in the serene atmosphere of nature through full-height windows in addition to skylights. The covered entrance on the eastern end offers space for receiving the funeral procession – with car, military police, music corps, etc – and the military ceremony. Visitors walk through the gallery to the auditorium on the western end, with space for speeches and a last salute. Afterwards, they leave the auditorium via the northern corridor to the refectory for a cup of coffee. Between the auditorium and the refectory is the exhibition space, which can be connected or separated from the other spaces by means of large sliding doors. Thus, the building can be used in all kinds of ways: funerals, celebrations, debates and school visiting programmes.

Inside the gallery, the exhibition starts with a film projected onto the natural stone slabs. Then there is a world map marking out with light points the geographical locations of the 100 military missions in which the Netherlands has participated since WWII. Using headphones, visitors can hear the stories of war victims narrated by a next of kin, with photographs appearing in one of six mirrors. These simple means make tangible the message that war is not only something from the past or far away, and peace is not self-evident.

Loenen Pavilion is a restful space with a sharp edge that is exemplary among current discussions about commemoration in the Netherlands. These are no longer just about pride and consolation, but also about recognising the not so grandiose moments from history. In March 2020, King Willem-Alexander apologised during a state visit for the Dutch violence in Indonesia. In June, the Bosnian Girl collective erected a temporary monument on the Plein in The Hague to the genocide in Srebrenica which took place 25 years ago, during the Dutchbat mission. In the same month the anti-colonial writer, activist and resistance hero Anton de Kom was the first Surinamese person to be included in the Canon of the Netherlands (the guideline for history education). De Kom is buried in the Field of Honour in Loenen.

How, who, what and why do we commemorate? The discussion is not over yet, polarisation is lurking, and that makes space to discuss this with each other so important. For this purpose too, this project offers a wonderful place.