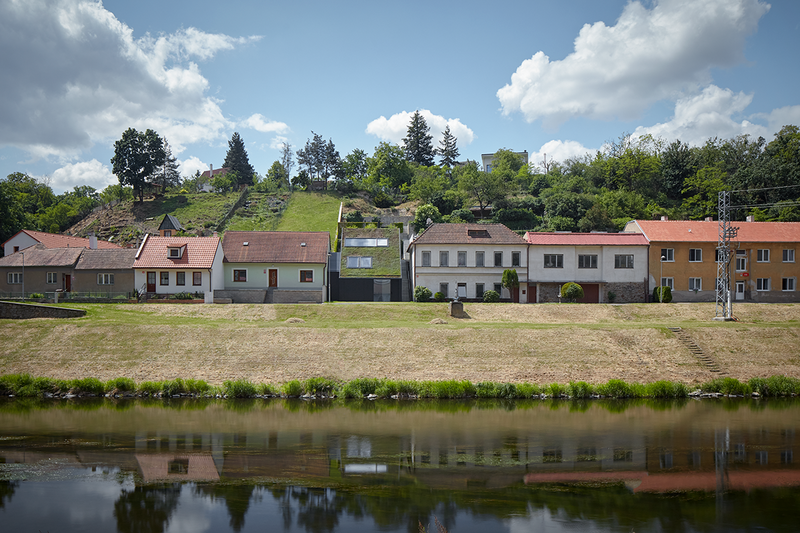 River Valley House is in a quiet suburb, facing across the River Dyje. Credit: BoysPlayNice

River Valley House is located in the romantic Dyje river valley of the southern Czech Republic, just a few kilometres from the border with Austria. Commissioned by 3D visualiser Norbert Walter and his young family of four, this family house in the city of Znojmo responds to the specific topography of this historic Moravian city and was designed by Brno-based architecture firm Kuba and Pilař.

‘The client is my colleague and friend,’ explains architect Tomáš Pilař who, with his partner Ladislav Kuba, has run the practice for many years. ‘Although he studied architecture, he never started to do it. Instead, he started doing visualisations. At time we met, we were graduating from the Academy of Arts, Architecture and Design in Prague and he offered to do the visualisations for my diploma project in 1993. Since then, we have worked together.’

As a result of this previous collaboration, the project was personal and a bit more special for both sides from the beginning. The challenge was to create an inspirational modern dwelling in a very specific natural and historical context. 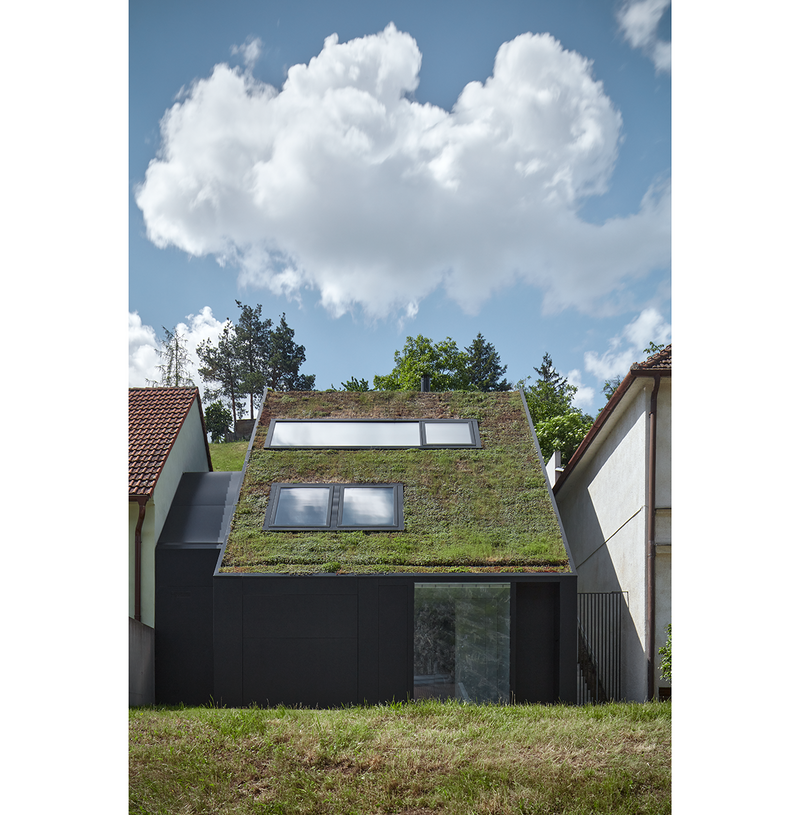 The green sloping roof differentiates the house from its neighbours. Credit: BoysPlayNice

‘I grew up here in Znojmo and after living in bigger cities, travelling and studying, I decided to come back and settle down where my parents originally lived. It was the right decision,’ explains Walter. Znojmo is known for its rich history. The area was already inhabited in the eighth century and has since been an important point on the map of central Europe. During the 13th century, it was named as a royal city and became an important centre of trade and agriculture.

Today, the medieval centre and the spectacular views from its old fortifications bring tourists to Znojmo – as well as its surroundings, where some of the best wine in the Czech Republic is cultivated. It’s a vibrant place where a new generation of enthusiasts are helping to stimulate a cosmopolitan culture, including galleries, theatre and high-quality regional architecture. The client of the house belongs to this influential generation of locals improving everyday life and culture here.

The house is situated on the edge of this historical cityscape and its surrounding natural landscape in a quiet and calm southern suburb, next to the meandering Dyje river. Right next door is the house where Walter grew up with his parents. Just a few metres from the house, the Podyjí National Park starts, one of just four national parks in the Czech Republic. It is in this intersection between the natural and cultural landscape that the house finds its contextual modern expression.

‘We knew the place for a long time. It is a very steep site, close to the historical centre and to the national park as well. But the process of designing went very fast here,’ says Pilař. ‘Norbert already had some ideas. He approached us to look at them. But it shifted. We didn't want the new house to stand out among the others. We tried to make a contextual architecture, but without material descriptiveness. We wanted to do it with respect for the environment.’

The result is a three-storey house with a green sloping roof facing the beautiful scenery of historical Znojmo on the other side of the river. With its small dimensions and modesty, the building merges with its surroundings of old, predominantly low-class 19th century dwellings. The facade, clad in black metal panels highlights the modern aesthetic, while the roof with its vegetation creates a visual feature of the front facade. This is perforated by two rows of windows, indicating the position of the upper floors.

The entrance is situated on the right side of the street facade and leads into an impressive stairwell hall which reaches the height of the whole house. A narrow stairwell is attached to the western side of the house, constructed of tall narrow translucent glass panels (similar to glass bricks) which bring light into the pure white interior. On the ground floor is a small 3D visualisation studio, while the first floor serves as an intimate part of the house, with bedrooms for the whole family. The top floor comprises a living area with an open space and connection to the high-level terrace at the back of the house.

‘The place is difficult due to the steep slope. We had to invest a lot of time and money to prepare the site for construction. The client wanted a low-energy house and he did not want to worry too much about it. So we tried to design as maintenance-free a house as possible,’ Pilař continues.

Despite the front facade of the house being oriented towards the north, the interiors are well lit and sunny. The children’s rooms are located on the first floor and have large windows that look onto the river valley. The master bedroom and guest bedroom are positioned to the back of the plan and are lit by the little atrium. Both parts are divided by the central corridor with the skylight and plant wall at the end.

The upper level has an expansive glass wall toward the south, which brings enough light into the main living space. It is defined by all-white smooth surfaces and an open-plan living scheme, with the small kitchen in the middle of the sitting area on the north side, and a dining area on the south. All technical structures, bathroom and toilets are located in the compact module of the service area, dividing the main staircase and the open space of the living room.

Attention to detail has been essential to the project. ‘I was obsessed with the details,’ says Walter. ‘The whole house was built to the exact millimetre. I was on the site all the time and drew special drawings to all the craftsmen so that it would be quite clear and that it would all fit.’

He adds: ‘That is why I built it for so long period of time. It took me six years to finish it. It required maximum precision from everyone. But now I am very happy.’

The project is a great example of Czech contemporary architecture, one which fits into its geographical and historical context without eclectic gestures and the sometimes not so logical features which are dictated by over-regulated Czech building laws.

‘Despite the house being located in a protected historical area and just around the corner from a national park, our design was accepted by authorities very well,’ concludes the architect. ‘It is a good message for all architects working on smaller and historical cities and towns in the Czech Republic.’

Adam Štěch is an art theoretician, curator and writer on fashion, design and architecture based in the Czech Republic