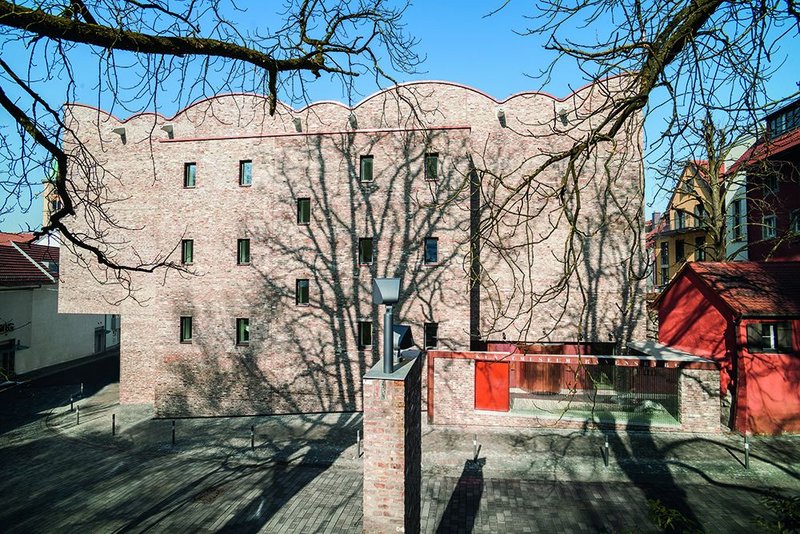 It’s below -4°C outside and random flurries of snow eddy between the narrow medieval streets and stepped, steep pitched, Teutonic rooflines of the Ravensburg’s Innenstadt – white noise interfering with the vertical hold of its picturesque chocolate box townscape. By contrast, it’s warm as toast in its new art gallery – 22°C to be precise, with a slightly damp, laden humidity of, right this moment, 50%. These seem perfect conditions for an insouciant Latin-looking lady, alone on a wall, staring out from within a heavy, wrought, dark wooden, gilded frame.

European expressionist Alexej von Jawlensky’s 1912 ‘Spanisches Mädchen’ is one of the colourful residents of the gallery, which opened last month, holding the collection of eminent local businessman and art lover, the late Peter Selinka. His wife Gudrun had been considering offering her husband’s entire collection of 20th century art to Stuttgart’s Neue Staatsgalerie, but Ravensburg’s mayor convinced her to keep it in his home town, though only after her demand for a dedicated facility to house the collection was met. Two years and €6m later, nestled comfortably in the oldest part of the city, is the collection’s home – the compact and antique-looking Kunstmuseum, a commission won, ironically, by Stuttgart firm Lederer Ragnasdóttir Oei.

But don’t be deceived by the detailing of the brickwork – for behind it lies a structure and services strategy that has allowed Professor Wolfgang Feist of Darmstadt’s renowned Passivhaus Institute to officially designate it the world’s first Passivhaus gallery. Professor Arno Lederer, founding partner of LRO, seems proud of this, and he should be – art galleries are a notoriously services-heavy and energy-profligate typology. But there’s more to it than that – it’s a homage to his love of Scarpa and Scandinavian modernism.

From a distance the gallery, on a narrow road leading from the central Marienplatz to one of the city’s three medieval gatehouses, melds into the streetscape. On approaching it begins to show itself – the sizeable angled cantilever of the upper galleries, projecting out towards the road, has a soffit of unusual hung brick. Below, a storey-height picture window addresses the street, and most obviously, once you’ve wound your way round it to the front of the gallery, a modern vaulted roof tops it, its end arches strangely terminated mid-spring, their every interface marked by precast concrete scuppers. Once here, you are aware that all is not what it seems. The brickwork is captivating, encased in a pale, gritty mortar of the firm’s own devising. It turns out that these are part of a bigger sustainability argument that not even Feist’s designation took account of. ‘As a firm we love working with old bricks. These were sourced from a ruined 14th century cloister near the Dutch border,’ says Lederer. ’It’s not only the look – we felt why use new material when old is available? It’s how it was done until the 19th century and we’re just trying to return to that.’

External drainpipes are slim, wide, open Scarpa-esque channels of recycled copper sheet set flush with the brickwork which, when it’s raining, run thick with films of water. Copper too forms the reveals of the narrow, triple-glazed openings that pepper the main elevation, and adorns two entrance doors flanking a revolving glass one. Meanwhile, there’s a narrow metal grille covering a gutter that runs around the whole foot of the building, which, though new, seems to be rusting. ‘It seems a good colour for something lying on the ground,’ says Lederer, utterly unconcerned.

With such distracting surfaces it’s easy to forget the principles that make the building perform. Knowing the gallery spaces needed to be precisely controlled, LRO decided no natural daylight at all should enter them. So the gallery is effectively stacked precast concrete rectangular boxes which cantilever to the west. To articulate the form, circulation is installed to the north and south – acting as environmental buffer zones to the gallery spaces and ‘sticking out of the plan of the building like two ears’, with a picture window to the education space at ground and high level light to the basement library and admin. Between the main south stair and gallery space runs a narrow blockwork service wall carrying the air-handling ductwork, electrical runs and water pipes that feed the building.

At the heart of this essentially simple concrete structure, where the architectural gymnastics are reserved, is the second floor gallery brick roof structure, seven interconnecting partial cones that create a distinctively modern vaulted roof. The internal effect is crafted and beautiful but slightly disconcerting. ‘You think you know the form, and then you realise you don’t – we thought this odd effect was good for the raumgefühl,’ remarks Lederer.

There’s certainly a ‘feeling’ to the air conditioning strategy, which ensures internal temperatures do not exceed the 21°C (+/-1°C) and 50% (+/-5%) humidity demand. Under floor heating, fed from a ground source heat system with 100m deep probes and a gas powered pump, maintains the temperature of the concrete slabs at a constant 22°C. In the basement a handsome and neat Minerga air heat exchange and humidifying system also supplies displacement air via ducts through the service wall at skirting level on all floors. This is drawn up and out through ports in ceiling-recessed fluorescent fixtures. On the second floor, side-mounted vault uplights act as baffles for the exhaust ducts behind. Low energy 10W LED ERCO fittings – with adjustable focusing – light the artworks, giving 100W of brightness with minimal heat generation. LRO’s whole strategy here has been to make the process of conditioning the gallery spaces as invisible as possible to keep eyes on the art.

In creating a constant temperature, LRO has basically built an incredibly simple, insulated, but certainly not dumb box. Its pragmatism has led to a small and quite beautiful thing, yet one devoid of preciousness. The humidity draws out the musk of the brick, there’s early 20th century Dutch detailing and the concrete of the main south stair is lightly stained, while its simple oiled iron handrail, a detail that would have made Martin Luther proud, is being left to slowly rust. Despite all that white, the architect quips, it’s not a hospital.

Outside the entrance, a plexiglass screen of thin fins separates a small courtyard from the street outside. While Lederer points out that by night this refracts the neon artwork in the gallery, it’s me that’s talking about the beauty of incidental spaces – his only comment is that he thinks ‘it’s a nice space for smokers’. Nice, of course, until a deluge hits, when the concrete scuppers will take over from his fine copper gutters, directing the waterflow 17m down to the courtyard below. I picture the scene with the adrenalin consternation of a knight expecting boiling oil from the ramparts. ‘But won’t visitors get soaked?’ I ask stupidly, forgetting that this is man who understands our relationship to climate. ‘How?’ he asks, ‘Who’s out smoking in weather like that?’

The roof is a brick vaulted design topped by concrete ballast and insulation. Thermal bridging was reduced by decoupling so that insulation in the facade and roof formed a continuous layer. The roof form was set by the 450mm deep PFC beams defining the intersecting conical form. Timber formwork was sprung off this, over which was laid a skin of brickwork and mortar, with a concrete layer cast to give strength in compression. Above, a vapour barrier was laid with 300mm of rigid insulation below a two-ply bituminous membrane and slate tiles. The formwork was removed to then reveal the brick soffit.

Triple glazed windows met Passivhaus criteria but the revolving door mechanism did create some thermal bridging. Glazed surface areas in the building are low, with the south elevation windows separated from the gallery space by the stair access core. Most of the heat comes from visitors and the lighting. Air tightness tests of the building shell gave a result of n50=0.3l/h – 50% lower than basic Passivhaus requirements.