Dominique Coulon & Associés’ dramatic architectural space is the opposite of lonely for its happy, confident senior residents in France 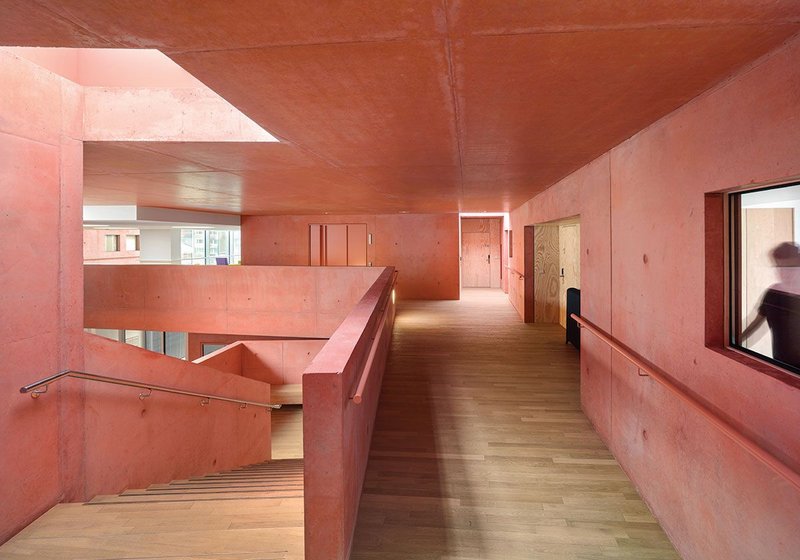 La Dunette housing for older people is named after the ‘poop’, the uppermost deck of a ship where the most important and respected crew live. Credit: Eugeni Pons

I arrive at La Dunette, a housing project for older people in north east France, just after lunch. As I enter the central atrium from the rapid-onset wintry continental chill outside, residents are jauntily making their way out of the communal dining area to the right, heading across the hall towards the monumental dog-leg stair or the tucked-away lift. They are finishing the conversations they started over the dining table, saying hello to me and wishing others a nice afternoon and good nap as they pass. For a few moments the magnificently architectural pink concrete double-height space, with its massive drop down light well and heavy, choppy, blocky features, is filled with activity, chattering and chuckles.

A mother and her two young children are going in the opposite direction, accompanied by the children’s white-haired great grandmother who is seeing them off. Shoes scuttle and shuffle on the smooth yet textured terracotta tiled floor, which continues onto the terrace. Conversations are looping from the bottom of the atrium, up the stair to the galleried landing. There’s a merriment and joviality in the air, as if the midday meal has been satisfying for the spirit as well as the stomach.

As I navigate the bustle and sit down on an armchair in the well of the building to wait for the project’s architect, Olivier Nicollas from Dominique Coulon & Associés, one of the younger residents notices me taking a notebook out from my bag.  Then she jokes: ‘We don’t do any work here you know.’ I’ve been there only a few minutes, and probably look out of place, but I’ve been greeted by five people already. People seem happy to strike up dialogue with whoever is around as they go about their routine.

'On est bien ici,’ says the woman. ‘It’s small but we have everything we need, and the people are nice.’ A few moments later there’s quiet. Ahead, through the glazed opening that punches a visual axis from the entrance through the heavy enveloping concrete, beyond the beautifully wrought wonky criss-crossing black picket railing, the only movement is provided by the rippling Rhine, a few fluttering leaves and the odd cyclist on the promenade. Everything else, everyone else, is still, silent.

We are in France, but to the left across the river is Germany and to the right is Switzerland. This new building, described in direct translation as ‘housing for aged people’, is in a crossroads town called Huningue. I’ve had to go through all three countries to get here, as well as walk over a customs border where I can pass freely but those in lorries are held up by controls and long queues. The town, having been largely demolished during WW2, is a hotchpotch of mostly commercially built, varying quality boxy buildings. The area is now principally a northern suburb of the city of Basel 5km away, although its strategic position at the bend in the river, and longer contested history between these nations, gives it a more illustrious past.

The fleeting convivial atmosphere that has just passed at La Dunette is, however, good news. The centre’s director Sandra Lengert tells me that the primary motivation behind this project for the mayor, who pushed for it, and Ville de Huningue, which paid for the €4m construction and runs it, was to present local people with an alternative to loneliness in old age – a growing problem and killer.

Strasbourg-based Dominique Coulon came to the project in 2013 after responding to an open call. The practice had developed a specialism of injecting unexpected brio into buildings for people at either end of the life spectrum, with an enthralling portfolio of schools and old people’s housing across France. Most of the 17 people who have so far taken up one of the 22 apartments here were living alone in houses or flats not equipped for their slightly changed needs. One woman resident with bad hips, aged 74, was until June living on the fourth floor of a nearby housing block without a lift.

The alternative presented by La Dunette, which is one of 200 examples of this type of building in France and one of seven in Alsace, gives older people a community to engage with at mealtimes and the chance to do daily organised activities with them too. Residents must commit to at least one communal meal a day to help develop a social atmosphere. There’s a communal dining, games and living space with TV, a computer room, multi-activity space, workshop, library and reading area, and that light well doubles as a potent solarium. There is also 24-hour on-call assistance. At the same time, the building acts as a conventional block of studio bed-sits where residents seem to spend most of their time, and can come and go as they please.

‘It’s like sharing one big house,’ says Lengert as we sit down in her office, which at once monitors the entrance and has a glazed open door to the atrium. ‘Whereas people usually live in care homes for 18 months we expect people to live here for 10 to 15 years.’ Residents bring furniture with them and, if they want, their car, which can be parked in the basement (one in two has taken up this offer). And with the other five full-time employees all pitching in cleaning, cooking and looking after the older people, there’s a family feel as well.

It is strictly non-medical, however. The closest UK equivalents might be sheltered or assisted living or retirement housing, though here there isn’t the same requirement for social and health vulnerability to qualify for residence in the former types, or the usual middle-class trappings and expense of the latter. Those might not end up quite so friendly, either. Here, individuals pay €1,500 a month and if more personal care is required, it’s organised externally.

The programme seems ideal, but what sets it alight is its architecture. Dominique Coulon’s concept for La Dunette, built on the former site of a small house, to the rear of an old people’s day centre and next to a creche, was that it should feel rustic and domestic. The jubilant, energetic shrieks and squawks of the neighbouring children playing provides a lovely contrast.

Set back and ramping up from the road, the entrance front recedes and projects around a garden planted with mounds of lavender and geraniums. Volumes cut away to reveal a direct way in between building pieces slotted together like a jigsaw. The pink concrete path to the door gives a hint of what is to come, while a winding one allows for a slower walk round. To the left is a pétanque piste with seating built into the retaining wall, and to the right of the entrance – just as at many houses – is a wood store behind a galvanised grille. The choice of a brick facade composed only of rejects contributes to this rustic look. Bowed, chipped, gnarled, effervescing bricks, which would otherwise have been thrown away, are arranged in a plethora of vernacular patterns contrasting with the smoothness of the inside; from straight stretcher bond to stretcher bond with recessed headers through to perforated screens. Deep mortar joints allow for their various contortions. The effect is fantastic, colourful and crinkly, breaking down the large volumes further and sitting satisfyingly against the slick frameless windows and sharp building geometries. They brought down the cost of the build too.

Through the double layer entrance, the building opens into the monumental atrium. ‘We wanted a big hall to encourage collective life,’ explains Nicollas. Projecting volumes and bold shapes continue to fragment the space, making it surprisingly thrilling given the building’s function, though it is cosier in scale than the photographs suggest – not quite so epic. In the main communal space, dozens of gentle yellow-light globes attached to the changing height ceiling create different ambiances within the same area. Window sills overlooking the Rhine are at seating level, and a professional kitchen comes off the back with a smaller area preceding it where residents can help with preparation. The design is imbued with moments of delight and focus – the built-in bench for pausing on the grand stair, as well as the traditional tiled Alsatian wood burning stove in the communal area that allows the space and activities there to wrap around it.

Upstairs the building feels lower and more intimate than your average apartment block. Circular skylights contrast with the multitude of sharp lines; timber doors and entrance surrounds, sometimes recessed, soften the coldness of the concrete. The white ceiling accentuates the pink. Yet after all this architectural radicalness, stepping into the residents’ narrow, white-walled private apartments is a disappointment. Each has a kitchen-living area, separate bathroom and bed recess, but while some are better planned than others, they range in size from 35m2 for a single-person to 50m2 for couples and feel cramped and awkwardly arranged. In many, the bathroom, sized for wheelchairs, is placed in the middle of the long wall, preventing light from the only exterior window from reaching the kitchen to the rear. There is an internal opening, but most residents have it covered over. Main windows feel like they should be chamfered in the opposite direction to catch better glimpses of that glorious river too. With communal space making up about a third of the building’s floor area, and being apparently not that well used, you wonder whether the dimensions of these rooms could have been a little more generous.

This is important, but should not detract from Dominique Coulon’s efforts. According to Lengert, the building never fails to impress potential residents and goes a long way to assuaging the concerns of their adult children too, which was part of the point. The building is both soothing and scintillating, and the lively lunchtime babble and confidence of its residents surely show the architecture is working.