With space, growing plots and a veil of brick, Levitt Bernstein’s model scheme takes on the terrace 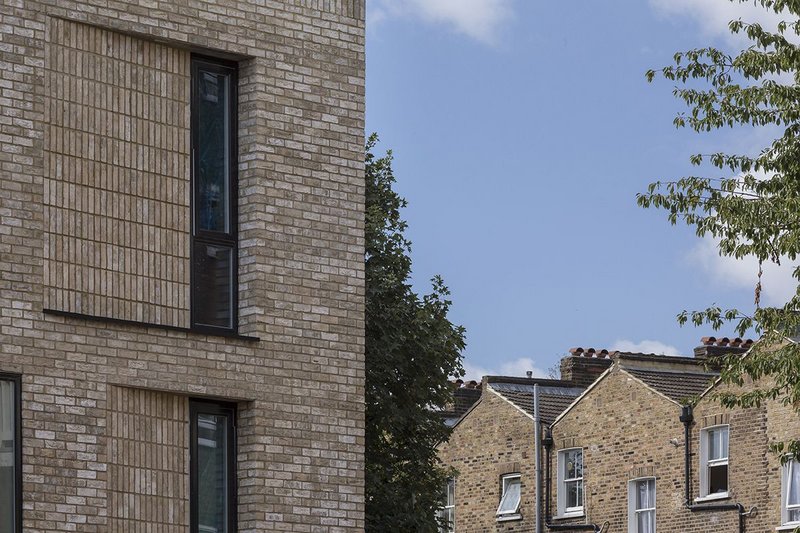 Looking at home amidst the terraces. Credit: Tim Crocker

Around the corner from the tumult of north London’s Finsbury Park station, past the mosque best known for its one time iman radical cleric Abu Hamza, and before you reach the terraced streets where a tight three bedroom commands a millions pound price tag, is a tower block. Ten stories high, its two bed flats are some of that precious capital called social housing. Alongside, in typical sixties style, were single storey garages, a strange gesture that often seems to accompany high density housing of the period.

Over the last few years Islington Council has been leveraging its land values and private development to build more social housing. Vaudeville Court, on the site of the old garages, is one of the early, high profile outcomes. It was launched with some fanfare and a great dollop of political will in 2009 as an open design competition. Housing is Levitt Bernstein’s bread and butter: Its founders also set up the housing association Circle 33 and now the practice has around 5,000 units under way. But this one piqued the interest of director Jo McCafferty and her team as a potential model for other such sites around the borough; one that could truly engage with the council and the local conditions. They devised a scheme of courtyard housing with growing spaces both private and shared, the words ‘produce’ and ‘homegrown’ featured alongside a healthy colourful mixed palette of leeks, cabbages and cucumbers in their submission to the competition to develop the site. This scheme would also pick up and reinforce the existing street pattern.

Being a model project has its own stresses and strains. The first, one that architects are in a constant dialogue with, was that the ambition was perhaps beyond the budget. So the enclosed circulation of the courtyard houses and the garden room it led to were both dropped at an early stage. But the extensive shed in place of the garden room might still be opened up by inhabitants for children to play under and for barbeque parties. Alistair Gale, principal housing development manager at Islington, says that at the budget was still higher than for those at other units now under way elsewhere in the borough. The second strain that if this was to be the benchmark for other council projects, it needed to be absolutely right. There’s a lot riding on it for those in Secured by Design, dealing with access, sustainability and biodiversity. So everyone needed to be at the table: the meetings read like a roll call of council officers. There were a lot of demands but all were aiming for the same good outcome. ‘A positive journey,’ says the architect.

Given that, it is remarkable that the resulting homes are so handsome and desirable. This is down to the materials, the space and the way it is handled – and thoughtful details that make living in close proximity with ones neighbours a pleasure rather than a chore. One has to start with the brick, which is a marker of the project’s ambition to be part of the area rather than stand proud of it as its mothership tower does. The Marziale and Altagres Blanco bricks give a sense of modern steadfastness. The standard bond is upturned with vertical bricks on extensive reveals, giving a sense of modulation as well as a filip to privacy in the neighbouring tower (the reveals use a brick slip system onto prefabricated timber panels). With two blocks converging, the brick hit and miss screens also add a layer of privacy as well as interest to the back facades. 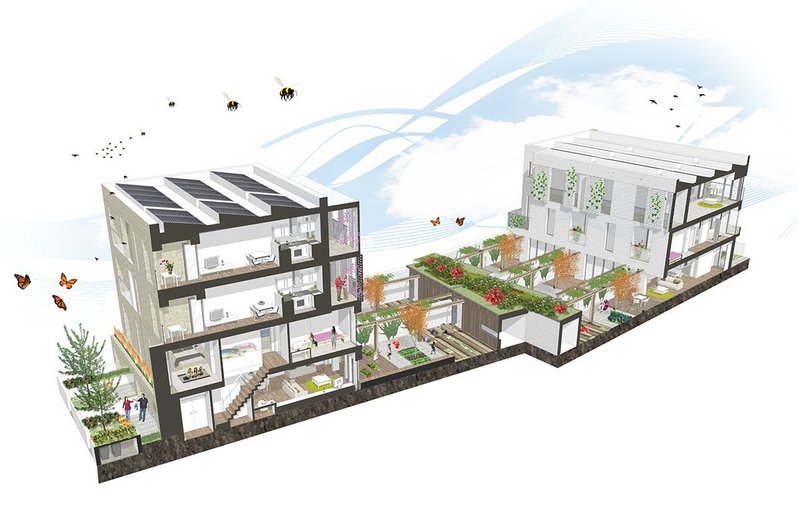 Louise Durant, who has lived in the tower block next door for years, latterly with her three children, was delighted to be allocated one of these 13 new homes from the scores who applied for one. She was touched when one of the neighbours from the terrace next door brought her a bunch of flowers to welcome her to her new home. As she shows us around, it is clear this has not just brought her great pride but that not having to squeeze her older daughter into sharing with two sisters has brought a relief from much tension. And the garden out the back offers her a breathing space and an unlooked for liberation for her younger children – who could barely believe it was theirs. This of course is one of the larger ground floor units. But up the plain stairs a small number of doors open off each of the two walkways, which both have a bench, albeit a roughly finished one, on which to sit, put on boots or deposit plants, making for a more communal space. The maisonettes are over the London Housing Design Guide space standards and certainly feel it – downstairs the circulation, living and cooking spaces flow into one with a great sense of generosity. Other apartments are closer to the standard.

For Islington’s Gale it has been an interesting experiment. ‘It is always useful to have examples to show, it makes it easier to convince people you can deliver improvement,’ he says. Is the model replicable? It was designed to work alongside terraces with cores against existing houses and a density that matches the Victorian grain of much of the borough. So in theory: yes. And the result is pleasing. The dual aspect homes, rather than the double-loaded proposals of some competition submissions, were important in giving tenants’ light and air. But the development doesn’t scream ‘value engineer me’; they are not uneconomically generous. ‘I don’t come here thinking we missed the opportunity for more housing,’ says Gale.

Of course here the budget was ring fenced, which ensured the generous glass onto the garden, and the landscaping itself which has had a lot of thought and materials put into it and its different zones. And if repeated it is unlikely that the brick would be as special due to cost and lead times. McCafferty felt this project was a personal thing for the practice. Its small scale and intense client engagement is the sort of thing that spins out ideas. Whether its lessons in space, material modulation and care are applied by Islington or not, they will inform the not insubstantial work of Levitt Bernstein.

Form of contract: Design and build

Size of home which is principal offer: 72m2