A window on Dublin Bay – at the prow of the Lexicon library. Credit: Dennis Gilbert

This winner of an international competition is set on a narrow plot, rising and ­narrowing to face the sea. Of concrete construction and clad one side in granite and the other (facing housing terraces) in brick, its roofline distinguished by a series of nine ventilation cowls, it is oriented around what the architects describe as a central ‘living room’ looking out over the harbour. On the top floor, spanned by precast concrete V-beams incorporating air handling, it rises from a 4.5m ceiling height at its lower end to 13m where its glazed prow looks out across Dublin Bay. As well as the adult and junior library, the building contains a busy programme including an auditorium, art gallery, café, and history department.

Officially named the Lexicon and largely naturally ventilated, the €36.6m building is set in a new civic landscape designed to exploit the 6m slope of the rocky site, previously a run-down park that had once been a quarry: an upper pool in the form of a series of spiralling weirs, and a tree-sheltered green public space. The civic spaces are intended to revive this previously neglected area of town.

Inevitably such a project was politically controversial at a time of cutbacks. The competition took place in 2007, just as economic depression was looming. ‘It wasn’t a linear progression, at times it was touch and go – we were never really sure it would happen until near the end,’ says partner Louise Cotter. ‘It was huge leap of faith by the council.’

But the notion of civic pride is far from dead. Here the idea of aligning the building to point out to sea, with its its long flanks ­defining sheltered public spaces, is the key architectural move on what is a commanding site. This is also quite a calling card for this small practice, founded in 2001 after its three partners – Seamus Carr and David Naessens being the others – had cut their teeth in a ­variety of influential practices including Dixon Jones, Colquhoun & Miller, Rick Mather, Branson Coates and Grafton Architects. This looks like a breakout project for them. 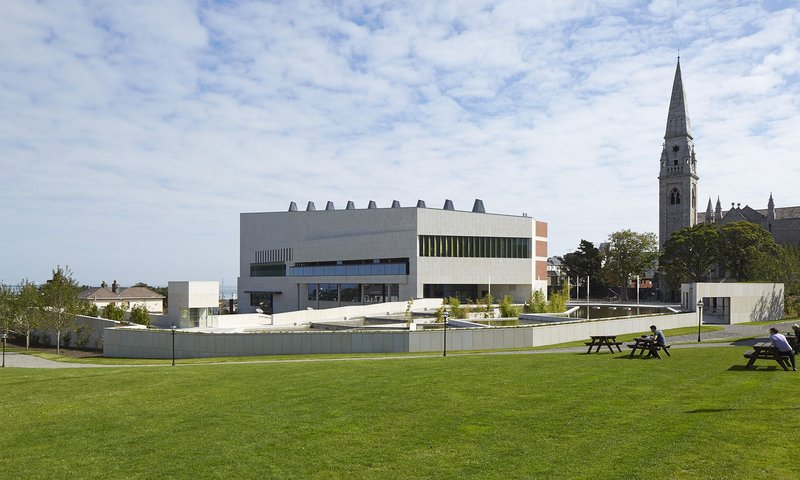