For the nuns of Stanbrook Abbey, it’s been a long journey to find a place to settle. In the remote North Yorkshire Moors, FCBS has built the Conventus a serene home in a spiritual location 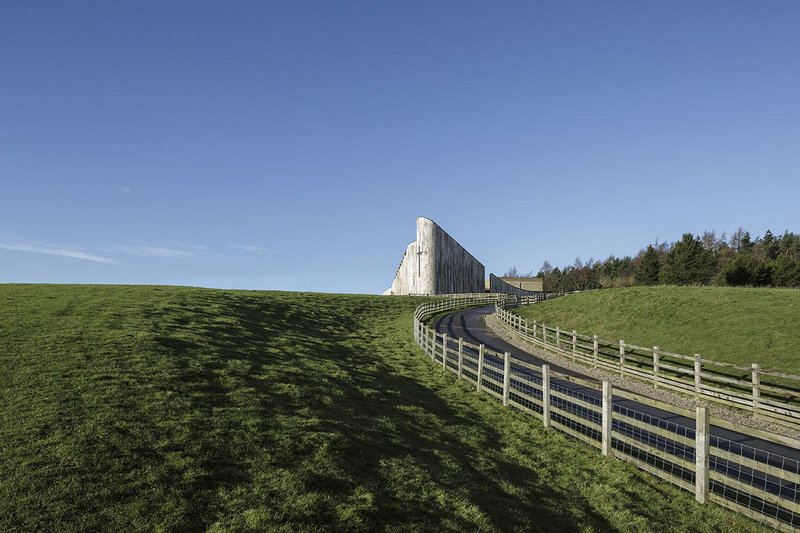 During night-time chapel services, shafts of light from the cross-shaped window strike across the Vale of York from the building’s hilltop position. Credit: Tim Crocker

Deeply emotional and raw responses to aesthetic objects and experiences are rare. In his BBC documentary on Matisse in 2010, presenter Alistair Sooke was moved to tears while visiting the Chapel of the Rosary in France, designed by Matisse at the end of his life. Sooke explained: ‘This is a man who spent his life foremost painting. In this place he has left oil paints behind and instead is working with light… I genuinely feel quite moved by it and I think the reason is that he was so old when he designed it. The fact that he had this final surge of creativity shortly before his death is just so beautiful.'

Feilden Clegg Bradley Studios’ Stanbrook Abbey, the new home and monastery for Conventus of our Lady of Consolation, has two such moments. I can’t recreate the little epic required to reach this isolated part of the North York Moors, but I can retell that of the nuns. And for that, as the Abbess Andrea and Sister Anna did for me, it is necessary to start at the beginning.

Stanbrook Abbey was founded in 1623 in France during Penal Times, when England forbade Catholic religious houses so they were set up on the Continent. The monastery traces its roots back to nine young English women, pioneers of the community’s first monastery in Cambrai – northern France now but part of the Spanish Netherlands at the time. The community remained there until the French Revolution when the nuns were imprisoned for 18 months between 1793 and 1795. They avoided the guillotine and a small band was eventually allowed passports to return to England.

They returned, penniless, and wandered for several years. They rested in Wolton outside Liverpool for 10 years, then in a borrowed house on the border of Worcestershire and Warwickshire in Abbots Salford from 1807 until 1838. In 1838 the community moved to a purpose built monastery by Pugin at Callow End, just outside Worcester, the first property it owned in England. They stayed there until moving to the North York Moors in 2009, but the process of relocating began in 1997 when the community was looking to the future.

‘We lived in a building that was four acres of space, five storeys high, plus a lot of land,’ says Sister Anna. ‘We had a farm just outside the wall of the enclosure and were looking first to adapt those buildings, but that wasn’t possible so we started to look at bigger options.’

The old Stanbrook was built for a different time and situation. There used to be strict enclosures. The community averages between 25 and 35 now, but at times grew to 80. The sisters’ cells, or bedrooms, for example, were designed when nuns weren’t supposed to look out of windows so they were high up, which was hard for the elderly who might be there most of the day. It was also grade two listed.

‘We needed a new lift, proper plumbing, to get the electricity meter redone... the insulation was terrible – all sorts of problems like that,’ explains Sister Anna.

‘Yet we had limited funds,’ adds the Abbess. ‘We were pouring money into the building – money we just didn’t have. Heating bills alone were £6000 every six weeks in winter.’

The idea behind moving and building a new monastery was to escape such mental and financial drains. No high ceilings for heating efficiency; lots of daylight; insulation and other environmentally friendly additions to cut bills: rainwater harvesting, a woodchip boiler, solar panels and a reed bed sewage system.

‘We wanted to simplify life, be able to live our life more fully,’ says the Abbess. ‘The decision to move was made in 2002. We had no idea what we wanted; again we were opening all gates and seeing what was there.’

The sisters looked at properties as far south as Devon and as far north as Cumbria.

‘We kept being drawn back to Yorkshire. There were two properties we almost took. One wasn’t practical and the other we got gazumped on, but we lost that property on the Monday and on the Saturday Anna got the brochure for this property. It was obviously meant.’

And in the grand scheme of things, it feels like the nuns have come home. North Yorkshire has many ancient monasteries, several of which fell into ruin during the Reformation: Fountains Abbey, Rosedale, Mount Grace Priory, St Hilda’s. Stanbrook Abbey looks down onto Byland Abbey. Rievaulx Abbey is four miles away. The idea was that their brethren at nearby Ampleforth were modern monks and they at Stanbrook Abbey would become modern nuns.

‘Monasticism has its roots here. We are living by the same rule as those lost abbeys so it felt right and it fitted the aspirations of the North York National Park, which is very aware of its monastic history. We will build on these roots and re-establish them.’

The nuns bought the property in 2004. There was a farmhouse on top of the hill up the drive, but the main advantage was its nine Scandinavian holiday lodges which were an immediate source of income. The area of the new building, however, was just a playing field. But did they buy it with a planning application in place?

‘You’re kidding! We did everything the wrong way. We did it on a wing and a prayer,’ says the Abbess.

‘We bought a property that had good quality buildings on it, good land and the lodges, so if we didn’t get planning permission we anticipated that we wouldn’t have problems selling it on again. But at the same time it was very nerve-racking preparing the application, meeting the people that we needed for advice and to make ourselves known to them. Then lo and behold, we did get planning permission – much to everyone’s surprise,’ recounts Sister Anna.

Though inevitably, it wasn’t just the case of getting permission from the local committee. The site is in a national park. Their plans had not just one hoop to go through, but two; first the planning committee and then the deputy prime minister’s office.

FCBS was selected as architect at the time the first site was found, for its sensitivity to the community’s needs and its experience at Iona. The final core building – with 26 ensuite bedroom cells, refectory, chapter house and work rooms – was completed in 2009, while the sale of the old abbey released the funds to allow the recent phase to be constructed; the parlours, church, chapel, guest house and conference room in what is the east wing. Stage three, the library and archive, will come later on the west side of the building. Those things at the moment are ‘in the mind of God and his financier’.

What about the style of the commission?

‘One of the points made in the narrative part of our application was that the Benedictine monastic tradition has been going for 1500 years and it has survived by blending into its environment,’ explains Sister Anna.

At first the nuns were interested in curving organic forms but the qualities they valued most were simplicity, tranquillity and calm. The main living areas are therefore arranged in a simple orthogonal plan providing restful vistas and axes, with a cloister acting as the focus. Access to the building is from the east side; views and sunshine are to the south. All shared areas therefore had to be positioned on the east side, with service areas to the north, leaving the west and south sides to enjoy uninterrupted privacy and views.

The church and chapel, however, provide a more organic counterpoint to the orthogonal plan. The church is designed around the two liturgical axes inherent in the teachings of St Benedict. The Eucharistic axis is derived from the monastery geometry and focuses on the altar: the Monastic sets up a counterpoint running diagonally across it following the structural geometry of the building as it rises from the congregational entrance through to the high point of the church.

In all, the building is now much more manageable on a human and financial level, and socially in terms of the community being able to live together on a smaller scale. It is more appropriate too for life in the 21st century.

‘It has freed up time,’ says the Abbess. ‘We are not looking after four acres of building now. You obviously have to take into account that it feels like we have been building since 2007. Just to get here is remarkable.

‘The community is happy it moved, but it loved the other building as well because that’s where many of us made our solemn professions. Yet we knew this was right. We used the phrase “choosing life” which we took from Deuteronomy; you can choose life or death. If we had continued living in that other building it would have killed us. We had to do something to give new life to the community. We can run this building.’

Knowing all this – the long relationship the architect built with the client, how it has secured the future of the community, the slight naivety of the client but also its courage, the site’s long monastic links, how the monastic life confronts everyday realities – finding a plot, getting gazumped, shortage of funds – I hope you too feel your breath taken away by the view of the new monastery and church with its cut-out cross at the end of the drive up the hill, and by the stillness and serenity of the church hall.

Returning to Alistair Sooke: ‘Matisse said that all his life he was trying to create a sense of calmness in his art and he said the reason was that he himself was in need of peace… Matisse suffered from that throughout his life and in his work he created something which eased that.’

For Stanbrook, as for Matisse, what else can you ask of a great work of art?