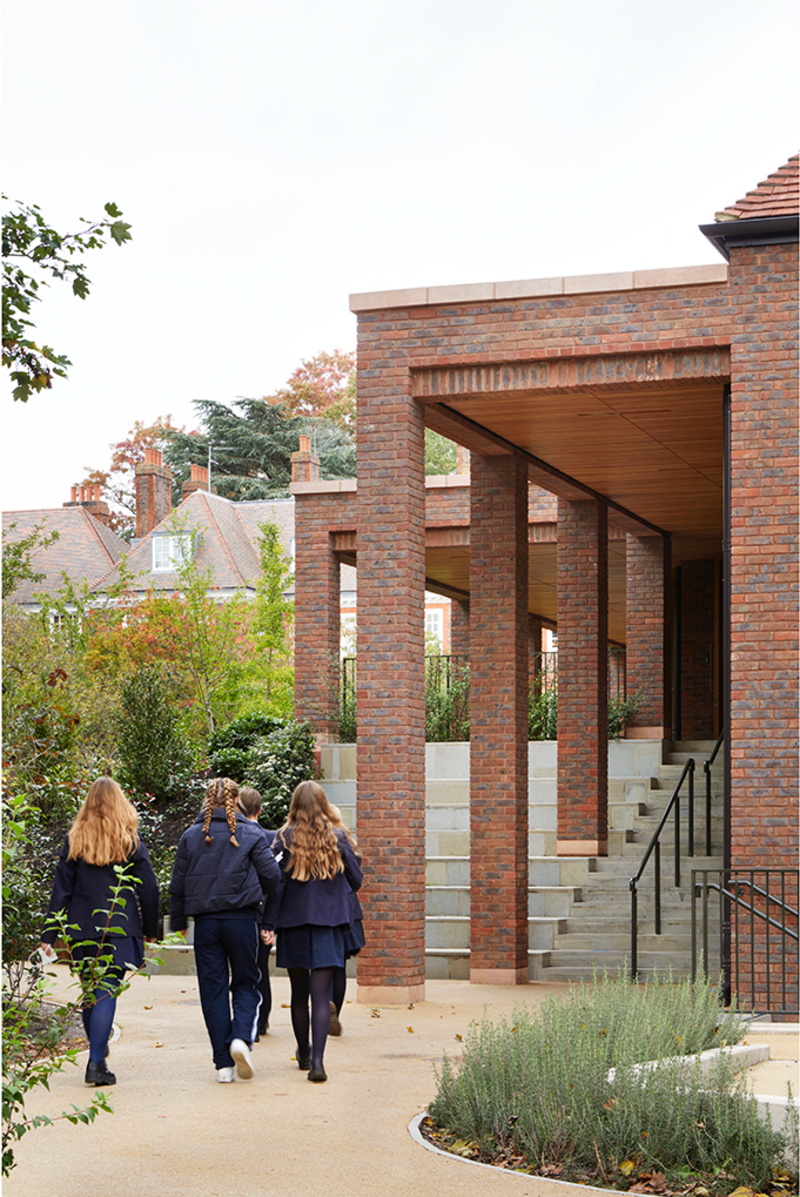 The southern end of the refectory with the original house in the background. Credit: Jack Hobhouse

This project, a refectory for Ibstock Place School in Roehampton, all started with a sketch by Richard Lavington which broke down the brief into three simple attached volumes: a kitchen, a servery and a dining hall. ‘It’s a once-in-a-career project,’ explains associate and project lead Tom Waddicor. ‘The school loved the concept and wanted it to be built as it was conceived. The work was in delivering the detail.’ And this is what Maccreanor Lavington has done in a very undistracted and precise way.

Ibstock Place School is a co-educational private school in south-west London which runs through from nursery to sixth form, and the new building provides lunch for all years. The school is split across two sites diagonally opposite from each other over a main road, next to the Alton Estate on one side and Richmond Park on another. One site is primarily for the sports fields, the other is for teaching. The school was founded in 1894 in Kensington but moved in 1946 to occupy the house and grounds of an elegant 16-bedroom Edwardian mansion designed by Frank Chesterton and completed in 1913. The house still provides the entrance and main school building, set back from the road, while the rest of the buildings are set out around the original landscaped gardens to the rear with an indoor swimming pool in the position of the original 1920s outdoor pool. Buildings cluster between and around an orchard which slopes away from the house’s terrace. ‘It’s a landscape-focused campus,’ says Waddicor. Department buildings nestle between existing trees, with pupils crossing the grass to their next lessons, under the blossom in spring.

The previous school refectory was sited to the east of this orchard along the boundary, abutting the main house terrace at the northern end. It was built in the 1990s in a conservatory style that had a short lifespan and was added to in a piecemeal fashion as the school expanded enormously over the next 20 to 30 years. There are now 1,200 pupils and an accompanying large staff body and the building was not coping with circulation flows and capacity. As part of an invited competition in 2016, Maccreanor Lavington looked at what it could reuse but ultimately decided the building needed to be completely replaced. The new three-part building sits on roughly the same footprint but from a 580m2 floor area creates 1,950m2 by including a basement, mezzanine and hidden sixth-form study room in the loft.

‘The school wanted to make as much space as possible,’ says Waddicor. ‘We wanted to keep it in the same position at the heart of the school so people would look out to the orchard while having lunch. And we wanted to make it about the roof – low and secondary to the main house but maintaining volume; a kind of country house with a barn.’

The three-volume form provides glimpses of the trees beyond, allowing light through the slots between the three roofs. The team spent time studying Lutyens’ country houses for ideas on how to manage volumes using low eaves that step down to deliver huge but not overwhelming houses – as well as learning from his attention to materials, bonnet hips and roof pitches. Other inspiration came on a minibus trip to Oxford to visit Arne Jacobsen’s refectory at St Catherine’s College, where everything was designed by the architect down to the cutlery. This inspired the idea for individual desk lights in the sixth-form area. The team also stopped off at Duggan Morris’s Alfriston School swimming pool to see the vaulted ceilings and at Níall McLaughlin’s Bishop Edward Chapel. You can see the influences.

Externally, the three initial volumes resemble joined pavilions, bridging the change in level down the 60m-long site. The hall is at the northern end, servery and small hall are in the middle, and kitchens are to the south with access to the basements, which contain storage, the maintenance office, plant and kitchen staff welfare areas, forming a scattered plan around tree root protection zones. The low-hanging eaves and cloister, added to the design in the original sketch, allow pupils to queue outside, covered from the elements, before being let into the central volume, while also creating a softer human scale and edge to the orchard lawn.

The material composition of the façade also comprises three elements: brickwork; precast concrete coping, tinted slightly red; and handmade clay tiles, which will weather over time, adding variation and texture. The bricks and tiles were sourced from the same clay area in Sussex and chosen to complement the bright red coins and dark red walls of the main school building.

‘It’s no secret that Maccreanor Lavington loves brick,’ adds Waddicor. ‘It’s often the obvious choice – easy to handle, durable, weathers well – all the reasons it would have been used on the main house. We wanted the building to feel part of it.’

Only the soffit and timber curtain walling on the western elevation within the cloister give a hint at what awaits visitors stepping inside. Here the contextual brick and tiles give way to a series of magnificent cathedral-like spaces. Timber surrounds visitors on all sides, creating an enveloping internalised environment focused on the social aspects of eating. Visitors enter through the central pyramid via a small lobby. In the foreground is the ‘small hall’ with freestanding tables as well as banquet seating within four bays. The roof soars above, enclosing a mezzanine dining space for sixth formers. To the back on the ground floor is the servery, which is attached to the south to the kitchen, the smaller of the three volumes. Otherwise, children continue through a sliding partition to the main hall – a completely free space where the pyramid form rises above unencumbered. While primarily a dining hall, the space can be rearranged for performances, events and assemblies.

‘The hall is a celebration of space, we wanted it to have grandeur and a ceremonial quality for moments of coming together,’ explains Waddicor. ‘Timber was chosen to limit the palette of materials. Maccreanor Lavington is pro-timber in general. We have used CLT in a lot of schools. It has low embodied energy and is a carbon capture, but we selected it for its natural quality that is welcoming and inviting even in big volumes.’

The structure is formed by a thicker primary and thinner secondary diamond lattice grid, supported by columns at ground floor. The practice tried to source oak glulam but couldn’t find a UK supplier so settled on spruce as an efficient fast-growing timber. The spruce sets the grid, which has only four different shapes so they could be manufactured offsite, while everything else is oak, recalling the central stair of the main house. At ground level the panelling is solid; on the ceiling the slats are backed by an acoustic fabric screen on Rockwool insulation. The whole space is designed with acoustics in mind, mitigating noise build-up from the cutlery, chatting and constantly circulating bodies over the busy two-hour lunch period.

Slotted between the three pyramids are flat-roofed areas that accommodate further circulation with stairs directly accessing the sixth form spaces in the lofts. In the mezzanine, Ercol chairs pick up the diagrid of the roof. Above the kitchen is the sixth-form study room, added to the brief to make the most of the building heights. Here, the oak slats hide the structure to create a deliberately secret, private feel, more intimate and calming than the exposed structure elsewhere. An end picture window gives expansive views south on to Richmond Park.

Across the building, light is mostly brought in by the three crowning lanterns, avoiding the need for many windows on the eastern side, which protects the privacy of both the school and neighbouring homes. These lanterns also help provide the natural ventilation with louvres that open. In contrast to the domestic-scale timber windows within the cloister, these are made of anodised aluminium and sit very tall above the roofs to provide the necessary heights for stack ventilation. It is the only aspect of the project that feels incongruous. Although there is something greenhouse about them that might have been appropriate to the orchard landscape, their deliberately dark glazing system and particularly elevated height does seem to overwhelm the serenity of the façade and low-rise feel of the rest of the scheme. But it’s a small point, that disappears when you see the drama they give inside.