In an inflationary world, Magdalene College’s historical sense of itself as one of Cambridge University’s poorer institutions, seems on point. Yet it’s just spent a good few million on a lovely new library. For its 600-year history has been something of a financial rollercoaster.

Founded 1428, Magdalene is one of the city’s smaller colleges by size, but in terms of assets – just shy of £200 million – it punches above its weight in the Cambridge University rich list.

The fact that the college maintains a Cistercian silence on the library’s cost stems from its humble beginnings as a Benedictine monk’s hostel. A lucrative land legacy from post-Dissolution owner Thomas Audley was lost in 1574 in a bad – but legal – sale to shrewd banker Benedict Spinola, forcing it to go begging to get its First Court finished.

Time has brought financial security if not psychological closure; set in the opposite river bank, a 1989 gargoyle of Spinola, commissioned by Magdalene, is destined to gawp at the college – and at his own waterboarded reflection when he’s a storm drain – until, perhaps, he finally coughs up. Despite the college’s clear wealth, past penury has instilled a moderation that shines through in Níall McLaughlin Architects’ proposal for its new library, won in a 2014 invited competition. NMA associate Tim Allen-Booth says that the firm was struck more with the medieval simplicity of the college’s plainly-named First and Second Courts than with the sophistry of its existing Pepys Library, and you can see why. Walking from the porter’s lodge, its Tudor red-brick First Court, modest by Oxbridge standards, bears all the charming hallmarks of contingent repair and infill over time. Passing the Dining Hall (the only in Oxbridge not served by modern electricity) on to the 1909 mock-Tudor Second Court, it’s the centrepiece 17th century, grade I listed Pepys Library that comes across with the shock of the new.Built over 70 years and victim to vagaries of taste, the court side of the red-brick Jacobean building is a distinctly uneasy classical facade of Ketton stone, its curious double gables – of which the faux inner pair serve only to hide chimneys – bookending its west face and odd loggia. Though its wroughtness might recall the grandiloquence of the famed diarist whose collection it holds, it seems an anomaly out of keeping with the college’s general restraint or modern student needs.

Out of respect to Pepys perhaps, the architect picked up on its – albeit scrambled – notion of gables and chimneys while making a sensible decision to run with Magdalene’s calmer and more pleasing red-brick materiality; an aspect that creeps up on you gradually as you pass through a small gate to encounter the new library beyond two gnarled yew trees. With a  crisp and strong exterior articulation, it’s surprising to hear Allen-Booth say that it was designed from the inside out, with the exterior resolved only after protracted client discussions – ones that proved pivotal. The firm’s initial design for a grand three-storey volume facing east, enjoying the ancient Fellows’ Garden, received polite push-back from the college. It was enamoured with its timber interiors but felt its ostentation would be counter to the college’s sense of modesty. Its response, to flip both position and scale of the sectional move from east to west sides, fundamentally shifts how one experiences the library, with the best views now reserved for the most intimate reader spaces.

In turns out that this resonated better with the architect’s ideas. Allen-Booth claims intimacy was the prime driver, starting with the physical experience of the solitary reader and multiplying the tactility of brick and oak; that ‘the library be an aggregation of the single reader space’. So the sense of modularity you perceive on viewing from the outside is exactly that – 12 three-storey, 4.7 metre square modules in plan, connected to each other by 1.3m wide corridor links that all tesselate cleverly around a constrained site to generate the building’s massing.

To the south, the central of its three modules denotes the library’s formal entrance, reached via a circuitous yet apt route around the old yews; to the west, a further three bays, two of them blank, will defer to respect the privacy of the Master’s Garden. Stepping back and out on the north side, three rear ‘service’ modules, containing stairs and toilets will accommodate the curio of the college’s pet cemetery and its boundary wall, before culminating at five bays on the east, offering broad garden and river views up to its picture gallery and the humble readers sat atop it. All ostensibly the same module but, so arranged, all performing different tasks.

Collectively too they create a strong formality, each module defined on its corners by 660 x 320mm brick piers, some hollowed out at high level to act as vents – part of the library’s natural ventilation strategy. And if each module is a housing for its readers, then each merits a roof and chimney, a glazed gable on each side – far enough away from each to allow light into the building and near enough to shade and ensure it is not excessive. These contribute to the special feel of the building interior, a cooling breeze slowly passing through the space and shards of sunlight creeping around brick piers, whose spanking new redness is mitigated by a smaller brick size and thicker mortar joints, to better match the college’s existing walls.

Intimacy was the prime driver, starting with the physical experience of the solitary reader

Internally, that decision to down-play and flip the three-storey volume from the garden side to the west plays out engagingly – as do the modules themselves as they interconnect in surprising ways. Here, the only three-storey experience is at the entrance, where a sole reading room nestles into ground floor archive and garden-facing picture gallery. But what it lacks in size it makes up for in drama, soaring full-height and with a great west window letting light pour in beyond its deep oak baffles.

The building’s modularity shows within, as do its Baroque qualities as the reader moves through it. At first floor, one module’s width is ennobled in a four-module long, double height reading room. Long central tables run its length; these as well as all other fine joinery are expressed in oak where the hand can touch it. But that’s counterpointed in the whitewashed, raised grain finish of a fire-treated spruce CLT floor and glulam beams that run throughout, sitting on precast concrete lintels that span the 1.3m corridor zones from brick pier to brick pier.

Joined by a north stair, reading spaces go from discrete on the first floor to interconnected on the second, the latter gifted the view down past the double height volume and beyond in a long diagonal west to the ground level of the triple height space. Here, the interplay of corridors with modular volumes and brick piers creates a lovely perspectival layering, worked into even further by holes cut into bookstack floors to connect with reading spaces below, yielding complex spatial plays even out of repetition. It also generates a variety of study spaces; both collectively and individually, with some built-in desks nestled discreetly among bookshelves or others – notably one lording it over the entrance volume with views out to the west window extravagantly exposed; responding with sophisticated architectonics to neurodiversity demands. Taken as a whole, it’s delightful. 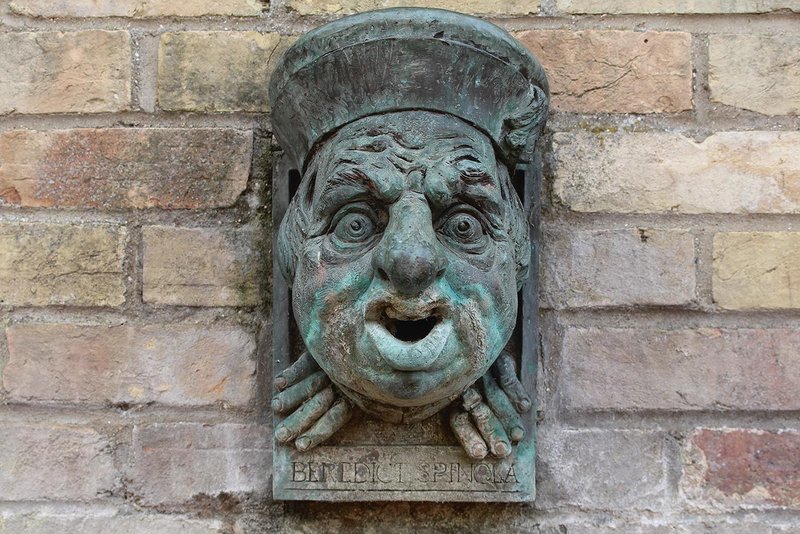 A modern gargoyle of Benedict Spinola set into the river wall of ‘Quayside’, directly opposite the college’s bank Credit: Magdalene College Cambridge

Architect and college fellow David Roberts built Magdalene’s New Master’s Lodge in 1966 – though it’s telling that the college later replaced its failing modernist flat roof with a pitched, plain clay tile, make-do one. Over his career, Roberts built more buildings for the university than any other architect, but Niall McLaughlin, with 15 Oxbridge projects built or on the go – in his more ‘local hero’ than ‘heroic’ new contextualism – might just match that record. Not surpass though; for Magdalene at least, the excess simply wouldn’t do.