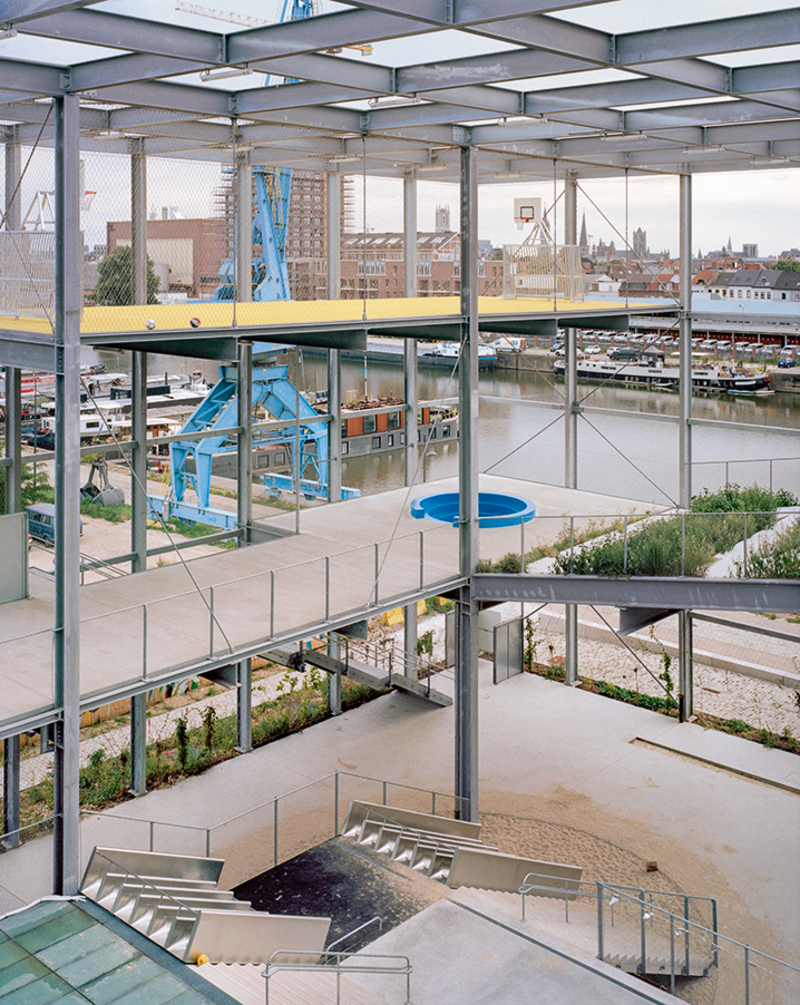 At Ghent’s Melopee school, many functions are stacked within its steel grid box – and that includes the playground. Credit: Maxime Delvaux

A primary school,  after-school care centre, nursery and – at the top – indoor and outdoor sports facilities for both school and neighbourhood: at Melopee, in Ghent, all are stacked together in an urban biotope where architecture becomes landscape in a ‘green’ building.

Designed by Xaveer De Geyter Architects (XDGA), the new building has been baptised ‘Melopee’, after a poem written by Paul Van Ostayen, one of the Lowlands’ greatest modernist poets. The verse captures well the still, canalside nature of Ghent’s Old Docks, on whose quays the new facility has been built. Playing a major role in the 19th century during the city’s industrialisation, the docks’ recent history proved to be less poetic; and when the port facility was moved further out to deeper waters, they were left behind, somewhat marooned.

In 2004, the city’s development administration, AGSOB, launched an urban development competition ‘City design for the Old Docks project area’, which was won by Dutch firm OMA. It proposed a clever ‘chopstick’ model, in which buildings along the waterside were interspersed with fingers of green public spaces. The plan created ‘fluid’ green spaces bringing more ‘air’ and quality from the waterfront deeper into the masterplan area. 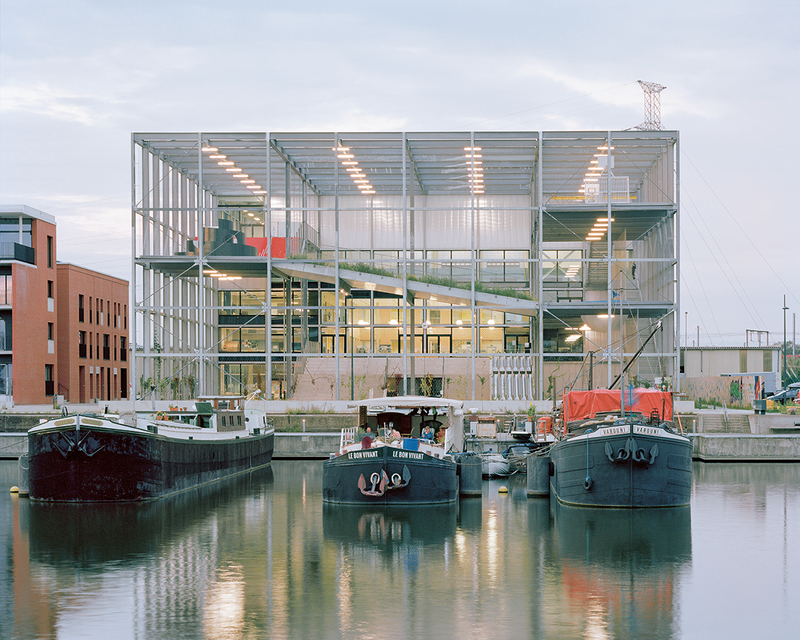 At Ghent’s Melopee school, many functions are stacked within its steel grid box – and that includes the playground. Credit: Maxime Delvaux

The Old Docks is an important part of Ghent. This quarter will get about 3000 new dwellings which, in a city of just 260,000 inhabitants, counts as a sizeable development. As well as extra offices, it  was obvious that this new city quarter also needed such public services such as a school, nursery and sport facilities, with the result that this ‘city building’ was conceived and planned in the heart of the development area.

To grasp the genius loci of this place, it’s crucial to understand  that some years after OMA’s urban plan was embedded in the masterplan, the city was keen to promote cultural activities on the site. From 2011 onwards, temporary ‘occupations’ became the order of the day and cultural activities began taking place on sites along the Schipperskaai, making this area ‘a site for relaxation and creative manoeuvres’. The so-called DOK summers became real and regular attractions, with cosy flea markets, performances, and visitors just chilling on the urban beach.

The city encouraged the Old Docks’ meanwhile uses to open up this formerly quite closed area and to show its potential as a lively, inspiring and adventurous area. Its historic buildings and harbour infrastructure were envisaged to be used as anchor points in the new city quarter. It was an approach that was the antithesis to the modernist paradigm of tabula rasa and the creation of strictly zoned, monofunctional areas; and it’s fair to say that XDGA took on these aspirations as part of the design essence of Melopee.

De Geyter started his career at OMA but, since founding XDGA, has built an international reputation for unpretentious, tough experimental architecture and urban design. Beside his practice as an architect and urbanist, in 2002 De Geyter has written After Sprawl, in which he examines the phenomenon of urban sprawl. Via his research he distilled a method for analysing spatial hallmarks of today’s city and investigated new ways to supplant old urban strategies. Rather than just complaining about sprawl, he explores ‘the cracks’ in the urban condition and turns them into opportunities to create spatial quality. To do this he has developed different interventions, formulated in such keywords as: shift, overlay,insert, hide, frame, found, connect, array and add.

Here at Melopee, it looks like XDGA implemented this urbanistic practice as a tool for creating a building, despite the fact that the practice was facing quite a challenge. The school, after school care centre and sports facilities were given a relatively small plot of land. Not only that, but the masterplan demanded a public right of way through the site. This complicated the school’s layout, particularly the organisation of a controlled, observed playground for pupils. It was clear that on the ground floor, a link between building and playground limited, if not impossible.

XDGA responded with enthusiasm, developing a 3D playground stretched out over five floors. Some of these are curved or inclined planes, over which a path meanders between plants, creating the illusion of a hill. All the playgrounds are attributed a certain colour or geometrical structure, as if the architect has translated the principles of human structures and archetypes that Aldo van Eyck applied at the playgrounds he designed for Amsterdam city government between 1947 and 1978.

Given the playgrounds’ surface treatment, set in the grid of concrete and steel, the perception of and tactility of the space seems driven by the mineral, abstract language of Zen gardens. Rocks are scattered like a Richard Long land art installation, while a circular sandbox is cut out of the concrete floor. But this sandbox is used also as the landing pit for a set of slides, situated alongside the steps to the first floor.

The magic of these playgrounds, whirling down from the fourth floor, is that they are connected, framed in a huge, ‘green’ cage; all these outdoor spaces read as part of one big stacked room. As the outdoor space takes half of the plot, XDGA decided to frame this within a fence with climbing plants. Strategically placed cut-outs create windows on the urban landscape and connect the inside with the city centre; and the structure of the fence echoes the steel structure of the building. Simple use of I-beams creates a spatial grid integrating building and playground. Beams passing over the playground imply a notional ‘ceiling’, lending a pleasant intimacy.

Surprisingly, the playful structure of open and closed surfaces of the building and the playground possesses an elegance reminiscent of Terragni’s 1936 Casa del Fascio but with the physical complexity of a Rubik’s Cube. Here, the internal pivot mechanism is replaced by a double height multi-functional hall, which can be used as indoor playground, cafeteria, theatre, etc. The hall is situated on the first floor, and opens up to a big terrace from which kids can slide down to the ground floor. Formed of pink-coloured brick, it acts like vibrant theatre, overlooked through large glazed panels by classrooms and the corridors that serve them. But with its glazed panels and the spaces’ general open character, there’s a pleasant continuum suggesting that classroom and corridor can be used as one pedagogical space.

A challenge for the architect was to create an ‘open school’ that was accessible after hours for local people to use. An indoor sports hall on the third floor can be reached via a lift or stairs in the corner of the main building; from here it is also possible to break out over the terraces of the 3D-playground as part of the escape route. This becomes a key feature, creating a direct connection between the indoor sports hall and the outdoor basketball court ‘hanging’ in the metal cage. Here, the architect arranged the services on two sides around it, to create a balcony above one wing from which the games can be watched. Making a balcony not only introduces an additional key function to the escape route, it also visually connects the hall with the wider landscape of the city.

The Rubik’s Cube analogy fits this building well, because the spatial layout provokes a dynamic spatial condition that triggers curiosity, exploration and play. Stimulating pedagogies aside, XDGA has, at Melopee, suggested an alternative to the institutional and traumatic format of school design. 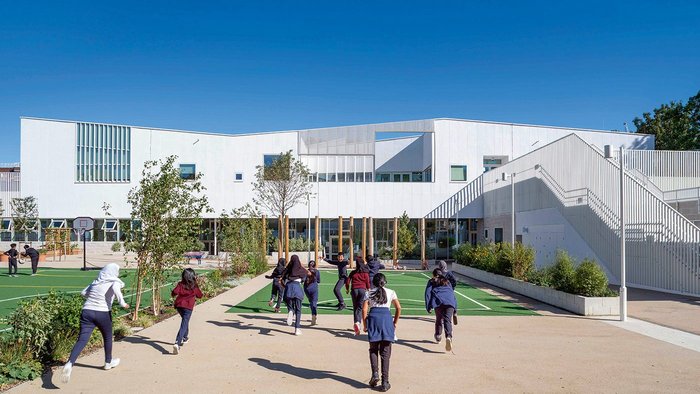